Awesome Kong back to TNA? 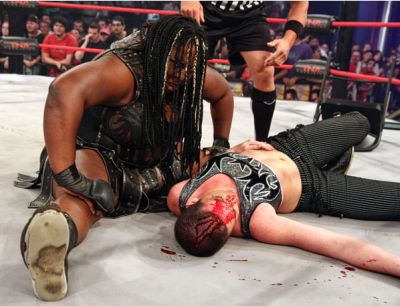 Since Bubba the Love Sponge has now been released from TNA, is it best for the company to re-sign Awesome Kong?

On March 1, 2010, Awesome Kong was released from her TNA contract. The reason was because Bubba and Kong got involved in a backstage altercation after some racist comments were made by Bubba. Awesome Kong was simply raising money for the brutal earthquake that took place in Haiti. Bubba comes along, and makes some very rude comments towards this fact. Afterwards, the two got involved in a fist fight since Awesome Kong took the entire incident quite seriously.

Everyone knew that Bubba would not be the one to get released because he has friends in high places. It’s no secret that the only reason why he even had a job in TNA was due to his real life relationship with Hulk Hogan. And as expected, Awesome Kong took the full brunt of the incident. While it was clear to many fans that Awesome Kong is much more valuable to TNA than Bubba.

A few months later, Bubba got involved in another incident with Kong, but this time, he was released. TNA probably realised that it isn’t worth keeping someone so worthless on their roster. They have plenty of backstage announcers who are much more talented than this guy. And in general, he didn’t make the product anymore interesting than it already was. Awesome Kong on the other hand, was the exact opposite.

The Knockouts division actually took  a pretty big hit after her release. A large portion of viewers that watch TNA’s Knockouts division is because of Awesome Kong. Her size, and her in ring ability is what makes her so valuable. Her character works especially well in TNA’s women’s division. It won’t be as effective in other promotions, such as WWE or even the independent circuits.

It’s definitely in TNA’s best interest to re-sign Kong. It doesn’t look as if she’ll have any problems anyway because Bubba has been released. Everyone else backstage is perfectly fine with her and she hasn’t had any problems with any other wrestlers from TNA’s roster. There’s no other female wrestler that adds more depth to the Knockouts division than Awesome Kong. Bring her back.