Home / Miscellaneous / B. Brian Blair talks about his heat with the Iron Sheik

B. Brian Blair talks about his heat with the Iron Sheik 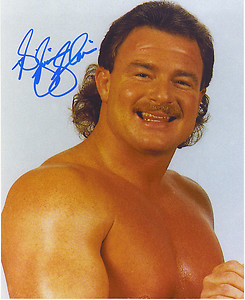 Former WWE star, B. Brian Blair recently sat down together with Steve and the Scum on WGD Weekly for a very candid interview. Blair discussed all stops in his great career during his time on WGD Weekly. The entire interview can be heard here:

The origins of the heat between himself and the Iron Sheik: “…It really started in Hershey, Pennsylvania. Sheik and I used to always take each other down, we could both wrestle, you know, and hook…In Hershey, he was messing around, and for some reason, he shot on me and took me down. He tried to ankle pick me and hurt my ankle, so I double wrist locked him and turned him around and he started screaming. Everybody saw that, you know, Volkoff, everybody saw him screaming like crazy, and I’m not letting go. I said, ‘I’m not going to let go until you tap, so he tapped and I think that was a blow to his ego and he never liked me after that…”

The incident where Iron Sheik slapped him: “…all of a sudden out of now where, the Sheik slapped the pee out of me. I don’t know why he did that, maybe he was trying to create his own angle…all these fans had paid to see this deal. I wanted to be like I always am, the consummate professional, so what am I supposed to do, beat up the Sheik right there? I’m thinking to myself, ‘ It’s a roast for him, this is really not a good situation.’ So, he kept going, then I went my way! he went his way, but believe me the heat kept escalating from there, you guys have heard it all, but I honestly think it all stems back from Hershey, Pennsylvania, and when he had to tap out…”

A first hand account of the horrific boating accident involving Brutus Beefcake: “…I was there, I remember it like it was yesterday… Beefcake knew exactly how to do what he was doing, he was even giving people instructions…Once you hook the parasail to your back, you’ve got to run on the beach as fast as you can, and then lift your knees up, then the sail picks you up…he made one mistake, all it takes is one mistake…for some reason, Beefcake turns to the left…she lifts her knees up and it was like a battering ram…that knee hit him right in the mouth, and he was down…I ran into the water, and I grabbed him… I pulled him up on to the shore…He was still conscious…I tapped him on his back and said are you ok…I was saying, open your mouth, open your mouth…then I realized, his whole face from the top of his nose down was fractured, and his front teeth were on top of his bottom teeth…he could not talk, he couldn’t open them…he is really lucky to be alive…”

The Killer Bees being promised the WWF Tag Titles several times but never actually getting them: “…Why it never came to fruition is beyond me…We were promised three times that we would be the champions. It was a big deal for us and every time it was like, wait, wait, the money is in the chase, let the heels have the belts…Not getting those is what made me leave, and Jimmy stayed …it’s sad that we didn’t get the belts, it really is. We deserved, them, I’m not just saying that, I know we deserved them…”

In addition to more detail on each of these topics, Brian also spoke at length about, his childhood dreams of becoming a pro wrestler, his football days at Louisville, going to Florida and training with Hiro Matsuda, meeting and working early on in his career with Hulk Hogan, his friendship with and working in the ring against Bruiser Brody, his time in Kansas City and Central States Wrestling, feuding with Jesse Ventura, his first run in WWF, working for Vince McMahon, Sr., being in the locker room with Hulk Hogan and discovering Vince, Sr. was dying, World Class Championship Wrestling and the Von Erich family, a road trip with Paul Orndorff, Tony Atlas, and Tommy Rich that turned into a brawl on the side of the road, returning to the WWF, being paired with Jim Brunzell and being named the Killer Bees, working WrestleMania 2, 3, and 4, the great tag teams of the WWF in the 1980’s, working with the Hart Foundation, a Mr. Fuji rib story, an backstage dispute at WrestleMania 5 with Vince McMahon, continuing to wrestle right up through the current time on the Indys, and so much more.