By OWW Contributor on January 4, 2016@owwcom 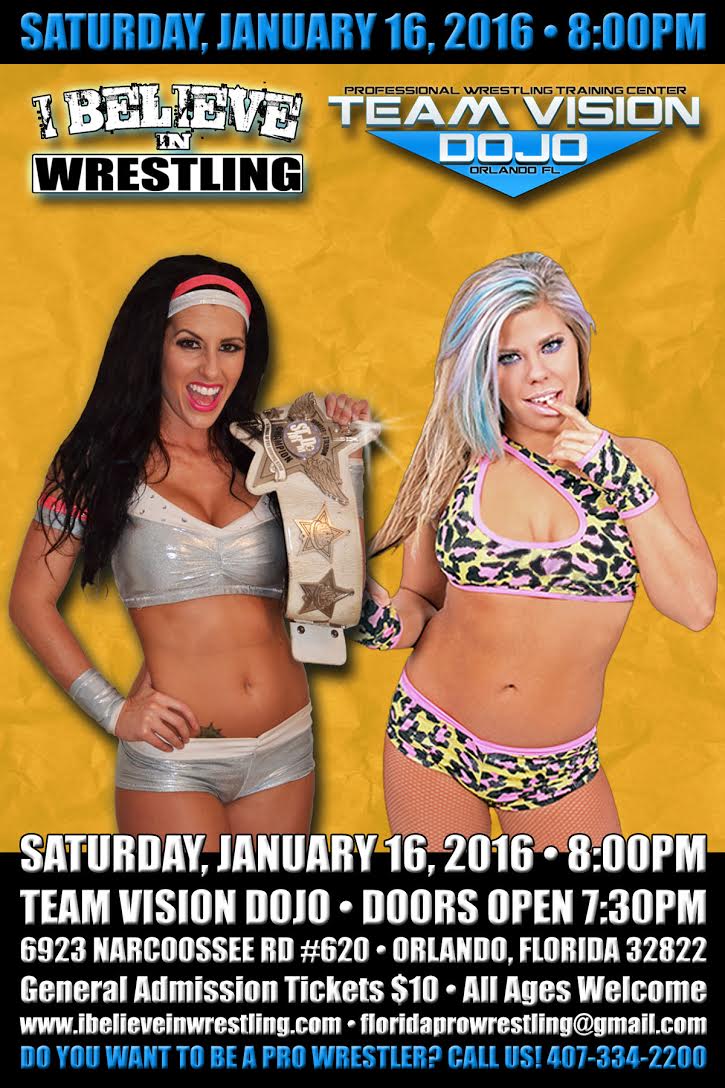 Eleven months ago Santana Garrett defeated Barbi Hayden for the NWA World Women’s Championship in Florida. Barbi hasn’t been to a Florida wrestling event since nor received a rematch anywhere. Tonight at the Team Vision Dojo before a standing room only, Barbi confronted Santana.
Santana pinned Slade Porter in an intergender match pitting her and the “Purfect 10” Lince Dorado against two male counterparts in Porter and Rex Bacchus. After Lince was interviewed, Santana’s interview was cut short by Barbi Hayden who was in the crowd. Barbi had recently moved to Orlando supposedly to have a better chance with the WWE. However, she came in tonight with a purpose. Barbi challenged Santana for her deserved rematch but this time for the Stardom title, and Santana gladly accepted.
If Santana loses the title, she also loses her Japan tour to Barbi. There is enough time to have the visa processed before the next tour which begins in February. The match will take place in less than 2 weeks on Saturday, January 16 at the Team Vision Dojo for BELIEVE 115.
FULL RESULTS
I Believe in Wrestling ( BELIEVE 114 ) at the Team Vision Dojo in Orlando, FL – January 2, 2016
Match 1: Santana Garrett & Lince Dorado beat Slade Porter & Rex Bacchus when Santana pinned Porter with the Shining Star Press at 15:25
* After the match while the winners were being interviewed, former NWA World Women’s Champion Barbi Hayden interrupted and challenged Santana for the Wonder of Stardom title (and her Japan tour) on January 16
Match 2: Tyranus pinned Alexx Light after a Pump Handle Brain Buster at 5:57
Match 3: Brandon Scherer submitted Steven Weiner with a Figure Four at 6:50
Match 4: Braydon Knight pinned Chico Adams after a Curb Stomp at 10:30
Match 5: Mike Reed & Josh Hess beat Gabriel Black & Josh Parker when Reed pinned Black after a Running Knee at 11:19
Match 6: Rhett Giddins pinned Ace Andrews after an F-5 to retain the SCW Florida Heavyweight Championship at 7:53
Match 7: Jonny Vandal & Aaron Epic beat Michael Patrick & Leo Brien when Vandal pinned Brien after a Top Rope Leg Drop to win the AWA Florida Tag Team Championship at 15:14
I Believe in Wrestling returns to the Team Vision Dojo on Saturday, January 16, 2016 with the Wonder of Stardom Championship on the line as Santana Garrett defends that and her Japan tour against Barbi Hayden plus much more to be announced. Tickets are available at: www.ibelieveinwrestling.com
More information about the Team Vision Dojo can be viewed at: www.TeamVisionDojo.com or better: flrankings.proboards.com/thread/17917/wrestler-call-team-vision-dojo
Follow on Twitter @ibelieveinwrstl @teamvisiondojo and Instagram @ibelieveinwrestling @teamvisiondojo
Related Itemssantana garrett
← Previous Story 4th entrant in the ECWA Super 8 All Star Tournament announced
Next Story → Upcoming Indy Wrestling Events January 8-17, 2016