Home / Behind the Scenes / Beau James “A Handful of Contradictions”

Beau James “A Handful of Contradictions” 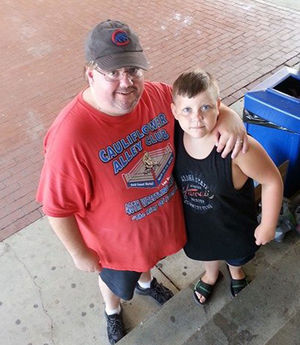 BY LAURA J. MONDUL | SPECIAL TO THE HERALD COURIER:  FALL BRANCH, Tenn. — Professional wrestler “Handsome” Beau James wears many hats. Called the King of Kingsport, Tennessee, James is also an author and a devout Christian, and now he’s become something of a hero.

“Beau is a study in contradictions,” said Donnie Brannen, pastor at Cavalry Baptist Church in Kingsport. “He is part mercenary and part missionary. He makes his living playing a tough guy, and a lot of times the bad guy. But a more tender heart for people you could never find.”

James has been wrestling since he was 14 years old, and his vocation does not lead one to think of a gentle soul. But when he heard about the severe flooding in West Virginia, he jumped into action.

Throughout his career, James has traveled across the country, but has spent most of his time wrestling in the Appalachian region. He has spent a lot of time in West Virginia and said he knows the towns and communities well — many of the communities affected by the flooding are ones that he has promoted and wrestled in over the years.

“West Virginia is a lot like East Tennessee, and in these communities, if your neighbor is hurting, then you are hurting,” said James. “There are a lot of people hurting up there right now. As soon as I saw how bad it was, I knew they were going to need a lot of help, and I told my wife, ‘if not us, then who?’”

James immediately teamed up with Brannen and several others from the church and made a trip to West Virginia. The team took two trucks, two trailers and a van loaded down with supplies — water, cleaning materials, clothes, food, teddy bears for kids and more.

Since his first trip June 27, James has made three other trips to take supplies and assist flood victims. After the first flood in June, subsequent storms have added to the already saturated area and there has been more flooding. Clean-up efforts have been delayed and areas are still under water. The mud left behind is contaminated from flooded sewer lines and septic tanks. Among the items James requests for donations, he now includes shovels, rubber boots, push brooms and mold treatments, which are in high demand in the ravaged area.

“When Beau wants to get something done, it will happen,” said Mikel Cawood, associate pastor at Cavalry Baptist Church. “He is very much a servant. He is passionate and compassionate. He is the kind of guy you want as a friend.”

Many of the people in the communities he is helping recognize James from wrestling. He said people come up to him and talk to him and thank him, although he is quick to point out that he is not there working for pats on the back.

“We are helping people because they need help,” he said.

This humanity is not necessarily what people expect from a professional wrestler, especially one who often plays the “bad guy.” James jokes that he has now ruined his image for a lot of these people.

But he doesn’t fall into the typical stereotype for a wrestler anyway. In addition to pursuing his childhood dream of becoming a wrestler, James is also a published author. He has written an autobiography, a history of the profession of wrestling, and a collection of short stories about his adventures in wrestling and traveling across the country.

Furthermore, James is very dedicated to his church and his faith. Although his father was a pastor, James said he got away from the church after he grew up. In 2009, he rededicated his life to God and to doing the Lord’s work. He often combines his passions and uses free wrestling matches as a means of outreach ministry.

“Professional wrestling is the perfect art form of good versus evil,” said James. “You have a good guy and a bad guy, they have a conflict, and they play it out before you.”

His wife, Misty James, is also a professional wrestler, and the couple has also used their notoriety as a means of helping communities in need like those in West Virginia as well as to spread the gospel. Both have utilized social media to continue to collect supplies in their ongoing efforts to help flood victims.

“He just has a big heart for the folks of Appalachian and West Virginia,” said Brannen. “I don’t think he has wrestled since the flood, other than some free events for the church. It’s actually costing him money to make all these trips up there, but he’s doing it because he loves people and he loves the Lord.”

For more information on how to support James’ relief effort for flood victims, visit www.kingofkingsport.com for a list of needed items.

Laura J. Mondul is a freelance writer. Sent her ideas for Folks You Should Know and Kids Making a Difference to [email protected]