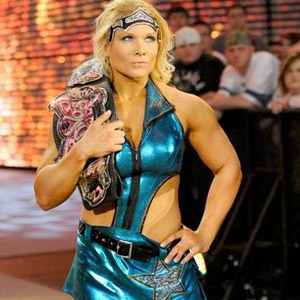 Daniel Pena of LordsofPain.net posted a report from Raj Giri of WrestlingINC.com that claims WWE Diva Elizabeth Carolan, a.k.a Beth Phoenix, will be finishing up with the company shortly. According to a source, Phoenix will be retiring in October.

Phoenix made her WWE debut in 2006 as an ally to Trish Stratus during her feud with Mickie James. She formed a funning pairing with Santino Morella called “Glamarella” after she and Santino won their respective championships at SummerSlam 2008.  She was then announced as WWE’s Diva of the Year.

Beth’s career was interrupted several times by injuries including a broken jaw and a torn ACL.

Phoenix was en route to displacing Maryse Ouellet as the longest reigning WWE Divas Champion in history earlier this year, however she lost the belt a week before she could break the record to Nikki Bella on the April 23rd episode of Raw.