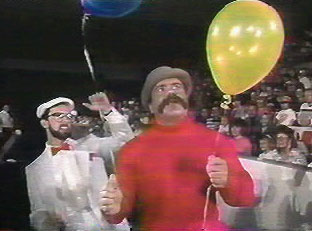 BIG BULLY BUSICK RESPONDS TO HARVEY WIPPLEMAN’S CRITICISM OF HIS RING WORK, REVEALS WHY HE LEFT THE WWF SO SUDDENLY, WHAT HE’S DOING TODAY, AND MORE By WorldWrestlingInsanity.com

So, you’re a ClubWWI.com member, huh? Well Bully for you – literally. That’s right. The one and only Nick “Big Bully” Busick comes to the Club for an extremely rare 30 minute interview with James Guttman that goes out to the bullies and the bullied alike.

Despite his brief run with the WWF in the early 90s, Big Bully Busick was one of the most memorable stars of the era. With his bowler cap, cigar, and red sweater, Busick embodied the old school bully character. Then – poof- one day he was gone. Now he comes to ClubWWI.com to discuss it all including the inspiration for the Bully character, the ironic difference of opinion Vince McMahon had on the Bully gimmick, the good advice Dick Slater gave him before wrestling Bruiser Brody, what the Iron Sheik has done for wrestling, and much more. For the full list of topics head to:

For all the latest information on ClubWWI guests and World Wrestling Insanity, join our Facebook fan page at:

In a business where a unique look can keep you in the minds of fans, few did it like Nick “Big Bully” Busick. His big mustache, red sweater, and bowler cap gave him a distinct character unlike any other in the business. It made him memorable to WWF fans, despite his brief run with the company. Looking like something straight from an 1890s photograph, Busick battered his opponents and bullied ringside fans. Then, after a fairly brief run that saw him work with stars like Sid Justice and Randy Savage, The Bully was gone. James asks Busick about his departure from the WWF. How did it come about? Big Bully answers.

I actually chose to leave and I actually left a little early. It was a combination of things. My kids were starting to grow up and I’d seen that the character wasn’t going anywhere. What I should have seen is that maybe I should have hung around and let WWF, at the time, do what they do best and progress because they may have done something where maybe I could have had a longer career out of it. But I didn’t and that was then, this is now”

Nick speaks about his short WWF run and the different way that Vince McMahon wanted to push his character (quite ironically). He speaks about his skills in the ring and more. On that subject, James Guttman brings up Nick’s former manager, Bruno “Harvey Wippleman” Lauer. Lauer appeared on ClubWWI.com for a shoot interview and spoke about Busick. Bruno said that Bully’s short stint with the company could be blamed on his lack of in-ring work. According to Lauer, he wasn’t skilled enough in the ring. Guttman asks Nick about that quote and his response is surprising.

“He pretty much hit the nail on the head. I take no offense to that because I was as good as the guy I worked with and that doesn’t make WWE material. I had great matches with Bruiser Brody and Abdullah the Butcher, but that was a completely different style of wrestling and I just didn’t adapt. So it’s not like Bruno was off in what he was saying. It was more of a matter of doing what you need to do to excel in New York.”

Busick speaks at length on ClubWWI.com about his time in WWF including the development of his new finisher The Stump Puller, who came up with it, why the move was always a shoot, powerlifters in wrestling, the only successful one, his stint in the GWF, the true inspiration for his Big Bully character and much more.

Nick sounds positive and that’s because he is. Today, he runs Big Bully Nutrition and has his own line of energy bars. With his powerlifting background, Busick knows about staying energetic and healthy when working out. He brings that knowledge to his products today.

“All the folks can visit there at BigBullyNutrition.com. We’re developing a Nitric Oxide bar on the therapeutic end of things. A lot of the boys have gone through some health issues, I started researching it, and we developed a very therapeutic bar for nitric oxide in the athletes.”