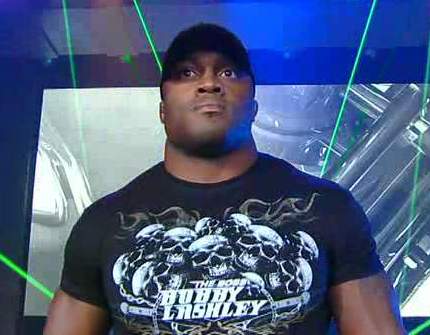 Bobby Lashley Previews Next Saturday’s Fight vs. Chad Griggs At “Strikeforce: Houston,” Why We May See Him vs. Dave Bautista In Strikeforce Sooner vs. Later, Who Could Make A “Dream Fight” With Brock Lesnar Happen (And It’s Not Dana White Or Scott Coker), How He Was “Torn” Between TNA And MMA, & A Sneak Preview Of The All-New “EA Sports MMA” (Being Released This Fall)

Bobby joined The Big Mosh, Jimmy Noonan, & “The Chairman of the Board” Todd Vincent for his debut on “Your Home of Wrestling Radio” (to preview next Saturday night’s “Strikeforce: Houston” event on Showtime), which is now available in Windows Streaming Media or via Monday Night Mayhem’s official Podcast on iTunes:

Why we may see Lashley vs. Dave Bautista in Strikeforce sooner vs. later (potentially as early as this fall): “I have a lot of respect for Dave, I like Dave. For me, what I’m trying to do in my career is trying to build and build up into bigger & better competition. As far as fighting Dave after this fight, I’ll do the fight right away. If he’s serious about doing this, then let’s do it. I think they might have a show in October or November sometime around there; if he wants to do it, let’s do it then. I’m not really willing to wait ’till next year or anytime after that; I’m moving forward in my career. After this fight, I’m looking at the Arlovski’s, the Fedor’s, the Brett Rogers’. That’s who I set my targets on, so when you talk about that Dave, that fight needs to be done right away, so I could keep moving forward.”

How he was “torn” between leaving TNA Wrestling & transitioning into a full-time MMA career with Strikeforce: “At first when I wanted to do it, I talked to all the higher-ups in TNA, and we tried to put together a plan where I could still wrestle, because when you’re a wrestler, it’s in your blood. So I wanted to wrestle, but I also wanted to fight, and I was torn between the two, and with the TNA schedule, I could do both. We had a couple of things that weren’t going together right, and like I said before, I’m trying to build up my competition, and I’m trying to get tougher & tougher opponents as I go, so at one point in time I had to make a decision on which one I was gonna do. I was either gonna be a full-time wrestler, or I was going to fight full-time. That window of fighting is only open for a short amount of time, because it requires so much dedication, training, sparring, & everything else, so I had to step away from TNA and just focus on training.”

Why it wouldn’t make sense for Bautista to fight anyone else but him for his first MMA fight & who he thinks has the potential to put together a “dream fight” between himself and Brock Lesnar: “I’m gonna say the fight that you want me to say first. I wanna have that fight with Batitsta. Nothing against him or anything, but I think for him to take any other fight would be a waste of his time. If he really wants to get into fighting, I think it wouldn’t make any sense for him to get in there and fight anyone else. I don’t think it would make any sense. As far as other fights, I would love to fight Fedor before he retires. I think he is pound for pound the best fighter in the world. I think another fight would be Brock. I’ve been asked that every single day by someone. ‘When are you gonna fight Brock? When you gonna take down Brock?’ I would love to see that fight with Brock happen. If Dana White won’t let it happen, or Scott Coker won’t let it happen, maybe Vince would let it happen…”

What professional wrestling & MMA fans can expect in his August 21st fight against Chad Griggs at “Strikeforce: Houston” on Showtime: “There are a lot of good fights on that card, and unless you’re real hardcore MMA fans, you may not know some of the guys, but if you go check them out, there are some great fighters. My fight: You’re gonna see a side of me that you saw in wrestler, but now you’re going to see it in the cage, and I’m going after this guy, and I’m going to suck the life out of this guy and pound him.”

More is contained in this exclusive interview with Lashley, including his candid thoughts/comments on which promotion he feels has grown the most since his respective departures from WWE & TNA, which of his former colleagues in professional wrestling he pays the most attention to/follows today, along with a sneak preview of the forthcoming “EA Sports MMA” video game (being released this fall). While gearing up for “Strikeforce: Houston” & Bobby’s return into the octagon, be sure to check Lashley’s network online: his official website (located at www.FightBobby.com), his official Facebook page (located at www.Facebook.com/FightBobby), his official Twitter page (located at www.Twitter.com/FightBobby), plus the official website of Bobby’s gym: the American Team Altitude (located at: www.ATTAltitude.com).