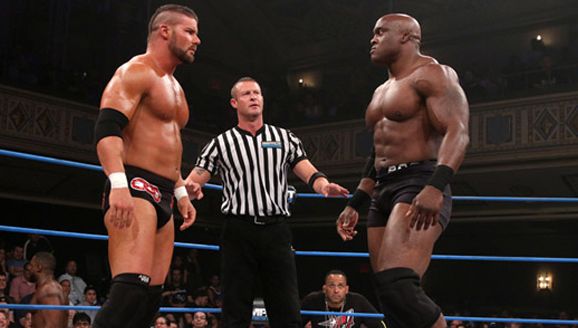 The last time that they met, Bobby Roode set the pace for his match with Lashley. He controlled the Destroyer in a way that no one had been able to do previously. He even became the first person to kick out of Lashley’s punishing finisher, the spear. However, late in the match, Roode appeared to suffer an injury to his knee. He seemed to slow down and, when he went for the Roode Bomb, he couldn’t support Lashley – or his own weight. It was there, Lashley smelled blood in the water and finished the fight – just as he did this past week at Bellator 130.

It’s been a few weeks, but are we sure that Roode’s knee has recovered? Yesterday, on the eve of Roode vs Lashley II, we caught up with The It Factor of Professional Wrestling to check on his health ahead of the big fight!

“You know, my body has been to war many times, as has every person who has made a career in this business. Walking around injured is part of life. Training injured, wrestling injured, we have to do it – it’s in our DNA. When I met Lashley last time, my knee was not ready for the challenge. Picking him up, I could feel my knee giving… Hell, I could feel it shooting through the rest of my body. I don’t know if my knee is 100%, but I do know it feels better today than it did that night in New York. I’m dedicated. I am here to win and be champion. My knee is going to be fine…”