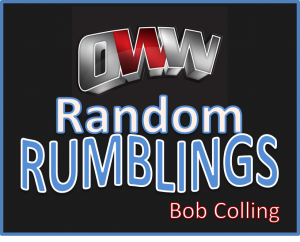 By the spring of 2000, World Championship Wrestling was in some serious danger and needed to create new stars. They seemingly stumbled upon on with Vampiro, who was getting some good babyface reaction. However, once Vince Russo and Eric Bischoff did a reboot for the company, Vampiro was turned heel and began a feud with the most popular WCW wrestler, Sting.

Vampiro and Sting were brothers in paint and formed an alliance in the early months of 2000. It would be assumed that Vampiro was in line to be a top babyface. That all changed on April 10th when Vampiro associated himself with Russo and Bischoff. Vampiro cost Sting a match against Diamond Dallas Page by hitting the Nail in the Coffin. 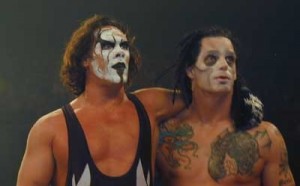 They would meet at Spring Stampede in a US Championship tournament match, which saw Sting win cleanly. Vampiro wouldn’t be fine with the loss. Instead, Vampiro would cost Sting a chance to win the WCW United States Championship. Vampiro pulled Sting under the ring and bloodied him. His heel turn was effectively taking place.

On the April 24th edition of Nitro, Sting challenged Vampiro to a first blood match. No one would bleed, but a red liquid came from the ceiling and landed on Sting. Vampiro would also hang Sting from a cable to embarrass him.

The following week on Nitro, Vampiro invited Sting to come to a graveyard. While there, Vampiro told Sting that he was the monster that Sting should have been. Vampiro would attack Sting by breaking a tombstone over his head and tossing Sting into a grave. But, since Sting is super natural, he would quickly recover. Literally, later on in the show, Sting would attack Vampiro in the ring with a baseball bat. That pretty much damaged Vampiro as a threat to Sting.

At Slamboree 2000, Sting would once again beat Vampiro clean. You would think that this would be the end of the angle. After all, Vampiro has lost two straight pay per view matches cleanly. If you were to think that, you’d be wrong. It must continue!

The following night on Nitro, Sting had a chance to win the WCW World Heavyweight Championship from Jeff Jarrett. Everything was looking good for the Stinger until Vampiro popped up from under the ring and pulled Sting under the ring again. Vampiro covered Sting in blood and Jarrett retained.

On the May 15th edition of Nitro, Vampiro lost to Sting in a House of Pain match. Sting won the match by shackling Vampiro to the cage. That would make it the third major loss for Vampiro against Sting in one month. Two days later on Thunder, Vampiro challenged Sting to a inferno match and the ropes were lite on fire while Sting was standing in the ring. The match would take place at the Great American Bash in June.

Vampiro earned a major win on May 22nd when he pinned Hulk Hogan after help from Billy Kidman. Afterward, Vampiro tried to lite Hogan on fire, but Sting made the save. That’s a major win for Vampiro, even though it wasn’t clean. Two days later on Thunder, Sting was interviewed by Mike Tenay. The set ended up being on fire and Vampiro continued to play mind games. Vampiro would try to lite Sting on fire on the May 29th edition of Nitro when he brought a gasoline truck to the show. However, security prevented that from happening. Later on in the show, Vampiro nearly put Sting’s head into a trash can on fire, but Kronik saved Sting.

Vampiro finally got some decent momentum over Sting on the June 7th edition of Thunder. Vampiro attacked Sting while Sting was competing against The Cat. Vampiro ended up pouring gasoline on the announcers table and tried to put Sting through a flaming table. Sting avoided it, and put the fire out. However, Vampiro was still able to put Sting through a non-burning table leading into the Great American Bash.

At Great American Bash on June 11th, Vampiro was able to beat Sting by lighting Sting on fire. Yeah, it was a stuntman as Sting was shoved off the big screen, but still, Vampiro got a win over Sting. The incident would cause Sting to be off television for several weeks.

Sting would return by mid-July, but was under a mask to protect his apparent burnt face. Sting would unmask on July 31st and was completely healthy. His feud with Vampiro seemed to be dying out and was having matches with Booker T among other main eventers. Sting had a title match against Booker T on the same Nitro but Vampiro and his associates the Great Muta and Demon got involved. They ended up putting Sting into Demon’s KISS coffin and lite the coffin on fire. They sure do love fire!

The singles feud between Sting and Vampiro is no longer really a top priority on WCW television. In fact, at New Blood Rising Sting simply squashed the Demon. The night after, Sting cost Vampiro and Great Muta their newly on WCW World Tag Team Championships. Sting continued to get the better of Vampiro and his friends when he won a four way match in just over two minutes.

In what should probably be considered the end of the feud, Sting would beat Vampiro once again in a singles match on the September 6th edition of Thunder. The match had “anything goes” stipulation, but that didn’t help Vampiro.

But, it wasn’t over. Sting had to beat Vampiro and the Great Muta in a triple threat match at Fall Brawl 2000. Thankfully, it was finally the end of the feud.

This feud could have been a great opportunity for WCW to make Vampiro a star for them. He was actually really over as a babyface, so it’s probably a questionable decision to have even turned him heel in the first place. The feud lost a lot of momentum when Vampiro wasn’t able to actually beat Sting in the ring. Sure, he had mind games going for him and whatnot, but he never once put Sting’s shoulders down on the mat for a three count. I find that rather interesting considering Vampiro pinned Hulk Hogan, a guy widely known for not wanting to put people over.

As you can see, Vampiro lost three matches to Sting within the first month of the reboot of WCW. The one match he actually won, wasn’t even by pin fall or submission but rather because he was able to lite Sting on fire. Sure, that makes Vampiro look deranged and spooky, but he was never near being a threat to Sting or any other main event guy.

Once Sting got back from the fire incident the feud was pretty much done. It had been going for three months and Vampiro hadn’t done anything to keep the momentum going. Even the attempt to bring in more guys (Demon/Muta) to keep the feud going was a failure because Sting would never lose to them, ever.

It could’ve been a great way to diminish Sting’s role and an even better way to build up Vampiro as a star for WCW. But, instead Sting was just fed three guys for five months and Vampiro was off television by the end of October. It was a wasted angle all around.

What are your thoughts on Vampiro vs. Sting feud? Feel free to share your comments!