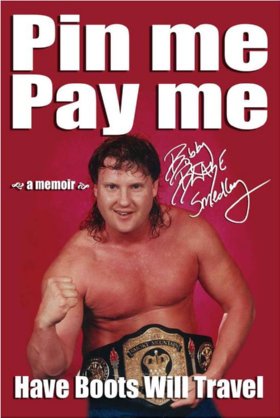 Editor’s note: This column originally appeared on http://slam.canoe.ca and was written by Greg Oliver.

Chances are you are only familiar with the name Bobby Blaze from his undercard days in WCW and his run in Jim Cornette‘s Smoky Mountain Wrestling. With his self-published book, though, Blaze is hopeful that ever more people get to know him.

After all, the midcard guys tell the best stories.

“I don’t know if we necessarily tell better stories, I just think we get to see, hear and witness a lot of better stories because we’re aware of what’s going on around us,” Blaze told SLAM! Wrestling, promoting his book, Pin Me, Pay Me, Have Boots Will Travel.

“We’re in the background, kind of like a fly on the wall, if you will. You get to see things from both ends of the spectrum — what it takes to get to the top, but you also know that you’re not maybe at that top level, but you also know that your talent is not necessarily curtain jerker,” he continued. “You see a lot of these guys behind the scenes and you get to hear a lot stories, you get to share a lot of stories, and you actually become real good acquaintances on the road with who you workout with, who you travel with.”

And quite honestly, Blaze got to know just about everybody during his career which ran from the early 1990s to the early 2000s.

Born Bobby Smedley in Ashland, Kentucky, he broke into the business in 1988, trained locally, but excelling later under the tutelage of “The Great Malenko” Boris Malenko in Florida.

He learned quickly that he had talent, but might not ever be a true headliner.

“I always learned from early on not to work for your ego, but always work for the match,” said Blaze. “I’ve never been one to say no to things. I’ve butted heads over little things, but never really said no. I’ve felt fortunate to work in circuits, in territories, where I worked main events, but I felt fortunate around the bigger companies just to have my talent appreciated.”

According to Blaze, Terry Taylor once called him “the most underused talent we have” in WCW. “I didn’t think that meant that they were going to put me in a main event or anything like that,” said Blaze. “It made me take pride in the fact that I can go out there and work with anyone, work any style, and in doing so, hopefully keep myself strong enough to keep going for the next town.”

Through the years, he found that friends and family wanted to hear his stories.

“People really are interested in what I’d done, where I’d been, what it’s like in Japan, or how was Australia,” he said.

Keeping a promise to himself when he was young, Blaze continued his education, and has graduated from some of America’s top universities: a Bachelor’s from Ohio University, and a Masters in Communications from Duquesne University. He considered working on a PhD, but financially it was not possible.

Instead, he set his sights on his own personal PhD.

“I thought my book would be my thesis” on the “School of Hard Knocks,” said Blaze.

Fans would always ask about people he knew or wrestled, or remind him of matches, which spurred him on with the book. Blaze found himself jotting down notes, even on napkins, or recording a story into his phone.

“Every day I’d write something in my notebook, or type something up,” he said. “It took me a little longer than I expected. When I started, my goal was to have it published by September 1st of 2013. I collected the stories and kept adding and editing, and I got it completed.”

Some of it was hard to re-visit.

Blaze’s mother and father died within 18 months of each other while he was writing the book. “That puts a damper on your writing, and you reflect on your own life,” he confessed. Writing about friends from the wrestling business who had passed away was tough too, from big names to lesser known names like the Dark Shadow and JT Lightning. “It was really, really hard writing about all the guys that had passed away — and the girls. Sherri Martel, I had become pretty close to her in Smokey Mountain Wrestling for the short time she was there.”

For a self-published effort, Pin Me, Pay Me, Have Boots Will Travel, is quite well done, cleanly edited and laid out.

“If my name was going to be on it, I wanted it to be as professional as possible,” he said, thanking his help with layout and editing, including a retired schoolteacher he never met who did the final edit.

“I wrote it all myself. That was the main thing, I wanted it all in my voice, just like if you and I were riding down the road to a show and talking,” said Blaze, adding modestly, “If someone buys a copy, that’s great. I think there’s people out there that want to hear stories of not necessarily being on top or making the top money.”

Greg Oliver is the Producer of SLAM! Wrestling. He can be emailed at [email protected], and you can follow him on Twitter @gregmep.

Check out the original article here: