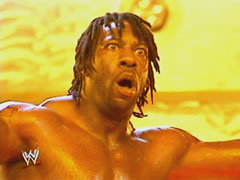 Booker T Huffman is busy with his own wrestling school and promotion, but he took the time to talk about leaving WWE, his new role in TNA and lots more in this monthâ€™s TNA conference call!

Steven Godfrey of SpikeTV/TNA opened the conference with a reminder that Booker T will make his iMPACT! wrestling debut this Thursday. Also, more matches for Sundayâ€™s Turning Point PPV will be announced on Thursdayâ€™s iMPACT!

Booker said it was time for him to make the jump from WWE to TNA, because life goes in stages, and this is his next stage. He went from Global Wrestling Federation in Texas to WCW to WWE, and now heâ€™s at TNA and back in Texas where he started, with his own wrestling school and PWA promotion. He felt the way things were going in WWE was not appropriate, and he was fortunate to be able to get out and go somewhere else.

Now that heâ€™s in TNA, he wants to test the new guys that have, especially AJ Styles, Frankie Kazarian and Robert Roode.

Booker said heâ€™s no longer thinking about retirement. He likes the more relaxed TNA schedule, and he feels he can stay on in the business longer since heâ€™s not on the road all the time. Now he feels like he can â€œroll till the wheels fall off.â€

Booker admitted that he and his brother Stevie are â€œat oddsâ€ right now, but they will patch it up.

Sharmell was used to being on the road since she was Miss Black America, and she worked for James Brown and some other musicians prior to starting in wrestling. They both know the pitfalls of the business and being on the road, and they try to avoid any problems. They work to keep their marriage strong.

His relationships with Jeff Jarrett and Vince Russo are very good, even though he hadnâ€™t spoken to either of them since WCW closed. Both men always treated him well, and they have mutual respect. Also, Russo was the one who gave him the shot to be WCW World Champion, and itâ€™s possible that without Russoâ€™s help, that might never have happened.

Booker denied that it was ever an issue for him that WWE did not choose his PWA as a developmental fed. That was only a rumor, and completely false.

As for the Signature Pharmacy allegations, he knows he never had anything to do with them. He never dealt with them at all, so when WWE did not step up for him, he knew it was time to leave there.

Booker has no idea how his name ever even came up in connection with Signature Pharmacy, but he believes in conspiracy theories and scapegoats. He doesnâ€™t know where the story came from, but he believes it would have to come from the top: maybe they needed someone with a big name to take the fall and give their cleanup program some credibility. and he was the one chosen. He does still have his legal team looking into it. He pointed out that he is 42 years old, and heâ€™s been in the business for 18 years; in all that time, he never had a bad thing said about him.

He never had a no compete clause with WWE, and was released free and clear, possibly due to WWE not wanting more publicity about the situation.

He hopes that PWA could become a developmental promotion for TNA. He looks forward to bringing some of the young people in TNA to PWA to work with them. He wants to help TNA improve any way he can.

Huffman emphasized that he is a businessman. He understands that TNA is a business, and they need to make sure every aspect of TNA is right, so itâ€™s the best product it can be. He wants to work on the production side, honing the talent. TNA needs a team effort, and he wants to make it clear that heâ€™s not in TNA to take anyone elseâ€™s spot.

He was aware that the internet fans knew he would be Stingâ€™s partner. After all, how many other wrestlers have held a World title in every promotion they have been in?

Booker doesnâ€™t want to try to continue the â€œKingâ€ character now. It was good for a change, but he never intended to do that for the rest of his life, and this is the time to drop it.

Heâ€™s working now on a documentary about himself, being back in Texas and with PWA.

He enjoys the TNA fans. Itâ€™s a new crowd, but it seems that they followed him, so heâ€™s still just performing for his fans, which he loves to do.

He is definitely going to do an autobiography.

PWA is a lot of work, but thatâ€™s what he expected it would be. It took two years working with his wrestling school to get to their first show, but he is enjoying it.

Booker said that the TNA locker room has accepted him and Sharmell very well. Lots of them admire and respect him, but he knows itâ€™s not all about him. Itâ€™s like the Temptations: everyone has to work together for the good of the group.

Regarding a Harlem Heat reunion, he said, â€œNever say never.â€

Booker said that for the last 2 months or so in WWE he was working behind the scenes and sitting in on production meetings, and he realized that he didnâ€™t want to be there in that company. He saw a lot of things that opened his eyes.

He does want to work behind the scenes for TNA, because things are different here. He wants to help TNA: itâ€™s not about him, itâ€™s all about TNA.