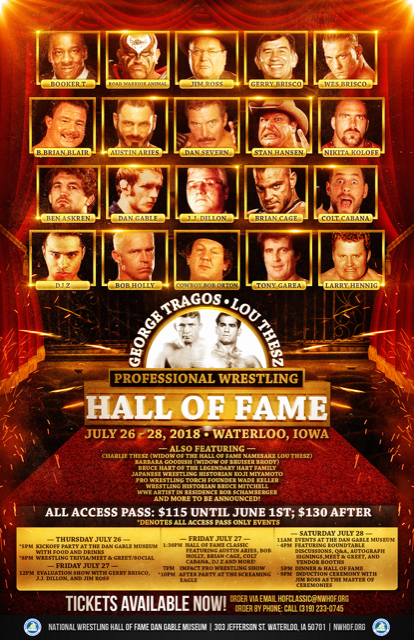 All-Access Passes allow attendees an opportunity to attend all events from Thursday through Saturday, including a ticket to the Hall of Fame Banquet, a ringside seat to the Impact Pro Wrestling show and preferred access at the autograph signing.

The Gable Museum is also offering an all-access pass and a three-night hotel stay package from July 26-29 at the newly remodeled Hotel Fourth (formerly Ramada Inn) for $355.

All-inclusive Hall of Fame packages and all-access passes must be pre-ordered by contacting the Dan Gable Museum at [email protected], calling (319) 233-0745 or clicking here.

Keep up to date with the latest Hall of Fame information by clicking here.

Distinguished guests confirmed to appear include:

Brian Blair: Cauliflower Alley Club president and half of the tag team “The Killer Bees”

Cowboy Bob Orton: Second-generation wrestling superstar, involved in the main event of the first ever Wrestlemania

More guests to be announced at a later date.

“This is another exceptional line up for the Hall of Fame weekend,” said Gerry Brisco, 2005 Hall of Fame inductee and president of the selection committee. “I was born and raised in Oklahoma, but I look forward to my time in Waterloo, Iowa, every July. This is a special weekend for all who attend.”

This one-day tournament takes place on Friday, July 27 at 2 p.m. The finals will take place during the evening Impact Pro Wrestling show.

There will also be a talent evaluation with current WWE scout Gerry Brisco, Jim Ross, and JJ Dillon. For more information on how to attend, e-mail Troy Peterson, owner of Impact Pro Wrestling, at [email protected].

2 p.m. – Hall of Fame Classic. Eight-person Tournament with the first round held at Five Sullivan Brothers Convention Center with finals held at IPW show in the evening. Tickets for the evaluation, Hall of Fame Classic, and IPW show can be purchased for $35 or general admission for $25.

10 p.m. – After Party for All-Access Pass Holders and distinguished guests.

Noon – Round table discussion and Q & A sessions.

Severn was a two-time wrestling All-American for Arizona State where he reached the finals of the NCAA championships in 1980. He had a stint with WWE from 1997-99 and is best known for his time with NWA where he was World Heavyweight champion on two occasions. Severn was the first high profile amateur wrestler to enter the UFC, winning the UFC Superfight Championship and became a Hall of Famer in that sport.

Hart was an accomplished high school and college wrestler before entering the professional ranks. He trained in the legendary Hart Dungeon under the tutelage of his father.  He gained fame competing in Stampede Wrestling and in New Japan Pro Wrestling before signing with the WWE. He was a multiple time tag team and Intercontinental Champion in the WWE.

Induction into the George Tragos/Lou Thesz Professional Wrestling Hall of Fame includes substantial impact on professional wrestling, general respect within the profession, and a strong amateur wrestling or athletic background.

Booker T is best known for his time in World Championship Wrestling (WCW), the World Wrestling Entertainment (WWE), and Total Nonstop Action Wrestling (TNA), holding 35 championships between those organizations. He is the most decorated wrestler in WCW history, having held 21 titles including a record six WCW World Television Championships

After his in ring career with the WWE ended, Booker T became heavily involved with charitable endeavors in Texas. This included, along with his wife Sharmell, founding the Booker T Fights for Kid Foundation. He also founded the wrestling promotion Reality of Wrestling and was WWE Raw and Smackdown commentator.

The Lou Thesz World Heavyweight Championship Award is given to an individual in wrestling who has taken the skills of the sport into the realm of public service. The award is co-sponsored by the National Wrestling Hall of Fame Dan Gable Museum and the Eblen Charities based out of Asheville, North Carolina.

Lou Thesz became world heavyweight wrestling champion for the first time in 1937 when, at the age of 20, he defeated Everett Marshall. Raised in St. Louis and trained by Ed “Strangler” Lewis and George Tragos, Thesz won the title a total of six times — the last occurring in 1963 when he defeated Buddy Rogers.

Thesz is still considered one of the best professional wrestlers ever — when true talent and toughness were what counted most in the ring.

Bruiser Brody was considered one of the most feared and respected wrestlers in history. He began his career in Texas, and soon became in demand across the globe. Brody competed in virtually every wrestling promotion in the United States and Japan, winning fans over with his wild, brawling style. Brody was famous in Japan for his tag team with Stan Hansen, and battled Abdullah the Butcher around the world. Brody was known as a shrewd businessman, and worked behind the scenes in WCCW as a booker.

The Frank Gotch Award is given to a wrestler who, through their athleticism and toughness in the ring, brought a higher level of respect to professional wrestling from both inside and outside the business.

A native of Humboldt, Iowa, Frank Gotch — a professional wrestler — became one of the best-known athletes in the world during the early 1900s. He won the American title in 1905 from Tom Jenkins, and then took the world title in 1908 from George Hackenschmidt. The 1911 rematch with Hackenschmidt (known as the Russian Lion) drew a crowd of over 30,000 people to Comiskey Park in Chicago. Gotch triumphed again, winning in two consecutive falls.

Ben Askren was a two-time NCAA wrestling champion for Missouri (2006-07) and a four-time NCAA championship finalist (2004-07). Askren made the 2008 Beijing Olympic Games in freestyle wrestling at 163 pounds. He compiled an 18-0 Mixed Martial Arts record, winning welterweight titles for ONE Fighting Championship and Bellator. Askren is a currently an owner and coach at Askren Wrestling Academy (AWA) in Hartland, Wisconsin. The academy is dedicated to helping young wrestlers achieve their goals.

The George Tragos Award is given to an exceptionally competitive wrestler who has adapted his wrestling skills and competitive nature to excel in Mixed Martial Arts.

George Tragos, namesake of the award and the hall of fame, was one of the most feared submission wrestlers during the 1920s and 1930s. He wrestled and threw discus for the Greek Olympic team in 1920 and 1924. Tragos was also an AAU freestyle champion in 1919 at 158 pounds for the Gary, Indiana, YMCA. He worked with Don Faurot to revitalize the University of Missouri wrestling program in 1944 as well.

George Tragos’s most famous pupil was Lou Thesz. Lou’s knowledge of hooks was the single most important rung in Lou’s ladder to the top and his years of holding the World Heavyweight Championship (13 years in total). Lou had the body, work ethic and passion, but George gave him the tools that let everyone (wrestlers and promoters) know he was in control of his future and that of the title when he held it. The fans knew the difference, too, and that is why the promoters kept coming back to Lou. The fans knew Lou was a true wrestler. George Tragos gave Lou that edge.