Breakfast with the Million Dollar Man 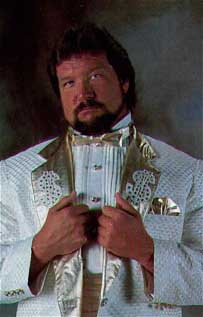 Monday night on Raw, one of my early students of professional wrestling, “The Million Dollar Man” Ted Dibiase was announced as the first inductee to the WrestleMania 26 Hall of Fame.

After the loss of his father, Iron Mike Dibiase of a heart attack in the ring in Lubbock, Texas, Ted Dibiase said to me, “If this business was good enough for my mom and dad, It is good enough for me. This is what I want to do.” (Ted’s mother was one of the most beautiful Ladies in the wrestling business, Helen Hilde. Iron Mike Dibiase, Amateur wrestler from University of Nebraska, was one of the toughest men in the business)

Now as an inductee of the WWE Hall of Fame, The Million Dollar Man, Ted Dibiase earns recognition as one of professional wrestling’s all time great wrestlers and box office attractions.

Watching the special on Ted Dibiase brought back memories of Amarillo, Texas and the Amarillo Territory.

A wrestling enemy who was a friend of mine was Ted’s Father, Iron Mike Dibiase. I had watched my father Dory Funk Sr. wrestle Iron Mike in a famous three hour and ten minute match in Amarillo, Texas. Iron Mike was the man I worked with in the finals of a tournament in Amarillo to earn the right to wrestle Lou Thesz early in my career. At the time Iron Mike was my best friend, even though publicly we were never seen together.

It was 8:00 am, early for wrestlers who worked late and usually were in bed at this time. Breakfast was scrambled eggs, sausage, grits, biscuits, gravy and hot coffee. The guests in my home were Iron Mike Dibiase, his beautiful wife and former lady wrestler, Helen (Hilde) Dibiase, and their young children, Teddy and little John Dibiase. The conversation was warm and friendly and we were enjoying the comradeship.

We were, “breaking kay-fabe,” and enjoying ourselves immensely, especially young Teddy who was only 11 years old at the time and his little brother John. What happened next was a real nightmare!

For the “Rest of the story visit http://www.dory-funk.com.

Coach of the Funking Conservatory Wrestling School and trainer of wrestling superstars.