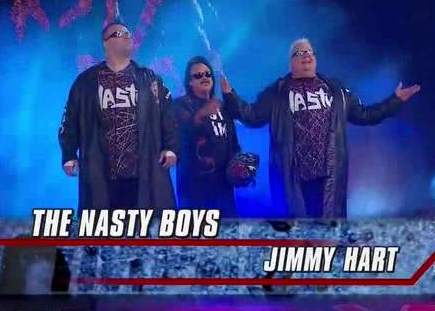 Brian Knobbs Discusses The Truth Behind The Nasty Boys’ Release From TNA Wrestling, The Honky Tonk Man Being One Of The First Outlets To Break The Story, The Reported Incident At The Hard Rock Cafe, If His Relatiionship With Hulk Hogan/Eric Bischoff/Dixie Carter Changed Along The Way, Being Brought Into The Company By Hogan (And If There Was Heat In The Locker Room For That), The Nasty Boys Feud With Team 3-D (And Where It Was Slated To Go/End Up), If The WWE Has Contacted Him & Saggs Since The Story Broke, & The Chances At The WWE Hall Of Fame

Courtesy: www.MondayNightMayhem.com
Former WWE/WCW World Tag Team Champion & one-half of The Nasty Boys, Brian Knobbs, was one of the special guest on this week’s live edition (04/12/10) of Monday Night Mayhem (presented by ReelWrestling.com), hosted by The Big Mosh, Blade, & “The Chairman Of The Board” Todd Vincent. You can feel The Mayhem live every Monday night (at 7PM ET/6PM CT), exclusively on The Monday Night Mayhem Radio Network (www.MondayNightMayhem.com).

Brian joined The Big Mosh, Blade, & “The Chairman Of The Board” Todd Vincent for his return to “Your Home Of Wrestling Radio” (for his first interview/public comments since the reported release of The Nasty Boys by TNA), which is now available in Windows Streaming Media or via Monday Night Mayhem’s official Podcast on ITunes:

Interview highlights courtesy of The Mayhem’s official correspondent, Paterson From New Jersey:
The truth behind The Nasty Boys reportedly being released from TNA Wrestling: “Right now, no one has contacted me or Saggs. No one from TNA. I have talked to Hogan, and he has not verified whether we are not. Supposedly, we are still with TNA. Nobody hasn’t told us anything yet. There’s a lot of stuff going on there as you see. They went to Monday nights, they’re trying to get ratings up, they’re throwing a lot of stuff together right now, and right now we are in ‘the limbo factor.’ Nobody has told us that we are there or not there yet. I’m not gonna speculate like everyone else is on the Internet, and I’m not gonna throw wild stories out there like ‘Brian Knobbs acted crazy to one of the executives at Spike, took his pants down, & ran naked across the pool at The Hard Rock.’ C’mon, we know better than that.”

The truth behind the alleged incident at The Hard Rock Cafe: “Let me put this into perspective. Something did happen two or three weeks ago, but I was there with Orlando Jordan’s significant other & Ric Flair. Now you don’t think that if I went crazy & we haven’t been there in over a month, even if it was in February or January, somebody would have said or put on the internet because they are a bunch of fans in front of everyone? There are no private parties like they put on the internet. There was nothing like that. Every time we were through with a match, we went out for a couple of beers, and we were professional as hell. We were at the Hard Rock Cafe, and we were with everybody. So you don’t think if we were acting like people are saying, it would have been on the internet the next day. Not when you hear The Nasty Boys are not there now, and this might have happened; that’s all speculation, and it’s a bunch of BS.”

Knobbs’ relationship with Hogan, Eric Bischoff, & Dixie Carter when The Nasty Boys came into TNA & if it changed throughout their run with the company: “Let’s face it. Me & Hulk are good buds, and we are always going to be good buds, but Hulk brought us in. Hulk asked me & Saggs, we did not ask to come to TNA. Hulk asked us to come help him out, and that’s what we were doing. We were coming to help him out. We never went against Team 3-D, and it was like a legendary match-up made in heaven, since they’re crazy, and we’re crazy. So we loved it, and said, ‘Sure we’ll come help.’ Now Dixie Carter has always been nice to us, always a real sweetheart. She’s out there doing a lot of things, and she always talked to us real nice. Eric Bischoff on the other hand…you never know. It’s 50-50 with him. He’s now running a lot of stuff again, so who knows…Between Hulk & Dixie Carter, there is no ill will, and I wouldn’t think there would be no ill will between us & Eric, but you never know.”

Was there any heat from the TNA locker room towards either Knobbs or Saggs: “Truthfully if there was, they never really showed it to me & Saggs. Everybody was great to us, and everybody showed us a lot of respect, and we do have a lot of friends down there too. Sting‘s a very good friend from many years, and Kurt Angle‘s a good friend. We had wars with Cactus Jack (Mick Foley) in WCW, so we have a lot of buddies down there also, so when came in, we fit right in. We never got into with anybody. We joked around…had fun. There was no ribs pulled or nothing like that. The old Nasty Boys didn’t come out…that’s for sure. As mind-bogging as it is to you guys, it’s pretty mind-boggling to us.”

Whether The Nasty Boys were contacted by the WWE prior to going to TNA or have been since their reported release: “We got contacted back in January. They called me and left a message to call them back, and they wanted to see what our status was in TNA. It was short & sweet, and they left a number, but I never did call it. I told Hogan they called us, and he said we should check it out, but I said right now, we’re down here, and our loyalty is our loyalty.”

More is contained in this exclusive interview with one half of The Nasty Boys, including Brian’s candid comments about The Honky Tonk Man being one of the first outlets to break the news about The Nasty Boys reported release from TNA, debuting for the company as the “Hogan/Bischoff Era” was just beginning (and how things changed after their splash into the promotion), along with his thoughts about The Nasty Boys’ chances at the WWE Hall Of Fame/the possibilities of getting inducted. For all of the details on the Nastyville School of Pro Wrestling, Log onto www.NastyKnobbs.com, e-mail [email protected], or call (877) NASTY-01 (877.627.8901).

“Your Home Of Wrestling Radio” is officially presented by http://www.ReelWrestling.com, where your favorite Superstars are just one click away! The award-winning Monday Night Mayhem (voted on by you, the fans as the “Show Of The Year” in the 2009 & 2010 Wrestling Radio Awards) is also sponsored by: Sizzlin’ Sauces (the official hot sauce of The Mayhem: http://www.SizzlinSauces.com), Ringside Digest (the official news source of The Mayhem: http://www.RingsideDigest.com), Ticket Relief (the official online traffic school of The Mayhem; register today for your simple & hassle-free defensive driving course and save 20% by using the promo code MAYHEM: http://www.TicketRelief.com), B. Brown Video (where you can relive the moments & memories of professional wrestling’s rare & vintage moments: http://www.BBrownVideo.com), & Kayfabe Commentaries (the home of the all-new “YouShoot: Jim Cornette” DVD: http://www.KayfabeCommentaries.com).