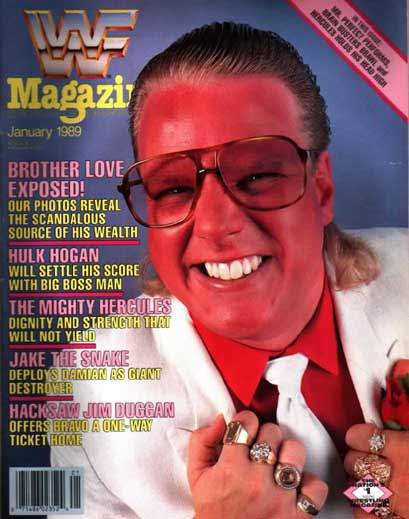 Bruce Prichard Discusses His WWE Release, Why He Is Not Bitter About Leaving World Wrestling Entertainment, Tension Amongst The WWE Creative Team During His Time With The Company, Having Storyline Ideas Rejected By Vince McMahon/The Importance Of Being Creative On The Fly, The Beginnings Of The “Brother Love” Character (And His Favorite Memories On “The Brother Love Show”), Debuting The Undertaker To A Worldwide Audience At The 1990 Survivor Series (And If He Feels The Forthcoming Collision Between The Brothers Of Destruction Will Spell The Swan Song For “The Dead Man”), Why You Should “Never Say Never” About The Thought Of Him Coming Into TNA’s Creative Team, His Reasons As To Why EV2.0 Is A “Very Poor Business Choice” On The Part Of TNA, Why Seeing Tommy Dreamer Cry Made Him Want To Cry, The Mystery & “Gaga” Behind The Hulk Hogan/Jeff Jarrett vs. Sting/Kevin Nash Storyline, & Why Steve Austin Deserves Credit For “Stone Cold” (And Not Vince Russo)

Former WWE Vice President of Talent Relations/member of the WWE Creative Team/WWE producer & manager, and the man behind the success of the Brother Love character, Bruce Prichard, was one the special guests on this week’s live edition (08/23/10) of the award-winning Monday Night Mayhem (presented by Good Health Natural Foods). You can feel The Mayhem live every Monday night (at 7PM ET/6PM CT), exclusively on The Monday Night Mayhem Radio Network (www.MondayNightMayhem.com).

Bruce joined The Big Mosh, Jimmy Noonan, & “The Chairman of the Board” Todd Vincent for his first post-WWE interview exclusively on “Your Home of Wrestling Radio” (to promote his all-new podcast on www.WebTalkRadio.net, “Something to Wrestle With”), which is now available in Windows Streaming Media or via Monday Night Mayhem’s official Podcast on iTunes:

The importance of having to create on the fly in the WWE & how it was essential to be in “go-time” mode, despite the frustration behind having storyline ideas being rejected by Vince McMahon: “You haven’t done enough hours of radio in your lifetime. You haven’t lived enough hours of radio in your lifetime to be able to contain the number of ideas that had been laid out in detail to only be squashed because someone wasn’t ‘feeling it’ or someone might say ‘Someone tripped in a match last night, can’t do it, and they’re horrible, get rid of them.’ And you’re sitting there like ‘What just happened?’ There are so many, but at the end of the day, it was what we do. To me, at the same time, as aggravating as it was, it was also the most fun, because that’s when it was ‘go-time.’ You had to create on the go.”

Tensions amongst the WWE Creative Team while Bruce was with the company & why he feels Steve Austin deserves the credit for the success of “Stone Cold” Steve Austin” (and not Vince Russo): “There were times when you just had to buckle up & go; there was always tension. Once it got past that initial creative discussions, then you had to go sell it to talent, and then you had to get talent to go out & deliver your vision. I listen to guys all the time, and one of the things I always get amazed by is when different people & guys who have written or booked in this business take credit for something the talent does. There’s a guy over in TNA (Vince Russo) who has taken credit over the years for the creation of ‘Stone Cold’ Steve Austin, The Rock, & people like that. At the end of the day, the guy who deserves credit for ‘Stone Cold’ Steve Austin is Steve Austin. He went out & delivered. Steve went out, and he was ‘Stone Cold’ Steve Austin 24/7. When Russo used to write up all these scripts, Steve would look at it, crumple it up, & throw it in the trash. Steve would go out, and he had a rapport with Vince McMahon, and he used to come to me and say ‘I wanna say this.’ I said ‘Hey man, that’s life, so if you wanna take the ass-chewing when you get back, do what you think is right.’ After a while, Steve gambled, and went out, and he did what he thought was right. He had an ear, and he knew what was working, and what they buying & weren’t buying, and at the end of the day, it may not have been the ideal creative situation that was created, but Steve made it his own, and made it bigger than anything that’s ever been done in the business. Without talent, you can have the greatest creative in the world…if they can’t deliver, it doesn’t matter.”

His favorite moments performing as Brother Love: “I have to say head & shoulders from the initial era of ‘The Brother Love show’ was from Saturday Night’s Main Event, with Hulk Hogan, Slick, & The Big Boss Man, where Hogan handcuffed me & clotheslined me over the top rope, and it was first time anyone had ever gotten to me…and it was Hogan. So it was the first time anyone ever put their hands on me, and that was a great moment. My favorite one for sentimental reasons was finally doing something with The Undertaker in Philadelphia, when Paul Heyman put me in a box, and I came out as a gift for The Undertaker. That was my personal favorite.”

Why you should “never say never” about the thought of him coming into TNA’s Creative Team: “Never say never in life and especially in this business. The things that would have to take place to come in & help: they need a lot of help, they need to make some drastic changes. I don’t know if they would be willing to make those changes or not, but if they were willing to make those changes, then it may be a good fit. It has to be a good fit for them & for me. I’m willing to listen to anybody & everybody these days…life’s too short. To say I would/yes, I can’t say that. To say I would say no, can’t say that either. I would have to listen to what they had in mind and go from there. But at this point, I think the show’s a mess, and I’m not saying anything here that I wouldn’t say to them. You need help, you need some direction, some kind of stability, or some kind of direction to get the rutter in the water and moving forward. Right now, they are bailing; they are just trying to get water out of the boat.”

Why he believes EV2.0 is “a very poor business choice” on the part of TNA, why seeing Tommy Dreamer cry made him want to cry, and the mystery & “gaga” behind the Hulk Hogan/Jeff Jarrett vs. Sting/Kevin Nash storyline: “I look at TNA, and I see what they’re doing with the rehash of the ECW guys. Let’s look at facts. ECW went out of business because it didn’t have enough fans to support it and to keep it a viable company in business making money. Fact: Every one of those guys in the ring with the exception of Tommy Dreamer was calling the WWE begging for a job to get out of ECW because they hated the conditions, they hated working there, they hated everything about it, and wanted to get out, and to hear them talking that ‘It was the greatest thing’ and ‘We wanted just one more night.’ Seeing Tommy Dreamer cry makes me want to cry. You have a company that went out of business; an attempt of a resurrection through WWE (they tried to continue it). It was something you couldn’t continue in any other atmosphere other than that Bingo Hall in Philadelphia…that’s where the magic was made, and frankly, the magic was made in how Paul Heyman packaged what they did. And for TNA to take that and say ‘Hey this is going to revive us.’ Wait, didn’t those guys put another company out of business? Didn’t it fail when they tried to do it with the big company that had a lot of money? I just think it’s a very poor business choice on their part. You have Kevin Nash, Hulk Hogan, Jeff Jarrett, & Sting involved in something. There’s too much mystery, there’s too much gaga. You got Ric Flair with eight guys holding up four fingers, I don’t get it. I really don’t the TNA program at all. It’s really hard to follow and makes you go huh?”

His thoughts & opinions on the current state of the wrestling business, if he feels that the business is “dead,” & why he’s not a big fan of the PG WWE: “It’s kinda hard to say. Someone asked me the other day if I thought the business was dead and if UFC had basically taken its place. I don’t think you could ever ‘kill’ the business. I think the business has to evolve & the business has to change with the times, and I think it’s doing that. Sometimes I’m not in favor of doing some of the changes. I’m not a big fan of PG/PG-13 with the WWE, and I watched the other night when they had the Divas come out in one-piece bathing suits. I mean c’mon, it could be PG/PG-13, and they could still wear bikinis, and be hot, and show they’re bodies off. Sometimes they take a certain thing to the extreme that doesn’t necessarily have to be that extreme. The business is always going to change & grow.”

More is contained in this exclusive interview with the former WWE Vice President of Talent Relations, including his candid thoughts/comments on the beginnings of the “Brother Love” character, debuting The Undertaker to a global audience at the 1990 Survivor Series, if he feels the upcoming collision between The Brothers of Destruction could be the swan song for “The Dead Man,” which talents during his run in World Wrestling Entertainment took ideas from the WWE Creative Team and made them successful, plus so much more in the first post-WWE comments from Bruce Prichard. Follow Bruce right now on his official Twitter account (located at www.Twitter.com/BrucePrichard). We strongly encourage all members of The Mayhem Nation around the world to log on www.WebTalkRadio.net and listen to Bruce’s weekly podcast, “Something to Wrestle With,” the only place you will hear the battle stories & the behind the scenes realities from years past & the backroom stories of today!