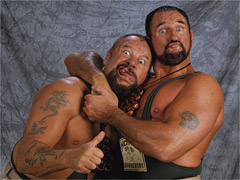 Whoa! Yeah! Wave your arms. Eat your sardines. Lick your mailman. It’s the shoot interview that truly embodies World Wrestling Insanity as ClubWWI.com welcomes the one and only Bushwhacker Luke to the site for a 47 minute shoot interview with a New Zealand flavor.

For over four decades, Luke Williams has been a staple in the wrestling industry. Alongside his cousin Butch Miller, Luke terrorized fans in the UWF, Mid-South, WWC, NWA, and more. The Sheepherders caused violence and bloodshed everywhere they went. Then, when the day came to join the WWF, the duo became fan favorites, dubbed themselves the Bushwhackers, and the rest is bloody history.

Now, in a 47 minute uncut ClubWWI.com shoot, Luke speaks to James Guttman about all of that. From his younger days as a member of Beauty and Beast to the early moments of New Zealand wrestling to his recent appearances for ROH and TNA, Williams holds nothing back. Among the huge list of topics you can hear him discuss on ClubWWI are: Transitioning From Sheepherder to Bushwhacker, Why He and Butch Never Turned Heel in the WWF, The Bloody Feud With The Fabulous Ones, Breaking In Rick Martel, His Royal Rumble Record, Working With Mean Gene, The Beverly Brothers, His Appearances For Ring of Honor, His TNA Nephew Eric Young, Lack of Psychology in Today’s Wrestling, Early Days of New Zealand Wrestling, Whether or Not James Ate His Sardines, and More.

One topic that JG brings up is the Sheepherders in WWF. Guttman says that anyone who saw Luke and Butch as good guys, can never picture them as bad. Anyone who saw them as bad guys, can never picture them good. The most amazing thing is that they played such different characters, while barely altering their gimmicks. The one question? Did the topic of a heel turn ever come up in the World Wrestling Federation? Was turning the Bushwhackers evil something that Luke would have even wanted?

“I would have loved to have done it, but I guess they didn’t want us to do it. I was all for that. I was all for touring and doing that sort of thing. But they kept us there I guess because we were there for the kids and the fans. If we turned nasty and that, I guess the people loved us so much, they would have been disgusted. You know, sometimes you can do it right, but that Bushwhacker gimmick was so strong with the kids and everything that parents might have gotten disgusted if we turned nasty and that and we may have lost an audience.”

James laughs and says it would have been great to see Luke and Butch walk down the aisle, go to lick a kid’s face…and then bite his head off. Luke laughs and the two discuss the changing face of wrestling and how a bad Bushwhacker duo might have been feasible today.