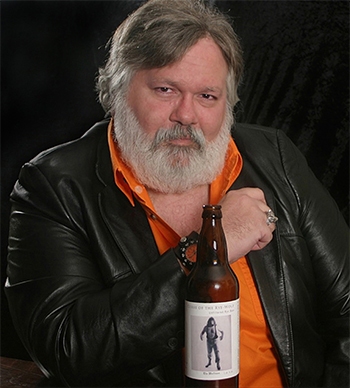 Jason Sanderson – The Most Interesting (Wolfman) in New Hampshire

This wrestler-turned-novelist might be the only bishop with a beer named after him!

Some stereotypes stick harder than others — and professional wrestlers are forever stuck with the brawn-over-brains label. When he was the underdog candidate in the Minnesota gubernatorial election, former WWF star Jesse “The Body” Ventura posed as the Auguste Rodin sculpture “The Thinker” in a campaign ad while the narrator outlined his positions on education reform. Jesse “The Body” had become “Jesse The Mind.”

At the local level, New Hampshire’s Jason “The Wolfman” Sanderson has undergone a similar transformation. Listed at 6-foot-1 and 300 pounds during his wrestling days, the bearded barnstormer still sports an intimidating façade. But almost a decade after his last VFW hall and high school gymnasium battles with Lobsterman, the Mummy, Captain USA and the Blood Sucking Alien, these days the retired grappler struggles mostly with writer’s block.

Based in a historic farmhouse in Madison, the 47-year-old Sanderson is in the midst of a seven-part novel series built around the premise that the Soviet Union won the Cold War and occupied the United States during the 1970s. His protagonists are a bunch of shaggy musicians called the Roadhouse Sons, a classic rock cover band that covertly operates as a spy ring for the American resistance.

“I grew up near the old East Haven Radar Base in Vermont, which was one of the US Air Force’s early warning stations against the Russians. It really brought the Cold War home to me,” he recalls. “As a kid, I felt that the war could really happen here. I remember on TV, there’d always be that siren — ‘This is a test. This is only a test of the Emergency Broadcasting System.’ My dad told me that was for when the Russians were going to attack us.”

The tagline for Sanderson’s self-published books: “What if the Cold War had gone hot and your fate rested in the hands of a ’70s cover band?”

The stories are being concurrently released in graphic novel form, with many of the plots ripped straight out of his wrestling road trip memories. Sweaty leotards have been replaced with leather pants and tight shirts, unbuttoned, of course, to show off the chest hair and gold chains. Sanderson recently set up a Roadhouse Sons booth at New York Comic Con to plug the series.

As a promotional tool for the graphic novels (and for personal amusement), Sanderson has brought the Roadhouse Sons band to life. The frontman is his longtime buddy Tony Heyes, a local musician who inspired the spy guitarist Cameron Walsh in the comics, and who used to play in the Boston-area cover bands Studebaker Hawk and Not Dead Yet.

“We’re a tribute band to a cover band that never existed,” laughs Heyes, who is also from Madison. “We’re playing book release parties, private parties and promotional events, but I don’t see us ever going on tour.”

“Jason and I both tried to make it big — him in wrestling and me in music — but neither of us achieved the level of fame we were chasing. There’s nothing like the feeling of being on stage. You never forget the adrenaline rush you get from the fans and I think we both miss it,” he adds. “This is something we don’t need to get paid for. It’s something we need to do.”

Unlike their cartoon alter egos, who scramble for rationed gas to get to their next gig, the Roadhouse Sons have the luxury of not ever worrying about ticket sales or song royalties. Sanderson is the sole angel investor, a role he can repeatedly play with his pet projects because he and his ex-wife won a $66 million multi-state Powerball jackpot back in 1997.

Another winner was the All-Star Wrestling Association (AWA), which gave birth to his Wolfman character in 1996 at the Hudson VFW Post. Sanderson subsidized the business for at least a decade, keeping many of his wrestling buddies’ careers alive despite the league’s poor commercial viability.

For privacy reasons, Sanderson now declines to discuss his lottery winnings. However, previous press reports indicate that he’s frugal and likely can still fund almost any dream he desires. In 1999, he told People magazine that he “did do something wild that first night. I bought Chef Boyardee SpaghettiOs instead of the generic spaghetti.” In the same story, buddy Jeff “Lobsterman” Costa insisted that hitting the jackpot hadn’t changed Sanderson. “If he spends 50 bucks a day, that’s good,” Costa said.

The Toronto Sun dubbed him the “World’s Richest Grappler” in a feature story, ironically noting he’s “a guy who can live off caviar, but still chooses to invest in a small pack of nuts.”

When you win Powerball, let’s just say that networking is no longer necessary and that you don’t need to worry about updating your LinkedIn profile. Although the opportunity exists to relax on a tropical island sipping margaritas for the rest of his life, the former industrial screen printer has chosen to remain as busy as possible.

Now a single dad of 13- and 15-year-old boys, he tries to cram in his writing time while the kids are in school. When he’s not imagining new ways the Roadhouse Sons can outwit the Soviet empire, he’s toiling on a nonfiction history book about his tiny hometown of Burke in Vermont’s Northeast Kingdom.

“I’ve been interviewing people and collecting pictures, postcards and artifacts for 30 years,” he says. “I can stand in the East Burke cemetery and count back seven generations. So many people want to read this and some are dying before I can deliver. I just can’t delay this any more.”

Since leaving Burke, the Wolfman has logged far more frequent flier miles than the average monster.

As a clever cross-promotional gimmick for AWA Wrestling, Sanderson served as campaign manager for Lobsterman’s 2000 presidential bid against Al Gore and George W. Bush. The friends were the founders of the Crustacean Party and Costa’s giant lobster claws were a magnet to MTV, Comedy Central, the Discovery Channel and other national media outlets who quizzed him on the death penalty, taxes, foreign policy and gun control.

He later became an ordained bishop and then was elevated to archbishop in the Liberal Catholic Church International, a Christian denomination with parishes in Africa, Australia, Europe and North America. Since 2004 Sanderson has led multiple missions to Africa, helping set up schools and orphanages in Cameroon, Kenya, Tanzania and the Democratic Republic of the Congo. He also officiated at Lobsterman’s daughter’s wedding and has conducted several marriage ceremonies at pro wrestling reunions and conventions.

Over the past decade, Sanderson has been actively involved with the rescue of hundreds of abandoned horses and dogs through the Forever Home Foundation. He once drove from Indianapolis to New Hampshire to save a retired police dog that was in jeopardy of being put to sleep.

“His name was Eric and he was a great dog, but he had a disease that required expensive treatments that their police department couldn’t afford,” Sanderson recalls. “Riding home with him was fun, actually. I would stop every couple of hours for him to get out and run and do his business.”

Just helping out another kindred spirit of the Wolfman.

Legend of the Wolf

In his wrestling days, Sanderson never really had a Wolfman costume. His bushy, out-of-control facial hair, combined with a scowl, was enough to pull off the nickname. Given his aversion to razors, it’s no wonder that friends still call him Wolfman, Wolf or Wolfie — and he’s recently been immortalized with his own brand of New Hampshire craft beer.

Effingham-based Prodigal Brewery this fall was selling its “Curse of the Rye-Wolf” ale with Sanderson’s original black-and-white publicity shot on the label. According to owner Paul Davis, the unfiltered murky brew “tastes just like rye bread without the caraway seeds.”

“We named it based on the lore of what happens during the harvest season,” he explains. “As nightfall comes earlier and earlier and you work later and later, you start to see things in the dark.”

Davis says honoring Wolfman Sanderson with the label began as a thank-you for Bishop Sanderson blessing his brewery when it opened last August. But ultimately, the vintage wrestling photo has proven to be a marketing magnet to curious customers at farmers markets.

“We want to celebrate local characters and Jason is quite the character,” adds Davis. “We’re hoping that the Wolfman will eventually come out and autograph some of the labels for our customers.”

Bradford fitness trainer Dan Pettiglio, aka the former “Captain USA,” predicts that his friend will have no shortage of story material to mine from their wrestling days. Pettiglio, who was charged with drumming up pro-American chants from the crowd during his battles with various foreign enemies, thinks Wolfman should start at the Tijuana prison they once visited during a Mexican road trip.

“Our audience consisted of people convicted of who knows what,” says Pettiglio. “I can assure you that Captain USA was not very well liked down there. I thought I was going to get stabbed.”

“We’re all part of one crazy brotherhood,” he says. “Wrestling is just another form of storytelling. There’s a protagonist and an antagonist. There’s always a clear beginning, middle and end.”

The Wolfman readily agrees, describing his former profession as the “Blue Collar Ballet.”

“I love the simplicity of seeing the good guys battle the bad guys,” he says. “I’m feeling nostalgic about the time when Americans knew who their enemy was. Now things are so clouded. I think we all miss that clarity.”

Read the rest of the article here (including some great photos, etc.):