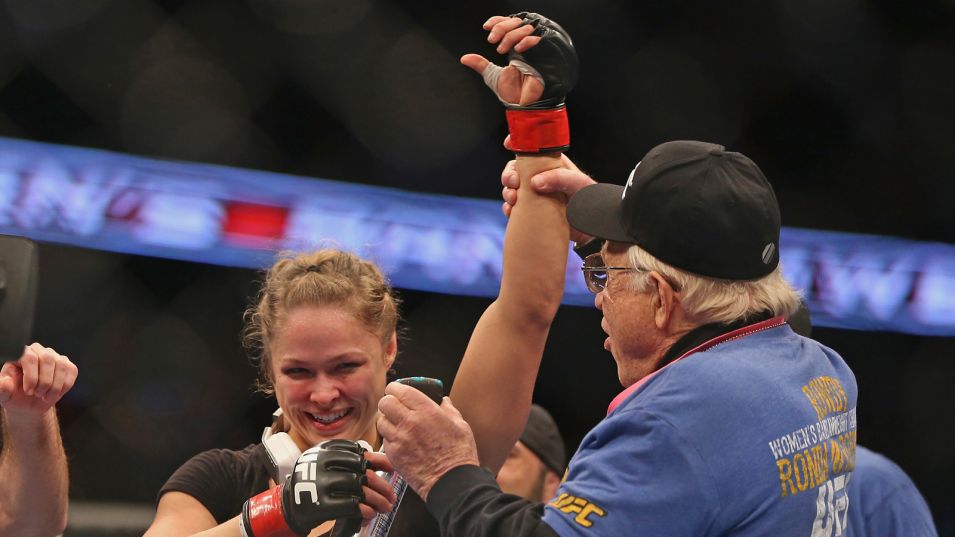 Editor’s note: This article is from February 19, 2014 and was written by Danny Acosta, FOX Sports.

How the times have changed.

LeBell, the 1995 Iron Mike Mazurki Award recipient from the Cauliflower Alley Club, is well acquainted with stardom and Rousey’s ascent into it. Now in his eighties, LeBell was the national heavyweight judo champion in 1954 and 1955. He won the open-weight competitions those years too. He’s the great grandfather to mixed martial arts; representing judo against boxer Milo Savage in 1963 in America’s first-ever mixed fight. A consummate shooter, he held the NWA world heavyweight championship in pro wrestling. He’s a famous Hollywood stuntman too, notably teaching Bruce Lee chokeholds and judo throws. He befriended Rousey’s mother, AnnMarie De Mars, leading up to her winning the judo Worlds in 1984. He’s known Ronda since birth.

“You know what I taught her? I’ll tell ya, but you can’t let this out. Three words when you’re fighting: ‘Break. An. Arm.’”

He attributes Rousey’s star power to confidence and attitude. Being loved or hated is better than being in between with the “wannabees” according to LeBell.

“She’s as sweet as a gal you’ve ever met in your life, but being hard, or villainous, comes easy to her,” LeBell told FOXSports.com of Rousey’s ability to elicit emotion and draw crowds. “She’s good at it, very good. She’s not afraid of anything. Hard work doesn’t scare her.”

You may recognize LeBell as the elderly gentleman straggling behind during Rousey’s Joan Jett “Bad Reputation” walkout. Dealing with the jeers during her last walkout in December, the martial arts legend soaked in the moment, thinking, ‘They came to see her get beat…and she’s not going to lose.'”

LeBell dismisses his role in rounding out Rousey’s appeal as a perfect eight-for-eight armbar finish fighter. At most, he called his pupil WWE Hall of Famer “Rowdy” Roddy Piper to secure his blessing for Rousey to carry the “Rowdy” moniker in MMA at her behest.

“You know what I taught her?” asked LeBell. “I’ll tell ya, but you can’t let this out. Three words when you’re fighting: ‘Break. An. Arm.’”