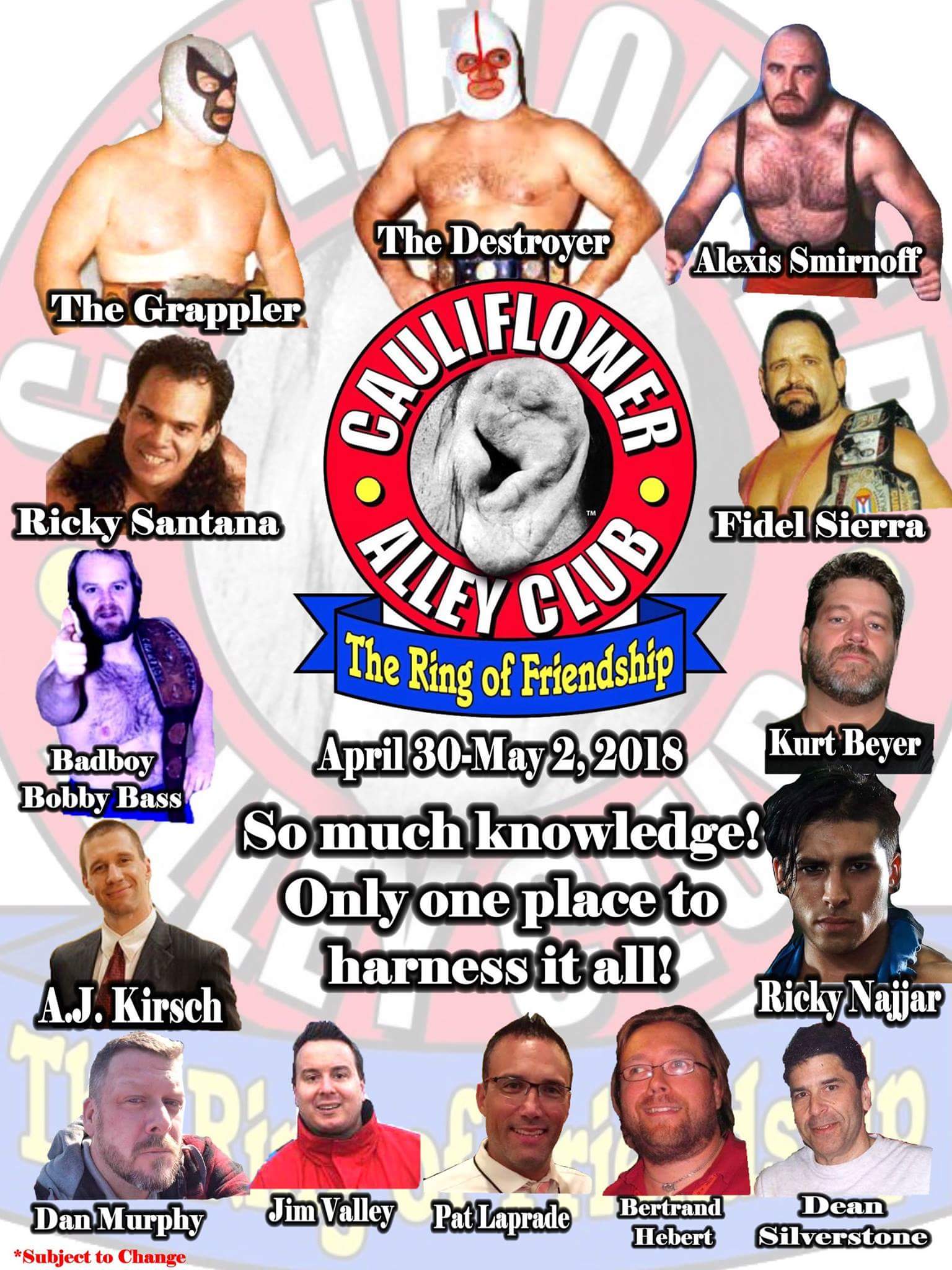 Ask any touring wrestler from the territory days and you’ll find that they’ll all agree that the greatest education they received in the business was, most likely, from the endless hours and travel days that they traveled by car or van with each other exchanging stories and information.

Most often upwards of 300 days a year, night after night, mile after mile, the wrestlers of the territory era were guaranteed a learning experience that, unfortunately, just doesn’t exist for today’s young talent.

Gone are the days when wrestlers plied their trade for months and years on end, day after day and territory after territory to put food on the table for their families. Gone are the territories that once existed across North America that enabled such an enriched learning opportunity.

The territories may be gone but many of the territorial wrestlers are still with us. Most are no longer making the full time grind and when they do travel, for the most part, gone are the days when they’d travel with up and coming talent who are able benefit from their years of experience.

Fortunately, we here at the CAC, have been blessed with the opportunity to have so many of these legendary figures in our midst each and every year. They’ve made a living in the business, picked up knowledge from so many of their contemporaries and, thankfully, are willing to share their knowledge gained from a bygone era with today’s up and coming talents.

In 2018, in addition to it’s traditional seminar subjects, the CAC Learning Series will attempt to capitalize on this abundance of riches that we have within our midst like we never have before.

Without further ado here is the lineup for your 2018 Cauliflower Alley Club Learning Series. As usual in the pro-wrestling world; card subject to change without notice.

Having experience not only in the ring but also on the bodybuilding and fitness stages Ricky Najjar has an abundance of knowledge, especially as it pertains to health, fitness and nutrition for pro-wrestlers.

Ricky will instruct seminar attendees how to present your best possible self by concentrating on how to get into shape, how to stay in shape and what foods to put into your body to obtain ultimate health benefits. At press time Ricky was planning on bringing in some cool fitness related give-aways for his seminar attendees so grab your seat early on Tuesday morning and get ready to participate, stretch and listen in as this dynamic young dynamo shares his knowledge and give-aways with you!

The Cauliflower Alley Club makes a foray into something a bit different in it’s yearly learning series as it begins to explore and discuss lessons learned from and in the territory era. First up, a look at the rich history of professional wrestling in the Canadian province of Quebec.

Quebec, Canada and specifically Montreal has a rich wrestling history that pre-dates the infamous “Montreal Screw Job” by many, many years! The first ever midget wrestler booking office was located there. It is home to an abundance of legendary wrestling families including the Rougeaus, the Vachons, and the Leducs and, of course it was the very first North American wrestling territory of WWE legend Pat Patterson as well as the man later to be known as Andre The Giant.

Join Bertrand Hebert and Pat Laprade, the co-authors of the book “Mad Dogs, Midgets and Screw Jobs!” as they relate tales of this fascinating wrestling territory. Joining in on this panel discussion will be 2018 Men’s Wrestling Award Honoree Alexis Smirnoff, who started his storied career in his native province of Quebec as Michel “Justice” Dubois!

There aren’t too many wrestlers around with the pedigree and credentials of the legendary Dick “The Destroyer” Beyer. The “World’s Greatest Masked Man” champion has had a career that began in the mid 1950’s and has taken him around the world capturing titles wherever he went including the Los Angeles based World Wrestling Association World Heavyweight Championship three times and the American Wrestling Association championship once which he won as Dr. X by defeating Verne Gagne. He inducted Gorgeous George into the WWE Hall of Fame in 2010 and in November of 2017 was awarded with the prestigious “Order of the Rising Sun, Gold and Silver Rays” by the Japanese government for his outstanding contributions to the promotion of mutual understanding between Japan and the United States. Along with Rikidozan, the Destroyer to this day holds the record for the most watched live professional wrestling match of all time with 60 million viewers watching the 1963 Japanese pro-wrestling match.

Dick’s son Kurt has, naturally, been around the pro-wrestling business all his life. He followed his dad and uncle, perennial Canadian favorite Billy “Red” Lyons, into the grappling game after training with his dad and,later, Japanese legend Kenta Kobashi at the All Japan Dojo. Working extensively in Japan Kurt debuted for All Japan Wrestling in Jan. 1993 and later that year worked the first ever father-son tag team match in Japanese wrestling history. Kurt has also competed in Germany, wrestled in the United States and put his family’s patented “Figure Four Leg-lock” submission hold up against the “Spinning Toe-hold” of Dory Funk Jr. in a submission hold vs. submission hold match held in front of a capacity crowd at the Budokan Arena in Tokyo.

Together for the first time in a CAC seminar setting this father and son tandem will discuss their careers including their career highlights and what it’s like to train at the All Japan Dojo. What it’s like working and living as a gaijin in Japan. The differences between working inside and outside of North America and, in Kurt’s case, what it’s like being the son of a wrestling legend and whether or not there were pressures and/or expectations put on him.

Hosted by the very knowledgeable and articulate Dan Murphy (who like the Beyers’ is also an upstate New York native) this CAC Learning Series presentation will definitely be one that you won’t want to miss!

11:00 AM: “The Evolution of the Business. Is Professional Wrestling It’s Own Worst Enemy?”

The term “fake” has long been regarded as a dirty word in professional wrestling, a business that was once believed to be a pure combat sport, the outcomes of which were determined solely on genuine athletic competition.

It is now common knowledge that professional wrestling is a performance. Yet, to this day, the term “fake” is often met with vehement and venomous defense.

A.J. Kirsch returns to the CAC Learning Series with, not so much a seminar, but a discussion on why referring to professional wrestling as “fake” is, in his opinion, accurate exploring the knee-jerk reaction to defend professional wrestling, why the term and the defense are actually two different arguments, and why assuming they are one in the same is detrimental to both the art and the business.

Join us at 11 AM Wednesday morning for what promises to be the single most controversial seminar the Cauliflower Alley Club has ever offered!

1:00 PM: “The Territory Era – Wrestling in the Pacific Northwest (PNW)”

With names like Dutch Savage, “Moondog” Lonnie Mayne, “Playboy” Buddy Rose, Roddy Piper, The Grappler and “Top Gun” Dave Sierra, in many cases getting their starts and/or biggest career breaks in the Pacific Northwest the area has been a hotbed for professional wrestling as far back as 1925 when Don Owen’s father, Herb Owen began promoting professional wrestling in Oregon.

Fortunately, over the past couple of years, we here at the CAC continue to be visited by a contingent of Pacific Northwest wrestling legends and this year some of those legends have agreed to “talk shop” about what it was like wrestling in this territory.

We could hardly do justice to the rich history of the PNW in just ninety minutes so this year the CAC Learning Series will take a look specifically at the states of Oregon and Washington as we leave the PNW Canadian province, British Columbia, for, perhaps, an in-depth discussion of it’s own at a later time.

Joining us for this unique CAC event will be a couple of wrestlers that lived the PNW wrestling lifestyle and a promoter that many considered to be an outlaw promoter when he opened up his office in Seattle, Washington.

Len “The Grappler” Denton, the masked menace that was the scourge of the territory will, no doubt, have a lot to say on his time with Don Owen’s Portland Wrestling office. Did the Grappler really have one leg shorter than the other or was that orthotic boot just an excuse to “load it up” assuring the masked maniac another PNW title victory?

“Top Gun” David Sierra, under three different character names held every title in Portland Wrestling. He’s been both a face and a heel in the PNW and some of the fondest memories of his career can be found here. Mr. Sierra will be on hand to discuss his storied PNW career but security might be needed if things get too heated between old rivals Top Gun and The Grappler!

Find out why Don Owen insisted that Bass change his name upon his arrival in Portland Wrestling in the late 1970’s. Hear his take on the late Lonnie Mayne and other 70’s stars of the PNW mat game.

Find out why Dean Silverstone was considered to be a PNW “outlaw”, why he was labelled a “devil is disguise” by another PNW promoter, how he “almost” had a private meeting with Cher as well as his working relationship with superstars “Big” John Quinn and “Crazy” Chris Colt.

The characters they met. The lessons they learned. Their favorite and least favorite memories. Was Portland Wrestling really considered to be a “small man” territory at one point in time?

No subject will be off limits as the CAC Learning Series takes a look at the storied history of wrestling in the Pacific Northwest by some of the men who lived it. This is one that no true student and/or wrestling historian should miss!!