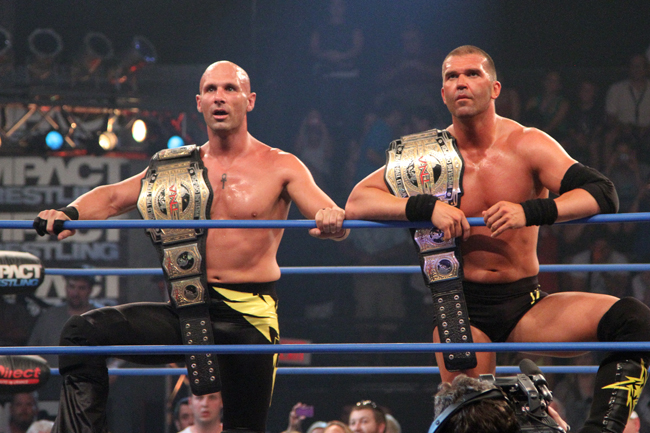 The Cauliflower Alley Club posted the official listing of 2014 seminars.  This year is a star-studded collection of speakers that includes former WWE and TNA stars, as well as some of the most respected minds in the business.  The reunion itself takes place June 2-4, 2014 at the Gold Coast in Las Vegas, NV.  Executive Board Member Morgan Dollar wrote the following:

The seminar series offered at the 2014 reunion has now been finalized, and the five scheduled sessions should have a wide appeal with their various topics. The target audience for the series is of course the many young workers who attend the reunion, but referees, promoters, publicists and others involved with professional wrestling can benefit from them as well.

All that’s required to attend is your reservation for the three-day reunion, signified by your name badge(Name Badge MUST be present to enter seminars). The seminars last about an hour each, and all feature a question-and-answer session at their conclusion. There’s often an opportunity following the seminar for a one-on-one chat with the various presenters as well.

Seminars will be held Tuesday, June 3 and Wednesday, June 4, morning and afternoon. Specific times will be posted prominently near the registration desk. Let’s have a look at the line-up:

“Your Living Beyond Wrestling: A Different Approach”

Vance Nevada spent the past 20 years wrestling across Canada, and given the absence of full-time bookings in today’s ring world, almost always had to hold other employment to make financial ends meet. That situation prevails today for virtually every wrestler with the smaller promotions. But how do you nail down outside employment – or for that matter, full-time employment after your days in the ring are over – with a job application that lists your experience as “pro wrestling”?

Since retiring last year, Vance has become the Economic Development Officer with the thriving community of Souris, Manitoba and its surrounding region. Quite the transition for a wrestler, whose out-of-the-ring employment for years was in security management. How did he do it? “Listing your experience as ‘pro wrestling’ tells an employer absolutely nothing,” Vance asserts, “and it’s doubtful you’ll even get an interview.”

But there is a way to present yourself in a much more effective light that can make all the difference. Vance can speak to that from experience, and he’ll do just that in this year’s seminar series.

“Promotion, From the Inside”

Jesse Hernandez, Jeff Manning and Dan Mirade, between the three of them, have been over all the jumps in the business of promoting independent wrestling. Sometimes they’ve soared over the highest hurdles; a few times they’ve landed on their faces in the mud. But most of the time they’ve used their promotional experience and smarts to present a solid product, and they’ve got a lot of knowledge to share.
They’ll examine matchmaking, booking, development of personas, the whole range of publicity options, seeking out sponsors, marketing sold shows, employing talent as a marketing tool, and much more. They’ll talk about what they look for in prospective talent for their market, whether they’re raw rookies to be developed or seasoned workers or ‘name’ talent being brought in for special events. Then there’s the purely business side of promoting: budgeting, payroll, allowing for unanticipated expenses, dealing with payoff requests, and more.

There’s valuable information for talent as well. Jesse, Jeff and Dan will look at how to most effectively approach independent promoters for bookings, promotional packages, dressing room behaviour, leaving your ego at home, and making yourself valuable to promoters.

Promoter or worker, there’s something for everyone in this session.

“Media-savvy” is a familiar phrase used to describe individuals who have mastered the art of shaping and controlling the message that’s communicated to their audiences in many different ways. And media-savvy today isn’t confined to radio, TV and newspapers. More and more, it’s all about the world of social media, and how to employ it to maximum advantage.

A.J. Kirsch, a wrestler who’s intimately familar with social media and its uses, will conduct this totally wrestling-focussed seminar. He’ll offer a thorough short course that will paint the picture of how to select and best utilize different social media outlets to promote the business and its participants. Wrestlers, promoters, publicists and anyone else with an interest in bringing more attention to our sport will find plenty to learn, and a wealth of knowledge to apply to their future endeavours, during this in-depth session.

A.J. has won plaudits from many on his social media knowledge, and has even guested on the Larry King show to discuss the topic. Being a wrestler himself, he’s that much more tuned in to using his knowledge to advance his career…..and this seminar may do the same for yours!

Dr. Dave Reiss is a practicing psychiatrist with a deep interest in every facet of pro wrestling. Jerry Cohen is a long-time show business agent, who overcame severe medical challenges to represent many top Hollywood stars and pro wrestlers. Brian Blair is one of the best-known names in wrestling, as well as a businessman and politician. Together, they have an intimate knowledge of the many “barriers” in life and in wrestling, and some strategies that can be used to confront adversity.

The stresses of being a pro athlete range from the mundane to the major. There are the inevitable career path interruptions and disappointments: mediocre talent to work with, a stalled push, a program gone awry, suspension, firing, a contract not being renewed. Injury or illness, family responsibilities, effects of injuries piling up and chronic pain can have a major impact. Injury ranging from short-term to career-ending, long-term disability and more must be confronted.

This will be a valuable round-table discussion, recommended for every worker since it’s virtually a given that they’ll all face one barrier or another in wrestling and in life.

This one’s for you, if you have the ambition, drive and desire to elevate yourself in today’s wrestling world!

Christopher Daniels and Frankie “Kaz” Kazarian, most recently a starring tag team in TNA, pool their very considerable experiences to give you their recommendations on advancing your ring career. Conditioning, cardio, ring work, promo skills, protecting your opposite number and much more about your work will come to the fore. They’ll talk about the important topic of proper professional behaviour, an ingredient for success that’s too often missing: attitudes, egos, cooperation, getting along with your peers, dressing room etiquette, and dealing with promoters and bookers. As with all the seminars, Chris and Kaz will wind up the session with a question-and-answer session.

“Climbing the Ladder” will run the entire gamut of today’s wrestling. Given the calibre and success of these two modern veterans, those who take their guidance to heart should have an enhanced chance of success in the ring.

See you at the reunion!