Home / Indies / Can Ricky Martinez win back the ECWA title?

Can Ricky Martinez win back the ECWA title? 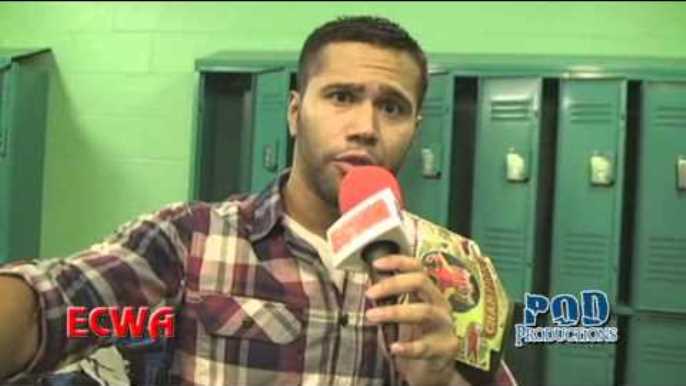 The ECWA has seen it’s far share of moments that inspire you, make you cry, and even anger you over its near 48 year history.

Perhaps none was more satisfying than when Matt Saigon finally overcame the odds, and Mike Tartaglia, to become the NEW ECWA HEAVYWEIGHT CHAMPION! It was a moment that will forever be etched into independent wrestling history and the hearts of those in attendance.

The Rise of Saigon was in full effect! Being the fighting champion he was, he gave the first opportunity to face him to Bobby Shields… himself someone who the Boss had it out for and his longtime friend. Of course, this angered the outspoken former champion Ricky Martinez who feels 1) he never should have had to defend the championship at the Super 8 Tournament in the first place and instead be in the tournament and 2) against two men who both hated him.

Shields and Saigon destroyed each other in their match last month at Spring Battle. They fought all over the ring and into the crowd at different points raising questions if their friendship could survive the battle to win ‘Big Red’.

Little did they know that Ricky Martinez had a plan of his own. Earlier in the night, Martinez wrestled under protest and defeated Jaxson James and immediately went to work hatching a scheme to get back at the champion.

At the end of the heavyweight title match, it looked to be a respect for respect showing for Shields and Saigon as they shook hands. But as soon as Shields had left the arena Ricky Martinez pounced on a weakened champion.

Badly beating and publicly humiliating Matt Saigon, Ricky Martinez took great happiness in strutting around the ring holding the championship he felt was his. The ‘Vietnam Phenom’ was helpless… then it was revealed Ricky Martinez had gained a new ally!

Not only does he have the beautiful but deadly ECWA Women’s Champion Renee Michelle but he’s now joined the newly formed PAN CORP led by new ECWA roster member AJ Pan… a group dedicated to “raising the stars of the ECWA to even greater heights.”

Who is AJ Pan? Why’s he in the ECWA? Why did he recruit Ricky Martinez? All valid questions that we may never fully know.

But Matt Saigon is not a pushover… scraping himself off the mat he took to the mic asking ECWA matchmaker Joe Zanolle give him a one on one match for the ECWA Heavyweight Title against Ricky Martinez on Saturday June 20 at Raising the Bar. Zanolle agreed and made the match on the spot.

And so on Saturday June 20 in Woodbury, NJ it’s a big time MAIN EVENT as Matt Saigon defends the ECWA Heavyweight Championship against Ricky Martinez!

Can the Rise of Saigon continue?

Or can Ricky Martinez win back the ECWA Heavyweight Title with help from his new “friend”?

Tickets available in advance (via Pay Pal) and at the door:

-To buy now, go to http://ecwaprowrestling.com/ecwa/about/tickets/