Can TNA Get Over?

By OWW Contributor on September 16, 2014@owwcom 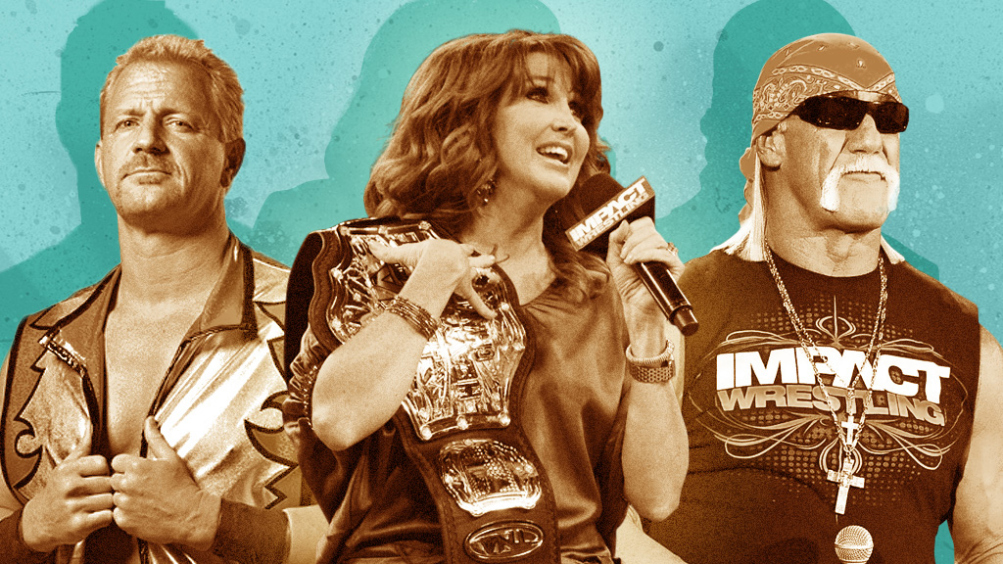 Rumors have swirled about the demise of Total Nonstop Action Wrestling. Is this the end for the company? And will professional wrestling ever support two major promotions again?

The second-largest professional wrestling promotion in the United States runs out of a 400,000-square-foot glowing red-brick building in Nashville’s SoBro neighborhood, not far from the Country Music Hall of Fame. With rented space in the basement and on the third floor, Total Nonstop Action Wrestling is one of more than 140 businesses based in Cummins Station, and when I meet Dixie Carter, the embattled 49-year-old president, she receives me in a corner office covered wall to wall with mementos and tchotchkes. “If you hear me holler, come running,” she tells the TNA rep exiting the room. Carter made the same crack when I interviewed her in New York City.

“This is one of my favorite things,” she says, walking toward a psychedelic painting. “When we had our first issues with Jeff Hardy,” the TNA daredevil who has struggled with drug and alcohol abuse throughout his career, “he did this painting called The Charismatic Apology.” She shows off autographed baseballs from TNA fans David Eckstein and David Dellucci, an Ole Miss alum like Carter. There’s also a life-size cardboard cutout of John Wayne, a gift from her dad, and a Frank Wycheck bobblehead. “He’s a buddy of mine,” Carter beams. “Remember the Music City Miracle?”

Dixie Carter is charming — a neighborly kind of person — and nearly 5-foot-9 in her chunky Michael Kors heels. Bracelet upon jangling bracelet circle her wrist, and she has maybe the largest diamond ring I’ve ever seen up close. “That is a Texas thing,” she says of her bangles. Her voice, a soft Dallas lilt, has its own smile even when touching on layoffs that TNA doled out just one week before my visit. “We were overstaffed in certain cases,” Carter says. “Certain times you have to take a step back to take a massive step forward.”

The recent downsizing was the latest step back for TNA, the well-funded, talent-stacked wrestling promotion whose goal since its inception in 2002 was to be the alternative to and perhaps even competition for Vince McMahon’s World Wrestling Entertainment. But while Carter claims the company is profitable,1 she acknowledges TNA’s annus horribilis. Live events are down. Ratings have eroded — 2013 was the first year since 2006 that Impact Wrestling, TNA’s two-hour flagship program on Spike TV, averaged below a 1.0 rating, less than one-third of what WWE’s Raw pulls in on Monday nights. Main-event talent such as Sting and AJ Styles are gone, as are respected stalwarts Chris Sabin, Christopher Daniels, and Kazarian. Even the creative team has thinned: In the past 14 months, Bruce Prichard, Eric Bischoff, Hulk Hogan, and Vince Russo — men with historically successful track records who were responsible for the majority of the promotion’s story lines — have exited.