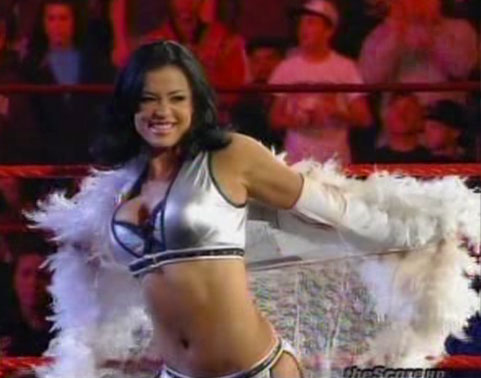 Candice Michelle Discusses Her Transition From Leaving The WWE Into The Role Of Motherhood, Why She Believes That Her WWE Release Came At A Perfect Time In Her Life, Her WrestleMania Memories, If She Was Approached To Join TNA’s Knockout Division, Whether Or Not The In-Ring Chapter Of Her Career Has Come To A Close, Her Forthcoming Projects With Go Daddy, The Return Of The WWE Diva Search, Plus Her Message To The WWE Divas That May Feel Their WrestleMania Spot Is Being Taken By Snooki

Candice joined The Big Mosh, “The Chairman of the Board” Todd Vincent, & Sizzlin Sauces’ Chef Bud Selmi for her exclusive interview with The Monday Night Mayhem Radio Network, which is now available in Windows Streaming Media or via the official MNM Podcast on iTunes:

Her transition from leaving the WWE into the role of motherhood & why she believes that her WWE release came at a perfect time in her life: “For me, it’s been an awesome transition. I think it’s because I loved my time at the WWE. I loved the people I worked with, and I felt blessed there. And then when my released happened, I think it came at a perfect time in my life. I don’t think I was quite ready to say ‘I’m done,’ but when they released me, I realized that my life had a new venture. And then when motherhood came along, it was the best thing in the world. Her smile warms my heart everyday, so it’s been an awesome transition, and I feel very blessed in life.”
Her message to the WWE Divas that may feel like their WrestleMania spot in being taken by Snooki: “The WWE is smart for putting her in WrestleMania because of the advertising it will bring. However, if I was a WWE Diva currently in the locker room, I’d be pissed off. You’re busting your ass every night, you’re going overseas, and traveling, and driving, and someone just comes in that has never wrestled a day in their life and has your spot? That’s sh*tty. My advice to them is be who you are, do the best you can, and get noticed. Snooki is noticed for what, being a drunk on a TV show being wild & crazy? Do I respect her? Yes. Does she deserve that spot? No.”
Why she feels the in-ring chapter of her career is closed & whether or not she was approached by TNA to join their Knockouts division: “When I first left WWE and my non-compete clause was coming to an end, there was a mention that there was an interest in that door to be opened. For me, I was on the biggest stage that there was, and it felt like it was just a time in my life to close that chapter. I think TNA is great, and I sometimes prefer to watch TNA. My friends are there. I think the product is awesome. I love what they do with the girls division over there. It’s different. I feel like I’ve been watching the same thing over & over sometimes with the storylines getting redundant on WWE. I’ve always said ‘never say never,’ but in reality, I think that chapter is closed for me.”

Much more is contained in Candice’s exclusive interview with The Monday Night Mayhem Radio Network (as part of “In The Kitchen With Chef Bud”), including her candid thoughts & comments on her legacy as a WWE Diva, her fondest WrestleMania memories, the Divas she enjoyed working with, Trish Stratus‘ recent WWE return, if she believes the returning WWE Diva Search can be as effective & successful as it was previously, her forthcoming projects with Go Daddy, plus so much more! Be sure to check out the world of Candice Michelle online at your fingertips by logging on to her official website (located at www.CandiceMichelle.com) & her official Facebook page (located at www.Facebook.com/CandiceMichelle), and by following her on Twitter (at www.Twitter.com/DivaCandiceM