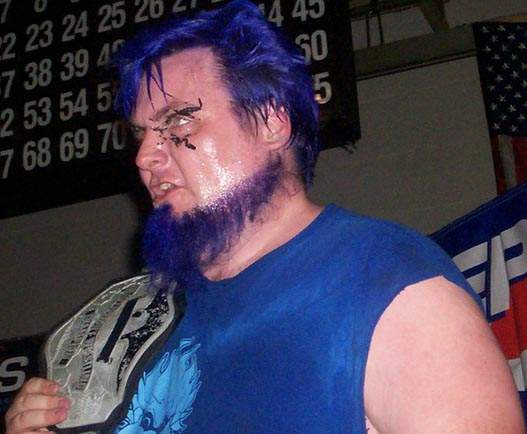 Â
Cleveland All-Pro Wrestling returns to the famed Turnerâ€™s Hall, located at 7325 Guthrie Ave. in Cleveland, for a very special day and time on SATURDAY evening October 6. Doors open at 6:00 p.m. for our special belltime of 7:00 p.m. This WILL be a taping for CAPW TV on Sports Time Ohio, so bring your signs, banners, and enthusiasm, and be prepared to have your image available in nearly 3 million homes in the state of Ohio, and nationwide on select systems. Tickets are available in advance at any of our ticket outlets, and also at the door the afternoon of the event. Get ready for three solid hours of the best professional wrestling in the area: Cleveland All-Pro Wrestling.

Â
Already scheduled on the cardâ€¦
Â
CAPW Heavyweight Title: Jason Bane vs. Raymond Rowe
Jason Bane had finally accomplished a goal nearly one year in the making when he regained the CAPW Heavyweight Title last August at CAPWâ€™s â€œNight of Legendsâ€ anniversary show. However, moments into his celebration, his past caught up with him in a big way. Raymond Rowe, formerly Baneâ€™s World Tag Team championship partner as a member of The Suplex Machines, re-emerged after one year away from CAPW, and he issued a very stern and violent warning to Jason Bane. Ray Rowe is back, heâ€™s pissed off at his former partner abandoning him in his eyes, and he wants the CAPW Heavyweight Title.
Â
Faith in Nothing will defend the CAPW Tag Titles!
They are the most dominant tag team perhaps in Cleveland All-Pro history, and have left a path of destruction on their road to solidifying themselves as THE team to beat in the state of Ohio. From their unforgettable Ladder Match war, to their defeat of legendary tag team competitors Tracy Smothers & Chris Hamrick, Christian Faith & Vincent Nothing have personified the meaning of â€˜championâ€™. On Saturday, October 6, FIN face their latest challenge on the road to tag team immortality.
Â
CAPW Jr. Heavyweight Title: Super Hentai vs. The Aftermath
Super Hentai has traveled the world over, perfecting his craft, building his reputation, and winning countless championships. After watching a title held hostage by men he felt unworthy of carrying the crown, Super Hentai is on a mission to restore prestige and credibility to the CAPW Jr. Heavyweight Title one victory at a time. The Aftermath is still beginning his ascension in professional wrestling. While some detractors may say The Aftermath may not deserve a match of this caliber, Aftermath is hoping to silence all critics in one night by defeating the top dog and established veteran. Hentaiâ€™s passion and determination or Aftermathâ€™s youthful exuberance, which will win out with the Jr. Heavyweight Title at stake?
Â
Da Munchies & JT Lightning vs. The Clash & ???
The unstoppable reign of self-proclaimed six-man tag champions Dick Trimmins, Too Cool Abdul, and JT Lightning continues. While they may not have defeated the Von Erichs and Freebirds like theyâ€™d like to believe, they have dominated some of CAPWâ€™s best and brightest singles and tag team stars throughout 2007. Two more young athletes looking to make a name for themselves, The Clash, have stepped forward to accept the challenge, however a third partner has yet to be named. Will The Clash have a special surprise for the mythical champs or will JT & Da Munchies continue their dominance?
Â
Johnny Gargano vs. Gregory Iron
CAPWâ€™s inspirational success story Gregory Iron makes his return to the ring after a severe concussion that almost cost him, not just his career, but his life as well. Iron continues to overcome odds that few if any gave him a chance of defeating, but one man who wants to bring an end to Ironâ€™s inspirational story is Johnny Gargano. Gargano, already with a chip on his shoulder, already of the belief heâ€™s better than everybody else, will take great pride in inflicting pain on someone he deems so inferior. But Gregory Iron has conquered greater obstacles than Gargano. Can Clevelandâ€™s cockiest athlete put Iron back on the shelf, or will Gregory Iron hand Johnny Gargano an ego-deflating upset loss?
Â
The Rogue Make Their CAPW Debut
â€œWe are non-conformist, politically incorrect, and unapologetic. Weâ€™ve been shunned by society. Weâ€™ve been labeled as outcasts. Weâ€™ve been told we donâ€™t belong. We do not abide by the rules of your culture. We donâ€™t care if you choose to accept us. We are renegadesâ€¦ deviants, rebels. We do not answer to your rules and values. We are beyond understanding. And what you canâ€™t understandâ€¦ you canâ€™t possibly control. On October 6… We make our presence known again. The Rogue is coming to CAPW.â€
Â
Keep checking back to CAPW Press Releases for more information on CAPWâ€™s October 6 live event.
Â
CAPW ON SPORTS TIME OHIO
Â
Every week, CAPW will deliver one solid hour of cutting-edge, intense, athletic wrestling action to STO viewers featuring a cavalcade of wrestling stars. See the best of national and international stars, past and present, as well as the brightest home-grown stars in the state of Ohio! The program will be hosted by play-by-play commentator Joe Dombrowski and color analyst Jamie Scott, who will bring you all the hot matches, backstage interviews, exclusive footage, and so much more each and every week on Sports Time Ohio! Here is the upcoming schedule for CAPW programming on Sports Time Ohio:

Sports Time Ohio is available to nearly 3 million homes throughout the state of Ohio and into surrounding states, and is also available nationwide on select satellite dish packages. Check local listings and channel packages for availability. For more information log on to www.sportstimeohio.com.

Cleveland All-Pro Wrestling has been the premiere brand of professional wrestling in the state of Ohio throughout it’s over-thirteen year existence. CAPW utilizes a blend of the most talented and exciting local and national attractions today for a unique fan experience, featuring names such as Tracy Smothers, M-Dogg 20, Faith in Nothing, Johnny Gargano, Josh Prohibition, Irish Airborne, JT Lightning, Zach Gowen, Jason Bane, and many more. Cleveland All-Pro Wrestling can be seen weekly on Sports Time Ohio in nearly 3 million homes. For more information please visit www.myspace.com/capw