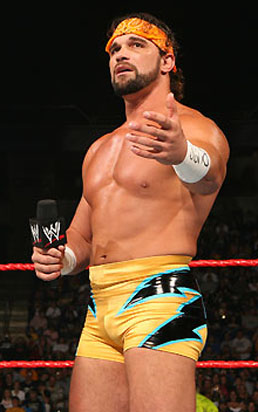 Charlie Haas Discusses Why He Wants To Start A Petition To Have Shelton Benjamin Not Resign With The WWE, Which Member Of The WWE Creative Team He Confided In The Most During His Return To The Company, & Why Ring Of Honor Could Be The Next Destination For Him

Former WWE World Tag Team Champion & Slammy Award winner, Charlie Haas, was one of the special guests on this week’s live edition (03/08/09) of Monday Night Mayhem (presented by ReelWrestling.com), hosted by The Big Mosh, Blade, & “The Chairman Of The Board” Todd Vincent. You can feel The Mayhem live & in streaming audio every Monday night (at 7PM ET/6PM CT), exclusively on The Monday Night Mayhem Radio Network (www.MondayNightMayhem.com).

One-half of the one of the most dominating tag teams in WWE history, The World’s Greatest Tag Team, joined The Monday Night Mayhem Radio Network for his return to the airwaves of “Your Home Of Wrestling Radio,” which is now available in Windows Streaming Media or via Monday Night Mayhem’s official Podcast on ITunes:

How much of his second stint with World Wrestling Entertainment was a “life experience” after the first time being there: “It was definitely a life experience. It was just an ongoing nightmare for me. They promise they’re gonna do this with you, and they don’t do it. They tell me they are gonna bring me in to feud with Shelton (Benjamin), and they don’t do it. As out lives went on we had our first child & then our second child, you wanna quit, but you have to support your family. Then you’ll like ‘Alright if I gonna eat crap to help support my family and give my wife & kids a better life, better than I ever had, then that’s what I’ll do.’ But eventually, you could only handle so much before you gotta walk away because you bring that misery home, and it’s unhealthy. It’s a unhealthy work environment, but then when you bring it home, you make it a unhealthy home environment for your family, and you can’t do that. It just really feels good to be away from that. No one understands unless you’ve been there.”

Becoming a great fit within the confines of Ring Of Honor: “I agree with you 100%. I’ve been watching the product, I know Jim Cornette personally, and I just love what they’re doing down there. I’ve worked with Cornette; I like the formulation of what he’s done in the past in OVW and what he’s doing now. I think I’ll be a great fit. Those kids could go, and they wrestle. These men wrestle, and that’s what it’s about. I have so much left in my tank. My body’s healthy. I’m determined. I’m not gonna sit back and be upset & retire, I wanna go out and prove myself. I wanna prove myself to all the skeptics & all the creative that they didn’t know what they had.”

What is more appealing to Charlie when he makes his return to the ring on television: TNA or Ring Of Honor: “I will end up at one or the other I promise you that. I just wanna go out & wrestle. I wanna be given the opportunity I never had, and that’s it. I wanna have fun: that passion is back, and I feel like a weight has been lifted off my chest. The odds are good I will end up somewhere, and the whole new destiny for Charlie Haas will definitely take a turn, and it’ll be a turn for the best. Not just for the fans, but for me & my family as well.”

Some of the superstars/performers that Charlie would want to face in TNA that he never had the opportunity to face in his career: “There’s another Elijah Burke (‘The Pope’ D’Angelo Dinero), never did anything with him. Look what’s happened. It’s the same thing; the WWE didn’t see anything in him or he’s not entertaining enough. It’s their loss, and that’s just one of them. Shannon Moore was another one who was never given the opportunity. Jeff Hardy is the most popular wrestler there is in the world today. Kurt (Angle) is one of my best friends, we talk all the time, and I would love to run with him or Jeff or any of those wrestlers: AJ (Styles), Samoa Joe.”

Why Shelton Benjamin, like himself, has not been used to the best of his ability during his time in the WWE: “It’s either someone doesn’t like him in creative or he’s just too good of a wrestler, or he just makes things look too good & too easy, or it’s just very political. Someone at the time doesn’t want him to succeed. They have who they want to push, and he’s just not one of them. And it’s unfortunate, because he is probably the most God-gifted athlete in sports (pro wrestling & the WWE), but they don’t want to utilize that, so it’s their loss. That’s why I’m begging him not to sign back. He’ll probably stay for the money, but he could utilized a lot better elsewhere I’ll tell you that.”

More is contained in Charlie’s interview with the Monday Night Mayhem Radio Network, including his candid thoughts & comments on the real story behind his impersonations of past & present WWE Superstars, Legends, & Divas (including whose idea it was for the gimmick & which member of the WWE Creative Team that Charlie confided in the most during his return to the company), why the WWE almost pulled Shelton Benjamin from the forthcoming Money In The Bank Match at WrestleMania XXVI, & so much more! Log onto Charlie’s official website & Facebook pages (located respectively at http://www.HaasOfPain.com & http://www.Facebook.com/HaasOfPain), and be sure to check out the official online portal of Custom Muscle, presented by Charlie, along with his wife (Jackie Gayda Haas) & former WWE Champion, John Bradshaw Layfield (located at http://www.NutritionMarket.com).