By OWW Contributor on September 5, 2013@owwcom 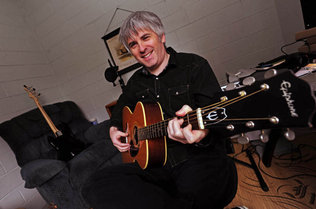 Editor’s note: This article originally was published in charlotteobserver.com and was written by Leah Harrison.  Photo courtesy of David T. Foster III.

When Charlotte songwriter Mark Crozer got a call saying a wrestler had been using one of his tunes as theme music, he was sure it was a mistake: some other Crozer, some other song.

Though he periodically uploaded his music to licensing websites so it could be used on television, he couldn’t imagine his songs being used as part of a professional wrestler’s soundtrack – he’s no Nickelback or Marilyn Manson.

But Florida wrestler Bray Wyatt had chosen a Crozer song, “Broken Out in Love,” as his theme music, used to complete his persona – a deranged cult leader. This summer, Wyatt was signed to the WWE Raw, a move that usually results in rebranding and new theme music, but Wyatt retained his character and song. The WWE bought the copyright from Crozer and renamed the song “Live in Fear.”

A transplant from England, Crozer and his family moved to Charlotte two years ago to be closer to his wife’s parents. Since moving, he has kept playing with the Scottish band, Jesus and Mary Chain, as well as the more local Mark Crozer and The Rels. Merely performing rarely pays the bills. Crozer has found selling songs to television shows – even as background music – is a great way to get your music heard.

WWE has immediately propelled his song into listenership numbers he didn’t think we possible. WWE broadcasts to 14 million fans per week in the United States alone, which doesn’t account for the other 150 countries that receive the show.

When “WWE Raw” airs, Crozer’s song sells more on iTunes, his website is visited more and his “likes” go up on Facebook. Many of the social media comments state that they checked him out because of Wyatt.

“Television seems to function like the new MTV,” Crozer said. “Music videos were how you got your music heard, but now it’s television. If you had a piece of music in a high profile show, suddenly there are millions of people hearing your music. A lot of those people will turn to the internet to easily look up the song. I was surprised – the show airs on Monday night, and instantly, my email inbox fills up with tweets and contacts on Monday nights.”