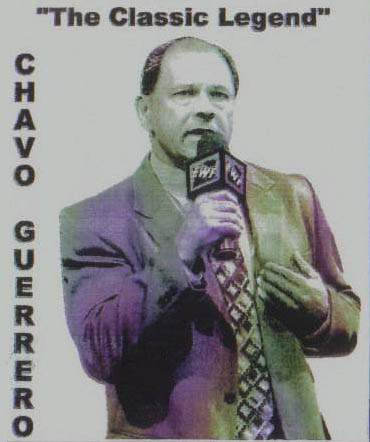 Chavo “Classic” Guerrero, Sr. Discusses His Surprise WWE Return On The “Old School” Edition Of RAW, The Five-Year Anniversary Of Eddie Guerrero’s Passing, How Important Winning The WWE Championship Was To Eddie, His Niece (Shaul) Carrying On The Guerrero Name In The WWE, & Vickie Guerrero‘s Evolving Role On WWE Television

Former WWE Cruiserweight Champion & member of the legendary Guerrero family, Chavo “Classic” Guerrero, Sr., was one of the featured guests on this week’s live edition (11/15/10) of the award-winning Monday Night Mayhem. You can feel the “MNM Fall Tour ’10” every Monday evening (at 7PM ET/6PM CT), exclusively on The Monday Night Mayhem Radio Network (www.MondayNightMayhem.com).

Chavo joined The Big Mosh & “The Chairman of the Board” Todd Vincent for his return to “Your Home of Wrestling Radio” (as part of Monday Night Mayhem’s “Night For Eddie”), which is now available in Windows Streaming Media or via the official MNM Podcast on iTunes:

What it tells Chavo when he hears fans chant his brother’s name in arenas around the world & mentioning him in such high esteem/regard still to this day, five years after his passing: “Eddie had that magic. He had that charisma, that once he really got to be the Eddie Guerrero he wanted to be and get away from the Guerrero shadow, he had that charisma that could charm the people, whether he was a good guy or a bad guy. When he was a bad guy, people wanted to see him cheat. It was amazing. There’s certain people that stand out in every profession, and Eddie Guerrero was certainly one of those people that stood out in the wrestling profession.”

His memories about Eddie winning the WWE Championship from Brock Lesnar at No Way Out 2004 and how important that win & championship victory was for Eddie both personally & professionally: “Well, I was managing my son in the WWE at that time, and we were doing that big storyline where Eddie & Chavo were kind of fighting against each other. That was a storyline, but in real life, Eddie & I had some conflicts going on. We always got along, but at that time, it was a Guerrero moment. We were at The Cow Palace, and I was behind there watching it. I had hunch, and I had gone to tell Eddie to have a great match, but I didn’t know they were going to give it to him. Nobody knew. They kept it very hush hush. What a match. Every single section of that match I enjoyed. I still go back today and watch that match. Brock Lesnar was very professional. Man, they had a match. The bumps that Eddie took…Wow! When he won, I was sitting back there (where they put all of the chairs, where they have the monitors, and I jumped up. I was one of the fans. I marked out to tell you the truth. I became like a big fan of Eddie Guerrero. I didn’t get to see him until way later. I think I was the last one to congratulate him, again because of the storyline we were doing. We take it very serious, as old school does. When I finally saw him, I gave him a big hug and said ‘Way to go man. Congratulations. Wear the belt proudly.’ We met later on with my mother at a sushi place, and we continued to party that night very calmly. Everything was so good. It was one of those unforgettable moments and unforgettable nights that you cherish and that you go over and over in your mind, and he deserved every bit of it.”

Some qualities & character traits about Eddie that fans may not know about him & what separated his brother from everyone else: “Eddie was very generous, he was sometimes too generous. He’ll give you the back off his shirt. As far as money’s concerned, he helped so many people out with money, and if he saw somebody hurting, he had a great heart. He had such skill & knowledge of the Bible where he could go in there and talk to you about the Bible, and he knew what he was talking about. He wasn’t really the type of person that would quote from scriptures, but he would explain to you in a way that he would bring it down to your level or up your level, whichever case it was. Don’t get me wrong, he had a very strong character when he got mad, and he was a very strict father with those girls. I almost felt kinda of sorry for them, but he said ‘That’s the way it’s gotta be.’ But Eddie just had that great character. You could smell it from him. You could get the aurora from him that he was a real person. He wasn’t imitating anybody. He wasn’t putting up a facade of a character. He was Eddie Guerrero. Hhe would come around to you like Eddie Guerrero, and you could tell it was legit.”

His opinion on Eddie’s daughter/his niece Shaul recently signing a developmental deal with the WWE & the legacy of the Guerrero family continuing into another generation: “My dad never approved of women wrestlers. Put it this way: Shaul is going to be the first Guerrero woman to get into the business. If I thought like before, if I thought like the way my father thought, I would be not really too much into the idea, but times change. If that’s what my niece wants to do, then I have the full support of her. I appreciate the WWE taking her in, and giving her the opportunity, and paying her to train, which is even better. It’s going to be up to her to get better and better everyday.”

More is contained in this exclusive interview with Chavo Classic, including his candid thoughts & comments on his surprise return to WWE television this week as part of the “Old School” edition of Monday Night RAW, how main-eventing WrestleMania XX left a lasting impact on his brother’s life, Vickie Guerrero’s evolving role on WWE television since her return to the company, plus so much more! As part of Monday Night Mayhem’s celebration of the life of Eddie Guerrero, we strongly you to log on to Chavo’s official website (located at www.geocities.co.jp/Colosseum-Athene/1956/11.html). Hear your phone calls, Facebook messages, & tweets as part of a fitting tribute to a superstar whose spirit will truly live forever. This is “A Night For Eddie” wrestling fans: Viva La Raza!

Related Items
← Previous Story How does WWE get out of this stipulation?
Next Story → OWW Radio preview with Vance Archer