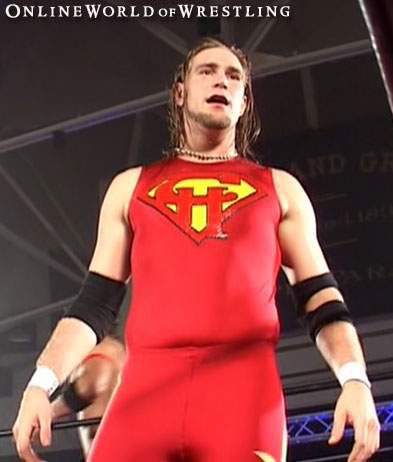 Chris Hero  Discusses Reforming The Kings Of Wrestling & Recapturing The Ring Of Honor World Tag Team Titles At The Big Bang Pay-Per-View In Charlotte, Previews His Matches vs. Petey Williams & Tyler Black This Weekend In Dayton & Chicago, The Biggest Thing He Learned From His Year-Long Feud With Lance Storm, & The Possible Repercussions Of The Jim Cormette/TNA Situation & If/How Ring Of Honor Will Be Affected

One-half of the Ring Of Honor World Tag Team Champions & The Kings Of Wrestling, Chris Hero, was one of the special guests on this week’s edition (04/19/09) of Monday Night Mayhem (presented by ReelWrestling.com), hosted by The Big Mosh & “The Chairman Of The Board” Todd Vincent. You can feel The Mayhem live every Monday night (at 7PM ET/6PM CT), exclusively on The Monday Night Mayhem Radio Network (www.MondayNightMayhem.com).

Chris joined The Big Mosh & “The Chairman Of The Board” Todd Vincent for his first-ever appearance on “Your Home Of Wrestling Radio” (to preview Ring Of Honor’s double-shot weekend in Dayton, OH & Chicago, IL), which is now available in Windows Streaming Media or via Monday Night Mayhem’s official Podcast on ITunes:

Interview highlights courtesy of The Mayhem’s official correspondent, Paterson From New Jersey:
His feelings on putting back together “The Kings Of Wrestling” With Claudio Castagnoli & recapturing the Ring Of Honor World Tag Team Titles At ROH’s “Big Bang” Internet Pay-Per-View in Charlotte, NC: I will say that it was just a matter of time. Both Claudio (Castagnoli) & myself have been around the horn together for a little over eight years now. We have gone through every dynamic you could imagine: from teacher to student, to roommate, to best friend, to roommate to no longer roommate, to no longer keeping in contact to the optimum of our careers, and it just made sense for us to get together. The sum of two parts is greater than both individuals, especially in this case, because I can’t see any tag team in wrestling right now better than the two of us, and I really appreciate Ring Of Honor giving us the opportunity to show that to the world. Pro Wrestling NOAH put us on a pretty big platform in January in their Global Tag League, and we carried that momentum to the states, and we put on a helluva match with The Briscoes in Charlotte, probably our best tag match together Claudio & I.”

The biggest thing that Chris took away from his year-long program with Lance Storm last year: “Lance is the consummate professional. He took almost two years off, and showed up in amazing ring shape, and put on a helluva match, which if you have seen anything he did in the few years of his career, he really wasn’t given the platform to show his true ability. When someone takes that much time off, they could have all kinds of rust and just be out of touch with the way wrestling is these days. In many ways, it was a ‘career match’ for me, but I think in many ways, it was a career match for Lance as well. I think we both benefited greatly confidence-wise from that match: Lance proving to himself he can still go and still put on a match of the night. It was also very important for me to have that match & to have a successful match. I was very pleased with the end result, and it did wonders for my confidence.”

Returning to his hometown of  Dayton, Ohio this Friday night: “I got Petey Williams in Dayton. Dayton’s my home, that’s where I came up & where I started to train to wrestle. Dayton…I just can’t lose. My last match there I wrestled Bryan Danielson in the main event, and I came away with the victory, and now I have Petey Williams. He is a great wrestler, and I have not wrestled him in a singles match in six years in Lafayette, IN. I’m looking forward to see how the two of us mesh in the ring, and it could be a bit of a sleeper match.”

Possible repercussions of the Jim Cornette/TNA situation and if Chris fears that the wrestlers could be affected: “Personally, I would say that is nothing to worry about. Like anything else, if you sit & worry about it, one of two things happen: your worries come true & then you’ll be annoyed the while time or they won’t come true&d you would have worried for no reason. I don’t really give much credence to those things. They happen, they happen. If not, fantastic. I think we are all focused on giving the fans the best show possible, the best matches as possible, & the most unique combinations possible…so if that happens, it sucks, but that’s not something I’m gonna focus on.”

More is contained in this exclusive interview with one-half of The Kings Of Wrestling/ROH World Tag Team Champions, including Chris’ reaction to Ring Of Honor going back to Toronto for their next Internet Pay-Per-View, who has had the most positive impact on him in ROH, how he has been preparing for his potential ROH World Title Match vs. Tyler Black this Saturday in Chicago, what the fans should expect in New York City on May 8th against The Motor City Machine Guns (as himself & Claudio Castagnoli will defend the ROH tag team gold at The Manhattan Center), & and where he sees himself wrestling five years from now. Rumors have circulated that World Wrestling Entertainment has been interested in Chris for quite some time, so does Chris see himself joining CM Punk in the WWE in the immediate future? The only way to find out the answer to this question & so much more is by feeling The Mayhem experience & listening to Chris’ first-ever appearance on “Your Home Of Wrestling Radio.”

Stay up to date on what’s next for “That Knockout Kid” by logging onto his official MySpace page (located at http://www.MySpace.com/TheChrisHero), and follow Chris via his official Twitter account (located at http://www.Twitter.com/TheChrisHero). Head on over to http://www.ROHWrestling.com for ticket information on ROH’s return to the mid-west (this Friday in Dayton, OH & this Saturday in Chicago, IL), and don’t forget to experience the first edition of “Ring Of Honor On The Road” (presented by TicketRelief.com) — as Kevin Kelly (the voice of ROH’s internet PPV’s) previews both events this weekend & makes the official announcements of Ring Of Honor’s return to Buffalo, NY (on Friday, June 18th at The Erie County Fairgrounds’ Agri-Center) & the blockbuster news of ROH’s next internet Pay-Per-View the very next night (on Saturday, June 19th) at The Ted Reeve Arena on Toronto, Ontario, Canada.

“Your Home Of Wrestling Radio” is officially presented by http://www.ReelWrestling.com, where your favorite Superstars are just one click away! The award-winning Monday Night Mayhem (voted on by you, the fans as the “Show Of The Year” in the 2009 & 2010 Wrestling Radio Awards) is also sponsored by: Sizzlin’ Sauces (the official hot sauce of The Mayhem: http://www.SizzlinSauces.com), Ticket Relief (the official online traffic school of The Mayhem; register today for your simple & hassle-free defensive driving course and save 20% by using the promo code MAYHEM: http://www.TicketRelief.com), & B. Brown Video (where you can relive the moments & memories of professional wrestling’s rare & vintage moments: http://www.BBrownVideo.com).

Check out the official Monday Night Mayhem Audio Vault, along with the official MNM Podcast on ITunes, and listen to select programming & audio content from the past five years of MNM. You can re-live interviews with some of your favorite stars & personalities in Ring of Honor today (ROH on HDNet Executive Producer Jim Cornette, ROH President Cary Silkin, ROH World Champion Tyler Black, Austin Aries, “The Fallen Angel” Christopher Daniels, Davey Richards, ROH World Tag Team Champion Claudio Castangoli, & Jerry Lynn), in addition to some of the hottest names in the worlds of sports, entertainment, & Hollywood (Ice-T & Coco, Dennis Rodman, Jim Kelly, Curtis Granderson, Theo Fleury, Michael Buffer, & many more). Hear these interviews & many more right now by logging onto www.MondayNightMayhem.com, and don’t miss all-new episodes of “Your Home Of Wrestling Radio” every Monday evening live at 7PM ET/6PM CT along the airwaves of the Monday Night Mayhem Radio Network!