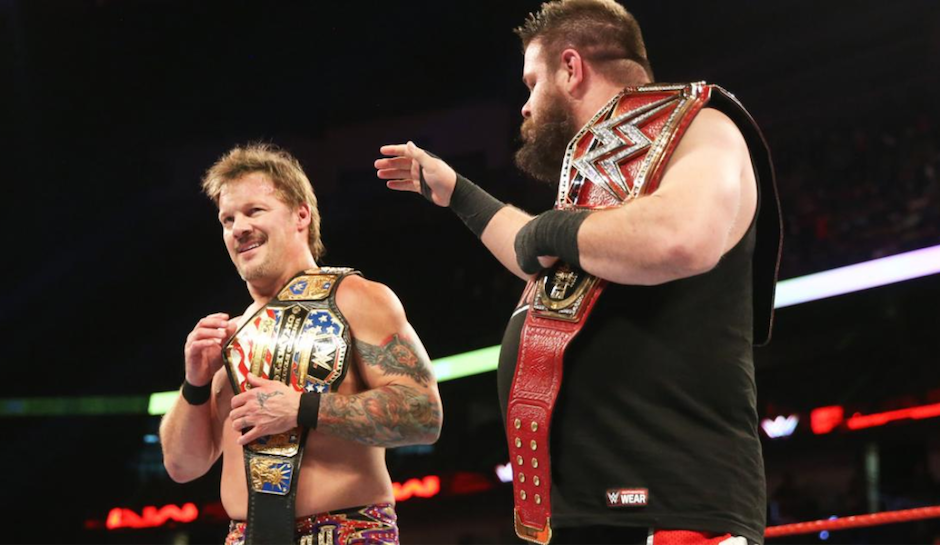 The referee officially begins the match and Owens goes on the attack on Reigns in the corner. Jericho gets the tag and dropkicks Reigns in the back. Jericho drops an elbow over Reigns and then applies a headlock. Reigns tosses Jericho over the top rope. Jericho hangs on, goes up top and Reigns catches Jericho with a right hand on the way down. Reigns with a clothesline to Jericho and then catches him with a jumping clothesline. Owens jumps in and Reigns catches him with a flying clothesline as well. Reigns with a clothesline to Owens in the corner. Reigns eats a boot from Jericho in the corner. Reigns tosses Jericho into Owens and connects with a samoan drop on Jericho. Reigns with repeated clotheslines to Owens in the corner. Owens stops Reigns with a big right. Reigns fires back with a big boot that sends Owens out of the ring. Reigns backs up in the corner as Jericho is getting on his feet. Jericho side steps a Superman, right by Owens from the ring apron and Jericho connects with a Lionsault for a two count. Reigns fights out of a Walls of Jericho, but eats a superkick from Owens. Owens attempts a Pop Up Powerbomb, but Reigns leaps over and catches Jericho with a Superman. Reigns with a Superman on Owens. Jericho avoids a spear with a kick to the face. Reigns counters a Codebreaker attempt. Reigns catches Jericho with a spear. Owens pulls Reigns out during a pinfall attempt. Owens avoids a drive by dropkick and superkicks Reigns in the head. Reigns with a back body drop to Owens on the floor. Reigns with a drive by dropkick catching Owens this time. Jericho goes for a springboard dropkick and Reigns catches him with a Superman. Owens is holding the leg of Reigns as he tries to get in. Jericho with a Codebreaker on Reigns. Owens has Reigns on his shoulders and gives him a powerbomb over the ring apron! Owens and Jericho slide Reigns back in. Jericho is slapping Reigns in the face as Owens throws right hands. Jericho with another Codebreaker on Reigns, Jericho hooks the leg and gets the pinfall.

After the match, Kevin Owens grabs the WWE United States Championship and puts it over the shoulder of Jericho. The show closes with Jericho and Owens celebrating.