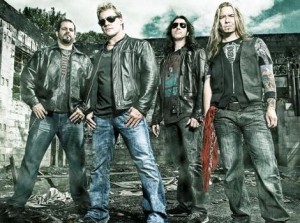 Chris Jericho stated during an interview with iconvsicon.com that “he will be done with the WWE” on August 14 when “Sin and Bones” by Fozzy—his band—is released.

“I came back to the WWE and as of August 14, 2012, when “Sin and Bones” comes out, we go on the road with the Uproar Tour. At that time, I am done with the WWE and it is full-time with Fozzy until the album cycle and touring is done,” he states during an interview promoting the album.

Jericho’s top priority concerns his band, which he hopes is as successful as his wrestling career.

“Like I said, this is something I have been doing since I was 12 years old. It is part of who I am. I think I am very fortunate to have had two dreams that have come true, both of them in these very big ways. Fozzy is slowly catching up to where I am wrestling-wise,” Jericho states. “If I were to retire tomorrow, I would be very happy with all the things we have done as a band. We have worked really hard to get here and have all the pieces of the puzzle there and ready – it has been a whirlwind! I want to continue to build on those achievements!”

Jericho also revealed that he plans to begin working on his third autobiography while touring.

Jericho also revealed that he plans to begin working on his third autobiography while touring: “Rumor has it that I have signed a deal for a third but I haven’t really started working on it yet because I have been pretty busy. However, that is one of the things I start doing when we hit the road with Uproar. You have a lot of time to kill on tour! When you have 30 minutes on stage each night, it leaves you with 23 1/2 hours in between to kill! I am sure there will be a lot of working on the foundation on the book then. It is a long project, writing a book, and like you said, I have been fortunate enough to write two very good ones in the past. I have big shoes to fill or books to write when it comes to this third one! When the time is right, I will get the muse and get the inspiration. I already have more than enough material for the third book, so I think people will dig it when it is ready to go!”

Related Items
← Previous Story What on Earth has happened to the KO and Divas divisions?!
Next Story → The Score’s Arda Ocal talks with WWE legend Sergeant Slaughter