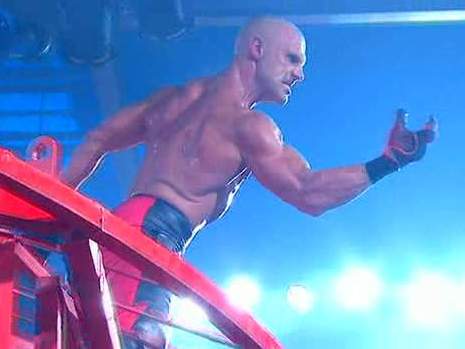 On December 17th, Christopher Daniels will be wrestling ROH student Andy Ridge. Daniels is looking forward to wrestling Ridge. Daniels has not had the opportunity to stop by the ROH wrestling school. Daniels thinks the school gives the students instant credibility.

This Saturday on December 18th, Daniels will be wrestling Homicide live on IPPV at the Final Battle event. Daniels notes that himself and Homicide had a encounters in the early days of ROH but they had plenty in TNA. Daniels thinks it is going to be difficult wrestling Homicide but he feels confident considering he won ROH TV Championship recently.

Jack brings up Daniels ROH TV Championship win which Daniels is very proud. Daniels feels that former champion Eddie Edwards is going to have a very bright future. Jack asks Daniels who he believes will win the Strong vs. Richards match this Saturday. Daniels believes that Richards will come out on top. “Davey by a hair.”

Daniels notes that just because he won the ROH TV Championship doesn’t mean he isn’t interested in going for the ROH World Championship.

Jack asks a question from Roderick Strong who asked “how old is Christopher Daniels?” Daniels laughs and says Strong knows how old Daniels is!

Jason calls in and asks about a four way match at ECWA involving Daniels, Low Ki, American Dragon and Scoot Andrews. Daniels doesn’t believe that match had a great impact on the creation of ROH. Daniels talks about how ROH owners saw a tournament in APW called the King of the Indies. Daniels thinks former Jim Kettner is a genius and has a great eye for talent.

Nikhil calls in and asks what changes Daniels noticed when Hogan and Bischoff came into TNA. Daniels saw different people in creative, and several guys coming into the company. Daniels was one of the guys who had to take a step back. Daniels may have not agreed with the moves but respected it. Nikhil also asks who told Daniels about the release. Daniels didn’t ask for the release and doesn’t want to name names on who called him because that isn’t relevant.

Jack asks how ROH has changed since the last time Daniels was there. Daniels thinks the only change in ROH has been the talent. Daniels says the talent in ROH is very hungry to make a name for themselves.

Jack also asks if Daniels would like to be on the creative side of the wrestling business. Daniels has mixed feelings on that. Daniels thinks he comes up with a good idea once in awhile but greatly respects the guys who have/currently book Ring of Honor.