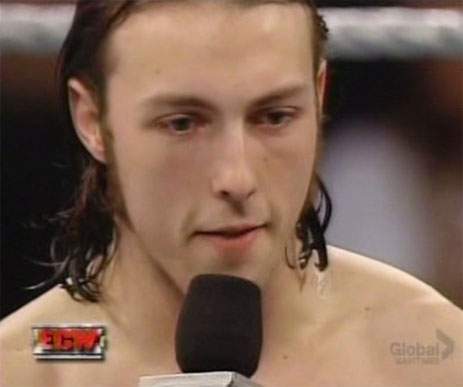 Colin Delaney Interview Recap
By: Bob Colling from from www.pdrwrestling.com

Colin Delaney was the guest on In Your Head Wrestling Radio hosted by Jack E. Jones, Oneinchbiceps and Barbie Richards at www.inyourheadonline.com

Colin and the guys were talking about the KFC Double Down off the air. Colin says that he enjoyed the meal and that it is just meat.

Colin says that every promotion tries to put a show at the Arena and says that the ECW portion of the Arena isn’t really talked about. Colin says that he doesn’t know anything of the three guys he will be facing in the first round of the tournament.

Colin doesn’t get nervous when facing anyone nowadays. Colin is nervous about the possible difficulty to communicate.

Colin says that his WWE run helped him become a better wrestler. Colin doesn’t understand why people say they do not want to go to WWE. Colin says that when you are in WWE you are the best.

Colin hasn’t seen Curry Man in a long time. Colin is excited to see Curry Man compete at the King of Trios. Colin says that people should look out for Team Fist as they won the King of Trios last year. Colin also mentions the BDK as they have been running through Chikara. Colin believes that it will be a interesting tournament with several teams coming from all over the world. Colin says that if you are a wrestling fan this would be easily the best way to spend your money.

Barbie asks Colin about a competition who would freak people out more. Colin chooses Puma over Stigma as he has a weird look in his eyes.

OIB asks a question from the board. The question is about a New York wresting company in Syracuse named 2CW. Colin says that working for 2CW is his second place to work outside of Chikara. Colin puts over 2CW as wanting to make the fans happy and has every working for a common goal. For more information on 2CW, please go to www.2cwwrestling.com

Colin talks about DVD covers for Chikara and how he has only been on ONE cover. Colin says that when his team wins the King of Trios that he will make sure he is featured on all the covers.

A caller named Joel asks Colin if there is anyone on the Chikara roster who would work well for WWE. Colin says that Claudio Castagnoli would be a great fit as he is one of the best wrestlers in the world. Colin likes Fire Ant and Chuck Taylor in the ring. Colin also talks about Eddie Kingston and says that he could listen too him talk all day.

A caller named Gene asks Colin about the angle where Colin would be jobbed to bigger guys. Colin enjoyed the angle and thought it was a great angle. Colin says that his friend nearly pees his pants every time he watches Colin face Big Show on You Tube.
Colin says it was great to work with Tommy Dreamer. Colin says that Dreamer is a bad guy to get on his bad side. Colin says if you call him fat he will get your butt kicked.

Colin has never suffered any major injuries. Colin talks about facing Mike Knox back in England. Colin says that when he took Knox’s finisher he couldn’t move. Colin says that the referee had a concerned look on his face but nothing was serious. Colin says that he was knocked out by the Great Khali with a overhand chop.

Colin wished that he could have worked with the smaller guys on the WWE rosters. Evan Bourne, Brian Kendrick, Paul London and Jimmy Wang Yang were mentioned.

Jack hypes up the King of Trios which will be taking place this weekend starting on April 23rd. For more information please visit: http://www.chikarapro.com

For the full audio of the interview plus the IYH crew’s views on the week in wrestling please visit http://www.inyourheadonline.com !! We also have our complete 5 year archive for FREE downloading including interviews with Colt Cabana, King Kong Bundy, Vince Russo, Harley Race, Bruno Sammartino, Awesome Kong, Desmond Wolfe and many more. Listen live every Wenesday at 8:05 PM EST with upcoming guests including Ryan Shamrock, Chief Jay Strongbow, Bill DeMott, Mr. Wonderful Paul Orndorff and Lex Luger. Also join our free message board http://inyourheadboard.proboards.com/index.cgi to interact with the hosts and fans of IYH and to leave questions for upcoming guests.