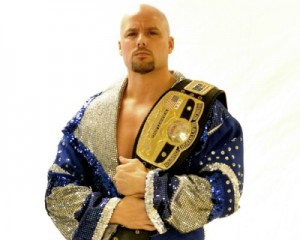 Independent wrestling icons Colt “Boom Boom” Cabana and “Scrap Iron” Adam Pearce have spent the better part of the last two years decimating one another throughout the United States in what many insiders believe is 2012’s professional wrestling Feud of the Year, aptly entitled #7LevelsOfHate.

After losing the legendary NWA World’s Heavyweight Championship to Cabana on two occasions, Pearce laid it all on the line and issued the ultimate challenge to settle this vendetta:  A battle to the bitter end through the ultimate Best-of-Seven series.  #7LevelsOfHate features seven unique and equally brutal stipulation matches in seven different cities.

The premise was simple:  if Pearce were to win he’d get the validation and retribution he craves.  If Cabana were to take the series, Pearce would leave the National Wrestling Alliance FOREVER.  Between the chaos of the matches themselves, the hatred and bloodshed, and the epic storytelling in an era where the steak takes a backseat to the sizzle, #7LevelsOfHate has run through six stages of the series to rave reviews by fans and insiders alike.

As the series is set for the seventh and final war – taking place October 27, 2012 in Melbourne, Australia within a STEEL CAGE – please join us in looking back at Stages One through Three of #7LevelsOfHate.

This fantastic 20:00 feature is the first of a two-part video rewind created by the talented Steve Ward in advance of the October 27, 2012 final war between Cabana and Pearce and chronicles the origins of the series, and every step along the way.  From the confrontations and contract signings, to the matches and mayhem, #7LevelsOfHate Rewind will tell a tale sure to be remembered.

After viewing this video we are convinced that you will come to the same conclusions as fans who have witnessed it live:  Colt Cabana and Adam Pearce have delivered a performance for the ages in this series; giving wrestling fans the world over a true and history-making alternative to the campy foray displayed on mainstream television.  Of this there can be no doubt.