Home / Columns / Column: TNA vs. WWE Supercard: Could it happen?

Column: TNA vs. WWE Supercard: Could it happen? 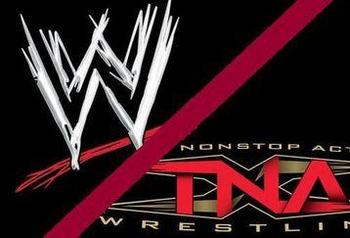 TNA vs. WWE Supercard: Could it happen?

by Tom G of Gerweck.net

Growing up, one of my favorite wrestling magazines was “Wrestling Superstars.” Looking back there isn’t much I can tell you about the difference between the so-called “Apter mags,” however “Superstars” standsout because 1) it didn’t come out every month (which made it seem more special) and 2) each issue featured a “dream match,” a special article where one of the writer’s would tell and imaginary tale (well, perhaps the entire magazine was imaginary) that most often set-up a match between stars of two different promotions. Seeing that there has been some talk of a TNA vs. WWE Supercard (by TNA folks, and less likely to happen then Undertaker losing at Wrestlemania) I’ve decided to present my scenario for how such an event might take place.

So, suspend reality and witness how a TNA vs. WWE Supercard would come to be…

Following the destructive tornadoes hitting Oklahoma and the surrounding area, TNA President Dixie Carter takes to Twitter suggesting a wrestling mega-show to help raise funds for the suffering families. Always the risk-taker, Carter calls-out WWE Chairman Vince McMahon to join in the cause. Internally, McMahon thinks TNA isn’t needed for this supercard to take place, and ignores the tweets.

The problem is, though, fans take to social media and craving something different, start a campaign of their own promising $10 a pop to charity should the event take place. This campaign goes viral, and before long TNA has McMahon backed in a corner. Little more than a day after Carter issued the challenge, McMahon relents and agrees to negotiate with TNA for a one-time-only interpromotional Supercard.

(Now we must continue to suspend reality and imagine TNA and WWE meet with their lawyers, Spike and USA agree to simulcast the event commercial-free, the Chesapeake Energy Arena is available for the event and a special booking committee is put in place to prevent either organization from looking too dominant at the event.)

After intense, yet fast, negotiations, Carter and McMahon appear side-by-side and announce that the special supercard will take place in Oklahoma City. There will be 10 matches and the three-hour event will air live on both Spike and USA. Families devastated by the tornadoes will be invited to attend for free. A special 800-number and website is created for fans to donate that $10 they promised. TNA and WWE pledge all profits will go to the families and areas affected. Vince even comments that Dixie has bigger grapefruits than Ted Turner ever did to pull this event off.

The show opens with Josh Mathews and Todd Keneley welcoming the viewers and telling them how to contribute to the cause. They run down the 800-number and website, including how to order specialmerchandise from this event, before sending it down to the broadcast team for the first half of the show, Michael Cole and Taz.

Cole and Taz welcome the viewers, too, and note how it’s good to be back together. Taz makes a crack about who’ll be yelling in his ear tonight and we go to the ring for our ring announcer for the night Lilian Garcia.

A Divas/Knockouts match starts the show in typical fashion as it doesn’t take long for all the ladies to enter the ring at once. As things get out of hand, James is able to get the upperhand on Brie Bella andscores the pin at 5:46.

We head backstage where Matt Striker is standing with TNA General Manager Hulk Hogan, Raw Supervising Manager Vickie Guerrero and Smackdown General Manager Booker T. The three debate which match will steal the show and agree to each donate $100,000.

With Sin Cara critics always en masse, fans are pleasantly surprised at what becomes a highlight reel match seeing Sabin and Sin Cara go toe-to-toe for more than 15 minutes. Taz proclaims this is “vintage Sabin” and the TNA star takes the pin victory at 16:02.

At the top of the entrance ramp Mathews and Keneley are back to update the crowd on the amount of donations brought in so far. Behind them, on the TitanTron, Ric Flair appears and promises to make a champion-sized donation.

Before the match can begin, Smackdown Assistant General Manager Teddy Long comes to the ramp and says this match must be no-disqualification! Cole and Taz sell the announcement and away we go! Kane and Abyss battle in the ring and up and down the ramp, with cameos by Aces & Eights and The Shield. The match is brutal, with Kane upsetting Abyss at 9:21.

Before the ring area clears, though, Hogan comes out and declares The Shield and Aces & Eights will meet now that they’ve interrupted the previous match.

The two teams immediately start to brawl and the referee is never able to gain control. A double-DQ is called at 1:34.

A special video is aired showing both TNA and WWE stars helping families devastated by the tornadoes.

With each match a surprise, the crowd erupts for what promises to be a show-stealing match. This bout doesn’t disappoint, as the four take turns showing their dominance and hearing the cheers of the crowd. At 20:00 the bell sounds as the time limit has expired. The crowd reacts with chants of “let them wrestle” which brings Booker T out to the stage, declaring the match continue for another 10 minutes. Ten minutes is not enough though, as there is still no winner. Booker comes back out and tells the crowd the match must end in a draw. The fans yell in disappointment until Booker and the match’s participants all do the spinarooni to end the first half of the event.

Back to Mathews and Keneley who once again update the total of donations. They show another brief video and then send it down to our broadcasters for the second half of the show: Jim Ross, Mike Tenay and Jerry Lawler.

The crowd chants “J.R.” as the trio introduce themselves and promise the viewers they are in for some real treats for the rest of the program.

JR declares this a slobberknocker as the King asks Tenay if he is JR’s father. It’s TNA vs. WWE to start the battle royal. The bodies fly fast until we reach our final four: James Storm, Jeff Hardy, Ryback and Fandango. Hardy and Fandango eliminate each other allowing Ryback to surprise Storm and take the win at 6:29.

We again head backstage where Christy Hemme interviews TNA Champ Bully Ray. The champ talks about being dominant in both organizations until WWE Champ John Cena enters the picture and challenges Bully Ray to a champ vs. champ match in the main event!

Morgan attempts to overpower Orton most of the match, and is successful until the Big Show comes out and starts taunting both competitors, angry he doesn’t have a match on the card. Morgan becomes the most distracted and at 10:04 Orton RKO’s Morgan to take the win.

The TitanTron comes alive as World Champ Dolph Ziggler appears to express his support for the event and disappointment because his concussion is preventing him from being there live.

As Swagger heads to the ring Zeb Colter cuts a promo on how you can’t trust a grown man who wears makeup to the ring. JR details his history in calling Sting matches. Sting comes out to an enormous ovation. Momentum stays on Sting’s side for the entire match, seeing the TNA Hall-of-Famer roll Swagger up at 5:47 in a surprisingly entertaining match.

Once again we head to Mathews and Keneley who provide their final report for the night. Then it is backstage where Matt Striker joins us again with the general managers once again as they sum up how the evening has been going so far.

Before the match begins, special referee Roddy Piper is introduced to a wild eruption. Piper and Aries begin jawing at one another while the others watch. Roode finally goes after Magnus and soon everyone is going at it, including Piper. The match finally gets under control for a few minutes. Piper, still intent on making Aries miserable, does a fast count as Joe pins Aries at 6:40.

The announce team catch their breath and once again tell us we are watching history as it happens. Vince McMahon and Dixie Carter then come out on the ramp and thank the crowd and announce they will both sit ringside to ensure nothing goes wrong during the champ vs. champ match.

The King has fun saying Bubba Bully throughout the match that is hardly scientific. Cena and Ray brawl for the majority of the match until Dolph Ziggler’s music hits! Zigger and AJ Lee head to the ring. AJ sits on Dixie’s lap! The King says Dixie has quite the history messing with people named “AJ.” This prompts Devon to rush out and keep watch on Vince. Ziggler grabs the mic proclaiming him the real champ and then enters the ring with a chair. The ref throws the match out at 12:32 thus prompting both locker rooms to empty and brawl throughout the entire arena. The event ends as McMahon and Carter shout at one another in front of the announcer’s table.

Epilogue: I get it, the matches aren’t all dream matches, but if suspending reality and trying to stay as close to reality as possible at the same time isn’t hard enough, it is important to consider a co-promotion like this wouldn’t be filled with every match we’d like to see. You’d have to expect a fair share of inconclusive finishes to make both companies happy.