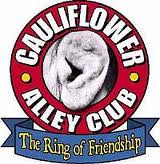 The 2013 Cauliflower Alley Club reunion takes place next week in Las Vegas, NV, April 15-17, 2013.  Here are the honorees being recognized by the club during the reunion.

PS – These are not the only ones to be honored in 2013! The CAC has withheld a few surprises to make this a exciting reunion!

Go to the CAC website for more reunion details: http://www.caulifloweralleyclub.org/

Related ItemsCAC
← Previous Story SBI Bookings news and notes: April 10, 2013
Next Story → AS I SEE IT: Sputnik Monroe and racism in the American South