When we reached out to the internet wrestling community for messages of condolences for the Eddie Fatu tribute we were overwhelmed with some fantastic emails and voice messages. Due to time restrictions, we were unable to read out all of the emails on air, so we decided to put all of the message of condolences on display for all to read

A little over a year ago we lost your mom, my grandma, Elevera and you assisted us all in a much better healing process then doing it on our own. As your one of your oldest neices I have always looked up to you for guidance. You have struggled from the ghettos of San Francisco and aimed straight for success in the wrestling business. I will never forget what you encouraged us as we sat in your suite practicing for grandma’s funeral and you looked at all your neices and nephews and said, “It feels so good to walk into a building and have the ability to get whatever I want. You all need to strive in life to succeed and make a better path for yourselves.” I literally took that to heart and will never take life for granted. I miss you so much! I miss you trying to take Hope as your daughter because you have four wonderful boys and wanted to spoil a girl as well. I miss your smile and presence. You will ALWAYS be missed. I love you forever until never.

This is Eddie/Umaga’s debut match in front of people and very poignant since I just found the series. He’s in the center and I’d covered his entire career back east on some Jersey Afa indie shows on thru his incarnations in WWE(Jamal to Umaga). Just unbelievable someone so young and talented, and a funny person as himself has been taken from us. I’ll never forget-Rikishi was doing a signing at a NorCal Popeye’s fried chicken restaurant and I posed he and Eddie hamming it up behind the counter, in their gear, pretending to own the place. I’d just tell Eddie what I needed and he’d make sure the photos of himself were perfect. Had talked to him recently and he said his health was great and he’d been trying to drop some weight. Never got an answer on the possibility of him finally or possibly getting a chance to work with Samoa Joe in TNA–we’ll never forget the boys rib on him when he fell asleep without his shirt, and they inked on the words “Joe” under his chest “Samoa” tat. 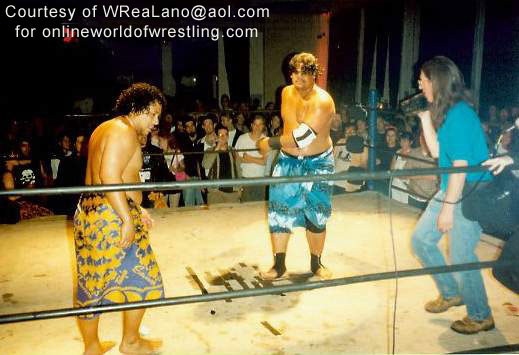 Dr Mike Lano, Wrestling’s Photojournalist Since 1966 and a friend of the wonderful Anoia family.
RIP and we miss you Rodney(Yokozuna) and Gary Albright terribly

Eddie and Mattie were the most popular tag team ever on my roster, and it is such a tragic thing for someone so talented and with yet so much more to accomplish had to be taken so very young. I don’t believe I have ever worked with an athlete so light on their feet while being so big, Eki’s agility was outstanding.

I would call, but I don’t really have a phone, so I guess this is the best I can do at the time.

Eddie was one of my favorite wrestlers of the past decade, a great big man in wrestling. he was agile, extremely powerful, high impact, and very entertaining to watch. i never really got to see his run as jamal in 3 minute warning, but i actually was watching raw when he debutedas umaga, and ever since i’ve been nothing but impressed with his work and the character he portrayed.

i was never bored with his in-ring work, and that isn’t usually the case, even with a lot of my other favorite wrestlers. his style was unique, even though the wwe gave him the typical samoan savage gimmick…he brought something more to the table. he even added a new spin of the samoan drop, which is my favorite version. the most brutal that i’ve ever seen in the ring. i couldn’t imagine a man his size tossing me into the air, catching me on his shoulders as i fell, then landing his entire weight on me….that would suck.

it really hit me hard when i found out he died. i don’t really know why it hit me as hard as it did, but i was already a little depressed that day, it was the two year anniversary of my momma’s death. as i wrote on the thread started, i’m doing a tribute drawing over the holidays of him as umaga. its going to be pretty good sized, and it might be a while before i get done with it (i have to wait for my fall quarter to end at school so i have time to work on it), but i still plan on getting it done, at the very least by christmas. if anybody has any really good pictures of him in character, please, don’t hesitate to send that to me on the site.

i’m also thinking about sending the finished work to his family…i know that some people on the site have some wrestling connections, and could probably help me out…i know a drawing isn’t much, but thats what i do best.

in honor of the late, great, Eddie “Umaga” Fatu.
thank you so very much for the great years of wrestling that you’ve given your fans.
i’m not religious, but i’ll pray for your family. you passed too soon.
thank you.

Such a terrible loss for the wrestling world. Eddie Fatu was a great wrestler for his size, it’s a shame that he never became a world champion. My thoughts go out to his family and loved ones.

I am shocked and sadden to learn of the death of Eddie Fatu, a.k.a. Umaga. I had the opportunity to see him at a live WWE event in London, England and he was one of the most agile wrestlers for his size out there. He had an amazing tenure with World Wrestling Entertainment and carved out a memorable gimmick that will not soon be forgotten. My sincere condolences to his family and friends. R.I.P.

I want to take this time and send my condolences to the passing of Eddie Fatu. While I did not know him on a personal level, I was a big fan. My best memory was the weekend of the first Wrestlereunion convention where I got to talk to him over that weekend. To his family: I know at this time, nothing will take away the pain you feel but try to remember he is in the greatest place of all. He is with our precious savior Jesus Christ. The wrestling ring in the sky just got another great human being. All of you are truly in my prayers.

Love and comfort in HIM,
Tim Winters