Home / Behind the Scenes / Congratulations to Pepper Martin! 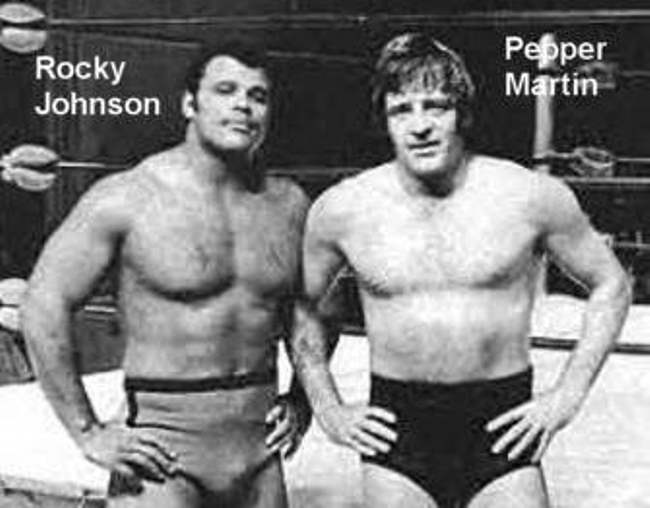 The Cauliflower Alley Club is pleased to announce that Howard “Pepper” Martin will be honored at the upcoming CAC Reunion with the 2016 REEL Award!

Biography courtesy of Wikipedia.com: Born in Hamilton, Ontario on September 20, 1936, Howard Martin lied about his age and joined the Navy at only 16. “I was a big kid for my age”, Martin explained in an interview. Playing football for the Navy, he tore his knee out in his second year and had to have cartilage removed. “Then they found out how old I really was and kicked me out”, Pepper stated. Pepper had been dating his future wife already and they were married July 21, 1956, eventually producing two daughters and four grandchildren.

He took a job at Westinghouse in Hamilton, and a chance to play with the Hamilton Tigers football club came up. Needing to get in better shape, and rehab his knee, a friend directed Martin to a gym run by Al Spittles. The gym happened to be where local wrestlers trained and Pepper soon fell in with them, learning the sport and debuting some time in 1957. In his first match, he teamed with Bolus against Johnny Evans (later Reggie Love) and Bull Johnson (father of “Bullwhip” Danny Johnson). Martin would live out of Windsor as he traveled the Detroit territory. He would leave for the Tennessee are and quickly return to Detroit, before going to work for Jim Barnett’s Indianapolis territory, which had just opened in 1959. Even though he was still a preliminary wrestler, Pepper began making real money at this point, sometimes over $1,000 a night in the big arenas.

Martin moved his family to the States to work for Leroy McGuirk‘s Tulsa, Oklahoma office in the 1960s and soon made good friends with his future tag partner and ring general, Al Lovelock. They worked out of New Orleans for a year; Pepper described the travel as “horrendous”. They eventually made their way to Texas, where Pepper was stabbed by a fan. Returning home to Ontario to recoup, he later returned to Texas, but this time as a babyface (wrestling jargon for “good guy”). Over the next couple of years he would work in Minneapolis, Vancouver, and St. Louis before getting a phone call from Roy Shire, the promoter out of San Francisco. It was the call that would change his life by bringing him to the West Coast and his future on the silver screen.

One weekend while wrestling in between San Francisco and Los Angeles, wrestler-turned-actor Woody Strode to Pepper to Hollywood for a late night romp. They ended up waking director John Ford up at three in the morning, being ejected from his lawn and then drinking until eight o’clock with Hollywood tough guy Lee Marvin. Pepper would later befriend John Ford and even spend Sundays swimming at his house. It was also while working in Los Angeles that wrestling legend Freddie Blassie would give Martin the chance to commentate the matches with Dick Lane, something that he attributes to helping him in his future acting career. Then disaster struck Martin’s life.

During a 1962 match in Long Beach, Martin broke his back. The doctor discovered a small vertical crack in his spine, but denying surgery, Martin had a palette made up that he would lie on for the next six weeks to keep his back straight and allow it to heal. Come June of 1962, he was better and intending to return to Canada when Dick Beyer, who had worked as The Destroyer, suggested he go to the Pacific Northwest territory where a babyface was needed. Talking on the phone to promoter Don Owen (who was the first to ever put professional wrestling on television), Pepper decided to get outrageous with his pay, saying he’d do it for 10% of the gate. “I’ll stay six weeks. If I get over, I’ll stay. If I don’t get over, that’s my notice, and I want ten percent”. Owen agreed, and what followed was the most successful run of Pepper Martin’s wrestling career.

In the NWA Pacific Northwest territory, Pepper would not only become a multiple time champion, but would also continue in his role as commentator, calling matches in Portland, Seattle, Tacoma and Eugene. Pepper would have an incredible year and a half long feud with Hall of Fame inductee Pat Patterson, exchanging the NWA Pacific Northwest Heavyweight Title back and forth dozens of times. “Pat and I laughed about this the last time we were together – something like 28 times,” Martin laughs, referencing many undocumented title switches. Officially, Martin was an NWA Pacific Northwest Heavyweight Champion five times, exchanging the title with other wrestling legends Stan Stasiak, Mad Dog Vachon, Paul Jones, Tony Borne and the aforementioned Patterson. Martin also became an eight time NWA Pacific Northwest Tag Team Champion with Shag Thomas (4x), Luther Lindsay (2x), Paul Jones and Billy White Wolf.

Martin’s first feature film was the 1968 film Angels from Hell. He also appeared in Walking Tall (1973), The Longest Yard (1974), Live A Little, Steal A Lot (1975), the slasher Scream (1981) and the horror comedy Return to Horror High (1987). However Martin is probably best known for his role as the truck driver, Rocky, in the 1981 sequel Superman II. Martin’s TV appearances include Police Woman, The Mod Squad, I Dream of Jeannie, The Incredible Hulk and The Rockford Files.

Congratulations again to Pepper Martin, the 2016 recipient of the REEL Award!