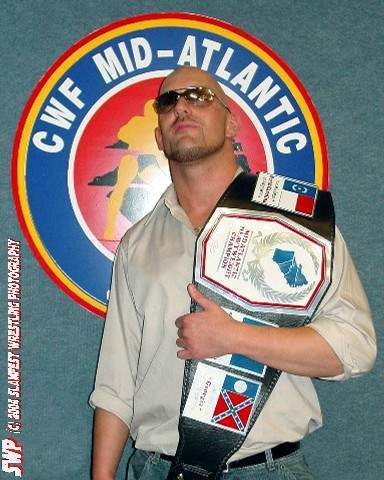 * The Match 8-Months in the making! Converse vs. Silvia: One-on-One for the Mid-Atlantic Heavyweight Title!

CWF Mid-Atlantic returns to the Carolina Sports Arena in Burlington, NC this Saturday, August 11th, with a 7:30pm belltime. This is a full card of great action all taped for television!

The match Commissioner Ty Dillinger said would never happen. The match he has done everything in his power to prevent since capturing control of the commissionership of CWF Mid-Atlantic. William L. Cross managed to trick Dillinger into signing for the title bout last month and it will finally happen this Saturday night!

In addition to finally getting a title shot, Converse will have William L. Cross in his corner for this long awaiting championship bout. The champion, Joey Silvia, will of course have his manager in his corner, Commissioner Ty Dillinger.

Dillinger, still livid about how Cross orchestrated this match, provided us with some pointed comments. “I want all those fans and especially Cross to know that Joey Silvia is more than ready for his title defense. It wasn’t us that was ducking Converse, it was ConverseÂ that was scared to face Silvia. And now that it’s finally happening, you better believe that there is no way we are losing this match.”

Commissioner Dillinger continued, “Joey is at the top of his game.
He’s been the Mid-Atlantic Heavyweight Champion for almost a whole
year now. He will become the longest reigning champion of all time
and to do so he’s going to do something that only Steve Corino has
done. And that is to beat Ric Converse in Burlington. And once we
do, Converse, Cross, and the whole world can bow down to the real deal
Ty Dillinger and Joey Silvia!”

Saturday’s main event will be worth more than the price of admission
by itself, but more big matches and one surprise announcement is also
slated to happen. Three quarterfinal matches of the 2007 Johnny
Weaver Cup Tournament will also take place, featuring the three
previous winners.

The 2004 winner, “Dangerous E” Corey Edsel will take on Brass Munkey.
The 2005 winner, Jesse Ortega battles Alex Adonis. And the 2006
winner, Gemini Kid will square off with Mitch Connor. The winners of
these three bouts will advance to join Joey Siliva in the Final Four
to be held on August 25th. Those four will fight it out in front of
the legendary Johnny Weaver, who will award the championship trophy to
the winner that night.

Also on tap is a huge surprise announcement by the Gemini Kid. Gemini
has text messaged us while on vacation at his beach house in Panama
City Beach, Florida, to remind us about it.

His message reads, “I laid the Kamakazi Kid to rest in the Prison
Yard. But this Saturday night I am going to resurrect him from the
grave for one night only. Fans of Kazi better not miss this one. It
will be the last time you ever see him again!”

As strange as it sounds, Commissioner Dillinger ordered us to include
the message from Gemini Kid. Will Kazi return this Saturday night?

All this and so much more including all your favorites at the Carolina
Sports Arena this Saturday night!

The CWF returns to live action on Saturday, August 11th, at the
air conditioned & heated Carolina Sports Arena, in Burlington, NC!
This is a special TV Taping event with a full card of action!