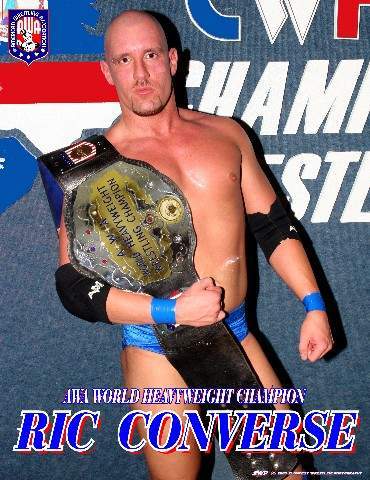 5. Rising Generation League Champion Roy Wilkins vs. “Jersey” Nick
Richards ruled a NO CONTEST after Ric Converse entered the ring with a
steel chair and wiped out both competitors and the referee (7:07)

7. Tank Lawson vs. Rob “Boogie Woogie Man” McBride ruled a draw as the
time limit expired in Anything Goes action (20:00)

Notes:
“The 1st” Ric Converse ripped through the front door of the Carolina
Sports Arena shortly after intermission, grabbed a steel chair and
wiped out both competitors in the RGL Title bout, champion Roy “Rage”
Wilkins and challenger “Jersey” Nick Richards. Converse then turned
and floored the referee and took a big swipe at former CWF
Commissioner William L. Cross, who rushed to the arena at the urging
of Xsiris. On Friday night, Ty Dillinger set up Converse’s brother
Joe, setting him up for an attack by “Infamous Icon” Joey Silvia &
“Simply” Steve Greene which resulted in a broken arm and an overnight
stay in the hospital. Garry “Madd Trucker” Stevens entered the ring
following Ric Converse’s statement that the show was over, sitting in
a steel chair with bodies piled up around him in the center of the
ring. Stevens stated that he could go beat up Destiny by his self or
he could do it with Converse’s help. Converse, still holding a steel
chair, dropped it and stared down the Trucker. As they both headed
toward the ropes, still staring each other down, they did the one
thing that no one in Burlington NC could have expected, they shook
hands and left the building together!

Former Mid-Atlantic Tag Team Champions Rob “Boogie Woogie Man” McBride
and Tank Lawson were ordered to battle each other in the main event
for the amusement of “Commissioner for the Night” Michael McAllister.
The bout started off as pure comedy with both men getting in ribs on
the other and then turned serious as they finally started taking out
their frustrations on each other from the pressure of holding the Mid
Atlantic Tag Titles for the longest single reign in history. The
brutal match ended with the bell signifying the time limit and both
men shook hands and left the ring as a still-cohesive unit with new
life. McAllister was unhappy that the two still were friends and
ordered them to continue to fight until someone was left laying in the
ring. Boogie & Tank then dropped McAllister with a tag team
combination move that left McAllister out cold in the ring as the duo
was cheered by the fans.

CWF Mid-Atlantic returns to action on Saturday September 29th at
Greensboro NC’s AC Fitness Center for the Lethal Lottery! 8 teams
will be drawn at random to face each other. The four winning teams
will advance to the main event “Battle Bowl” with the final winner
earning the last entry into the 7th Annual CWF Rumble to be held on
October 6th.

The CWF returns to live action on Saturday, October 6th, at the
air conditioned & heated Carolina Sports Arena, in Burlington, NC!
This is the 7th Annual CWF Rumble! 30 Men will enter the ring but
only 1 will survive to earn a shot at the title of their choice!