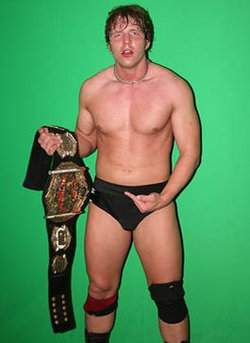 Jack and OIB are joined by Jon Moxley for the second time, formerly of DragonGate USA and now wrestling with CZW, for a one hour interview.  Jon Moxley will defend the CZW world title against Rob Ego Anthony at CZW 12th anniversary event February 12th at The Asylum Arena (formerly the ECW Arena) in Philadelphia, PA. For tickets and info, check out http://www.czwwrestling.com

Jon’s thoughts on his opponent is that he is hot and doesn’t plan on giving up his belt anytime soon by whooping his ass.  Jon feels accomplished to hold the belt, even though it’s just another belt. Jon feels accomplished that after one year of hard work, Jon has risen to the top of the company. Jon is aware of the history of the company and the arena, and never had any notion of working for CZW initially, but has thought of working for the company as a “perfect marriage”. Growing up, Jon was an ECW fan from Cincinnati, OH, so working in the same building as the ECW has a certain luster to it.

BJ comes on the line to ask Jon a question. BJ asks Jon what is the meaning of life. Jon is stumped by the question, and if Jon knew, Jon wouldn’t be wrestling. BJ tells Jon that BJ’s family enjoyed the show 2 weeks prior in Philly. BJ also compared Jon to Randy Orton of WWE and how Randy Orton wants to be Jon Moxley. Jon promotes the next show, and mistakenly says the dates of the next show as February 5th, not February 12th.

Jon and Jack get to talking about the Moxley t-shirts Jon sells at the CZW shows.

Jack asks Jon about the craziest thing a fan has ever brought to a wrestling match Jon participated in. Jon states he has seen bats, items with thumb tacks, old gaming systems such as a Playstation and Sega Gensis, and cheese logs. Jon cannot recall all the crazy things he has seen fans bring.

NoOneSpecial calls in. NOS asks about the Tournament of Death that Jon participated in. NOS asks about the preparation involved in that match. Jon wrestled Brain Damage in a match. Jon loved that match and got a sort of high from the match. The promoter for Tournament of Death came up to Jon after the match from Brain Damage and offered Jon a spot in the Tournament of Death. Jon felt he just needed to mentally commit and jump in with both feet.  Jack asks NOS what his favorite Moxley moment is. NOS responds that its Jon’s body of work and the promo Jon did recently against Homicide.  NOS also asks Jon about the Drinking Death match Jon participated in. Jon responds that the match was in front of 25 people in the middle of BFE Illinois. The match was in front of students and volunteers. Jon used his gimmick of being drunk already at the start of the match and how the match was supposed to be quick. The promoter asked Jon to already be piss drunk, do an airplane spin move, fall to the ground and have Jon’s opponent pin him. Jack thanks NOS for calling in.

Jack takes a call from Reggie. Reggie states that he like Jon’s matches from DragonGate USA and other former promotions. Reggie states Jon is his idol and that he loves indy wrestling. Reggie asks Jon if Reggie has ever heard of him on Facebook or YouTube. Jon states he has never heard of Reggie.  Reggie states the sites Reggie has been on and that Jon should check him out. Jon realizes that he has misstated the 12th anniversary show with CZW and the wrestling show Jon is doing on February 5th in New Jersey.

Incher takes some questions from the board. Optimus Lime asks Jon if he thinks Misitifo is hot or not. Jon replies that he thinks Misfitio is hot and is the total package. Optimus also asks about Nic Cage and getting Jon to robbing a bank. Jon has never wanted to rob a bank. Jon thinks Optimus asks weird questions.

Jack asks Jon about how CZW has changed since Jon joined a year ago. Jon replies that there has been several ownership and booker changes. Jon has just been rolling with the changes and enjoying a new period of stability. Jon is happy with the direction the company is going looking in to the future.

Jack takes a call from Tommy in the 443 who chants the Mox Mox Mox over and states that the Bengals suck and that the Ravens rule. Tommy enjoyed a match where Jon was slamming chairs after a match. Tommy also encourages Jon to take on Homicide and that Jon’s face is currently messed up from the last beating from Homicide. Jon states if Homicide tries to cut his tongue off, he will still talk shit in other forms of communication.  Jack thanks Tommy calls in.

OIB states how Jon shouldn’t use twizzers in his nose since it’s so close to his brain and how the Ancient Egyptians use to remove brains for mummification.

Jack takes a call from Josh in the 757 area code. Josh asks about the Tournament of Death match with Nic Cage.  Jon states he was just there to help Nic, but otherwise his memory of the event is kind of fuzzy. Jon does recall that the fans and wrestlers were freaking out during the event.  Jon states in a matter of seconds he went from being backstage to being in the ring wrestling and the ensuing chaos that happened. Jon still has scars from the glass cuts he received from that match.  Jon puts to rest the Shaun of the Dead incident with a skillsaw. Jon states that the skillsaw was actually soft as a babies butt and as fake as fake can be. Jon states anyone who thought it was real, Jon thinks those people are dumbasses.

Jack takes a call from Joao in Portugal. Joao states he follows CZW from the internet and asks about Botchamania. Jon raves that he would love to be on any Botchamania DVD and if there are any spots from Jon or CZW on Botchamania, it’s because of the style of wrestling is more hardcore then most other promotions out there. Jon asks Joao if Joao is from Portugal in Europe or Portugal, New Jersey. Joao states he is from the actual country. Jon praises Joao and is amazed there is indy wrestling fans in places other than the United States. Joao asks Jon about hardcore fans and if those fans are harder to please then the typical WWE or TNA fans. Jon states that those fans are harder to please because they have seen everything and want more.  The level of hardcore also depends on the area he is wrestling in and can get the same reaction in one area where a guy gets hit with a pie pan and another area where the level of violence takes baseball bats.

Jack takes one last call from Duane.  Duane asks Jon about a gimmick Jon has about being a heel that follows the rules. Jon states it wasn’t his idea and that those times were against Homicide mostly. Jon states the concept has evolved and the gimmick has taken on a life of its own. Jon enjoys the rivalry with Homicide.

Jack asks about the I Quit match when Jon was with DragonGate USA. Jack stated he loved the match and that Jacks brother even got blood squirted on him from that match. Jack asks Jon if Jon ever reviews his past promos to improve current promos Jon is working on. Jon states he does review them from time to time but is annoyed from hearing himself talk. Jon states that when he does review those promos, he wished that he had done things differently.

Jack plugs the 12th anniversary show for CZW on February 12th at the Asylum Arena. Jon plugs the show. Jon also plugs DragonGate USA again and the current Pay Per View that occurred recently. Jack thanks Jon for coming on and the show went to break.

For the full audio please visit www.inyourheadonline.com plus live every Wednesday at 8:05 PM EST. Upcoming gugests include Wildcat Chris Harris, Paul Bearer, George South and many others.