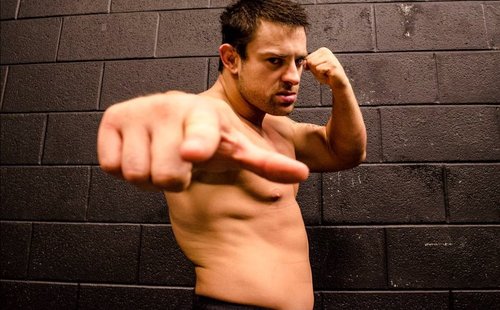 Davey Richards stopped by Under the Mat Radio to discuss his feelings on a few topics such as Dixie Carter, return of the 6 sided ring, his tag partner Eddie Edwards and so much more! You can listen to the full interview below; here are some of the highlights:

Davey on the return of the 6 sided ring:

“Well it gives TNA their own personality and it’s unique to them. It takes a little bit to get used to…having two more sides and it can make things more confusing at the end of the day you still got to get the job done so I’m fine with it. ”

Davey on what his goal is right now in TNA:

“Just me and Eddie (Edwards) making a mark as one of the greatest tag teams in TNA history. There’s the Hardy Boys who’s back together and Team 3D is back together…there’s always Beer Money who could get back together. We want to test ourselves with those guys and leave our mark in TNA.”

Davey on his thoughts on the tryout with WWE (with Eddie Edwards):

“We did a one week tryout for them and that was about it. It’s not somewhere where I longed to work for their travel schedule doesn’t work for me. I’m not moving down there and getting trained how to wrestle again I’ve already been trained and if I don’t’ have it now then I won’t have it.”

Davey also discusses what he does in his spare time, his background in kickboxing, working with Special Olympic kids and much more in this exclusive 60-minute interview on Under the Mat Radio.

Related ItemsDavey Richardstna
← Previous Story Rob Van Dam talks about helping young stars get over
Next Story → Does Jon Jones get the respect he deserves?