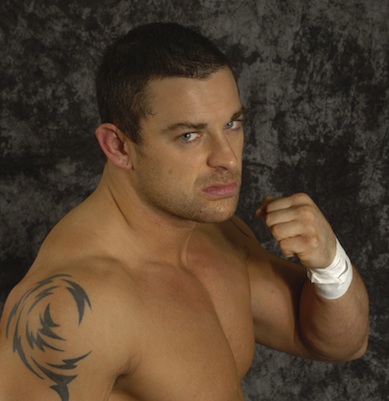 Davey Richards: Much more than meets the eye
By Randy Cauthron

When it comes to rings — Davey Richards was scheduled to place one on his fiancee’s finger. Plans changed. Now he will be competing for Spencer-area wrestling fans.

He was supposed to be getting married Sunday. Instead, he will be exchanging punches, kicks and high flying maneuvers with a couple of Jersey boys.

“She’s so understanding,” Richards said, acknowledging it takes a special woman to be his wife. “But when the company schedules you, she knows I need to be there.”

Davey Richards and his partner, Eddie Edwards, known in TNA wrestling circles as The Wolves will be in action at the Clay County Regional Events Center attempting to regain the tag team title belts from the current world champions.

There’s much more than meets the eye to this wrestler who emerged on the TNA scene a couple of months ago with Edwards.

In addition to his wrestling responsibilities, Richards is also an active paramedic and is pursuing a medical degree.

The Othello, Wash., native is a paramedic in St. Louis, Mo., during the week; flies to Universal Studios Orlando to tape the “TNA Impact” program for Spike TV; and travels on tour for house shows as scheduled.

But the busy schedule doesn’t allow for a great deal of sleep.

“It’s a needed commodity, but I’m not getting much at this point.”

Growing up in a small farm community as Wesley David Richards, he credited his grandfather for his ring name.

“I had one of those hats like Davey Crockett growing up. Grandpa always called me ‘Davey Boy.’ He was a big influence on my life and passed away early in my pro wrestling career. I use the name because it helps keep me grounded regardless of how big this wrestling thing gets.”

Richards wrestled in high school and at the college level. While considering his options and while weighing his pursuit of a medical degree, he reconnected with pro wrestling, a sport he had enjoyed when he was younger.

“I was looking for something to do and after watching some wrestling, I thought, ‘I could do that.'”

With that as his motivation, he packed his bags, left his familiar surroundings and headed to a wrestling school in Atlanta, Ga.

What Richards soon learned is that the word “choreographed” is not synonymous with “pain free.”

“I found that out the hard way … The attitude many amateur wrestlers have is, ‘Hey we’re the real stuff, this fake stuff is going to be easy,'” Richards said. “I had a bit of that attitude, but I’ll tell you, I’ve been far more torn up in professional wrestling.”