David Benoit Attends WWE Event After Saying He Was Banned

Chris Benoit’s 26 year old son David Benoit recently appeared on the “Pro and Bro Wrestling Podcast” and stated that he was no longer allowed backstage at WWE events. (H/T to Pro Wrestling Sheet) It was speculated that Benoit’s ban may have been handed down after he was photographed wearing an AEW jacket while backstage at a WWE live event back in March.

In an update, it looks like the younger Benoit may have been wrong about the WWE ban as he was backstage at a WWE live event in Edmonton, Alberta, Canada this past weekend. Natalya tweeted the photo seen below with David, Tyson Kidd and Cesaro.

For what it’s worth, the interview with Benoit was published earlier this month, almost two full weeks before he attended the weekend live event.

David, who is close with AEW World Champion Chris Jericho, also revealed that he attended AEW Double Or Nothing and All Out earlier this year. He also talked about wanting to join AEW.

“I’m just messing around in the ring right now with a couple of guys from AEW,” David said. He continued, “I want to go to AEW one hundred percent. I love AEW. I love what they do for the boys. Take care of them.”

Below is the photo of Natalya, Benoit, Kidd and Cesaro in Edmonton this weekend: 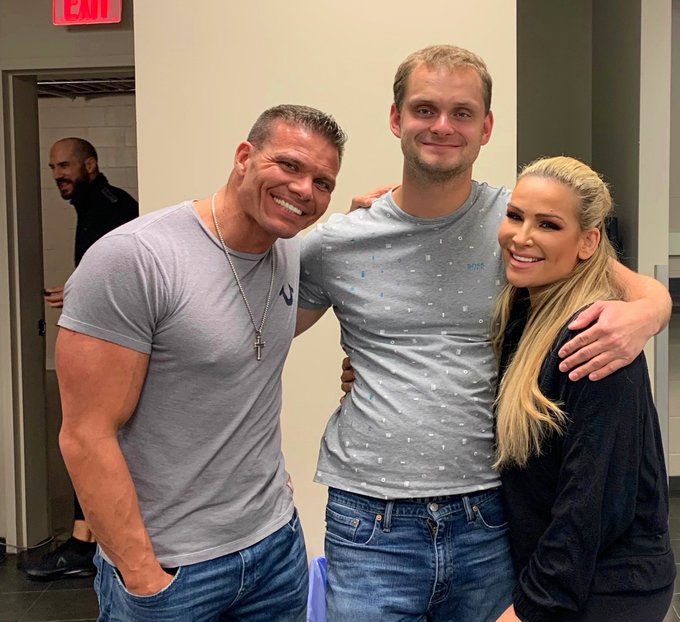 189 people are talking about this