Home / Miscellaneous / Dawn Marie on In Your Head Online

Dawn Marie on In Your Head Online 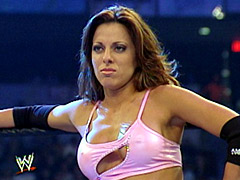 Dawn Marie made an appearance on In Your Head on Wednesday, September 10, 2008, with hosts Jack, OIB, and Barbie! Go to www.inyourheadonline.com to listen to the interview in its entirety.
The show opens up with Dawn Marie talking about Wrestlers Rescue, you can find out on the information about the event at www.wrestlersrescue.org. Get out and show your support for a wonderful cause.

Jack asks Dawn Marie about injuries. Dawn states “I am in pain everyday”. A caller then asks Dawn Marie if she had as much fun in WWE as she did ECW ” The experiences were like oil and water

“ECW a lot of learning and listening” “WWE more like using the tools that I had learned in ECW”. Jack then asks how Dawn Marie liked working for Paul “I love Paul he will be a friend for life”. Jack then asks if she watches the new ECW “No I don’t but I need to start I need to become a student of the game again”.

compare Paul and Vince as promoters “Paul was very hands on Vince can not always do that because of the size of his company”.

Dawn wraps up by saying that wrestlers rescue this is a great cause. If you’re a wrestling fan you can not beat this chance to meet some superstars and help out with a great cause. Check the whole line up out at www.wrestlersrescue.org

For a special price package please mention “In Your Head” when ordering, email wrestlers [email protected]
To hear the interview, head on over to www.inyourheadonline.com and remember to check out the show live every Wednesday 8pm EST where this week they’ll be joined by Tito Santana, and upcoming guests include Kevin Sullivan Brian Clark, Mike Dibiase, Mike Modest and more. You can also check out their 3 year interview archive which guests such as Mick Foley, Bruno Sammartino, Chris Jericho, Rob Van Dam, Terry Funk, Goldberg and Eric Bischoff.

Thanks to Jason Gaither of the Wrestling Mic