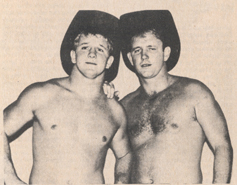 Few in the wrestling business will forget their “Debut Match” in professional wrestling.   I am sure this will be the case of Dory Funk IV (The Doctor of Funk, Dr. Dory Funk Jr.)

I can remember like yesterday my Debut match in Amarillo, with West Texas State University All American, Jerry Logan in my corner against Don Fargo with partner Jim Dalton in his corner.

Now on !BANG! TV the Debut Match of Dory Funk IV with Jimmy Hart in his corner and teamed with myself, and Johnny Magnum against Shane Chung, Damien Steele and Blain Rage with Sar-Ah.

Now on !BANG! TV at http://www.dory-funk.com, the “Debut Match of Dory Funk IV

Dory Funk Jr. is the coach of the Funking Conservatory Wrestling School, Host of the Online Reality Show “The Pencil” and trainer of WWE, TNA and Japanese Wrestling Talent.

For training schedules at the Funking Conservatory wrestling school, call 352-895-4658

More information is at http://www.dory-funk.com