Demolition to receive the first ever CAC Tag Team Award 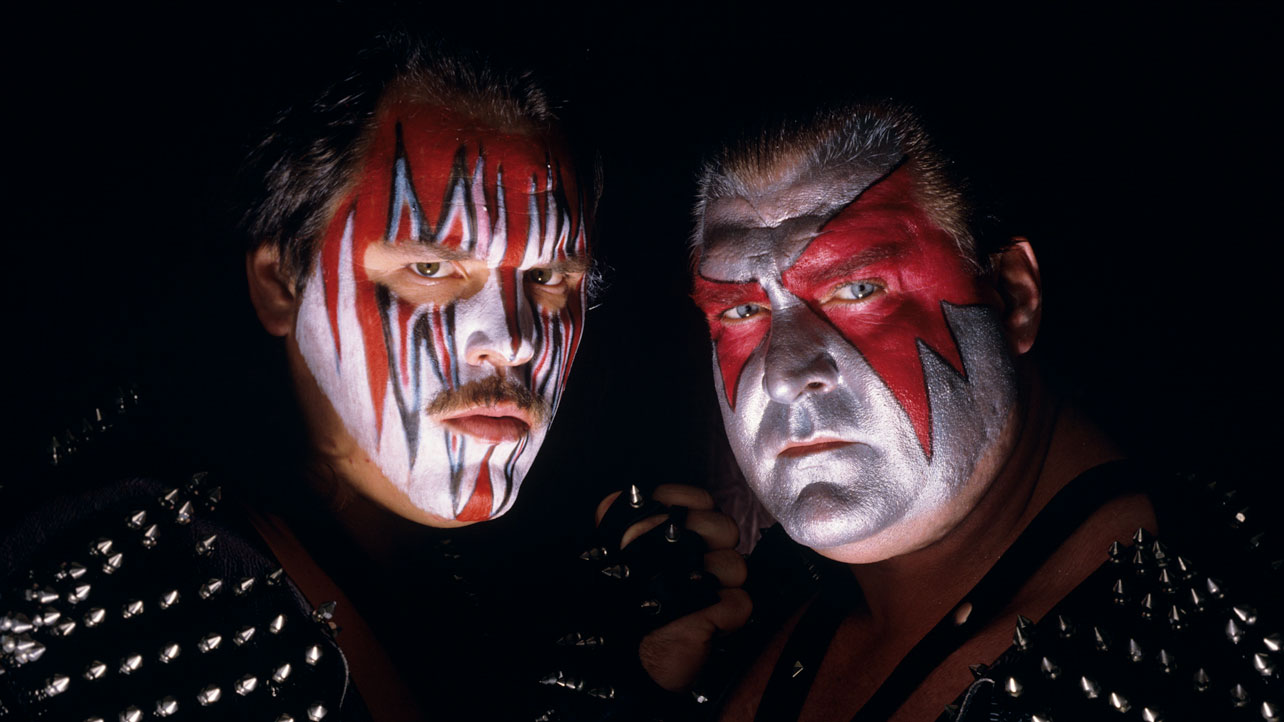 The Cauliflower Alley Club is excited to announce that Bill Eadie and Barry Darsow, collectively known as Demolition, will receive the first ever Tag Team Award at the 2015 CAC Reunion this coming April!

Bill and Barry will both in Las Vegas to accept their award!

Demolition was a prominent tag team during the late 1980s and early 1990s in the World Wrestling Federation. Bill Eadie (Ax) and Barry Darsow (Smash) debuted together in 1987 and quickly established themselves as one of the top teams in the WWF, no small feat considering the amazing teams in the promotion at the time, including the Hart Foundation, Killer Bees, British Bulldogs, and Rougeau Brothers.

Demolition looks awesome in their studded black leather outfits and hockey masks, which they removed to reveal scary face paint. Demolition would hold the then-WWF tag team championship three times, and they still hold the records for both the single longest tag title reign and the most combined days as reigning champions.

It is interesting to note that Randy Colley and Bill Eadie originally created the Demolition gimmick in 1987, but after a few matches Colley was replaced with Barry Darsow (perhaps in part because Colley was recognizable as Moondog Rex). Darsow then left Jim Crockett Promotions to take over the role of Smash.

Shortly after WrestleMania VI Brian Adams debuted in WWF and joined the team as Crush. It was explained that this was to gain a three-on-two advantage over other tag teams, but it was actually because Eadie had developed health issues and Vince McMahon needed a third member in case Eadie was out of action for an extended period of time. Ax did in fact leave WWE in 1990, effectively bringing an end to Demolition’s great run in the company.

On September 29, 2007, Barry Darsow and Bill Eadie reunited as the tag team Demolition for the first time in 16 years in Orlando, FL at a United States Xtreme Wrestling event. They once again became tag team champions, defeating the Christopher Street Connection (Buff-E and Mace) to win the UXW Tag Team Championship. They have been appearing at conventions and various wrestling shows ever since.

It is will great pride that the Cauliflower Alley Club honors this legendary tag team at the club’s 50th Reunion celebration. Congratulations to Bill Eadie and Barry Darsow, forever known as Demolition!

Watch these videos to relive some of Demolition’s most exciting matches: