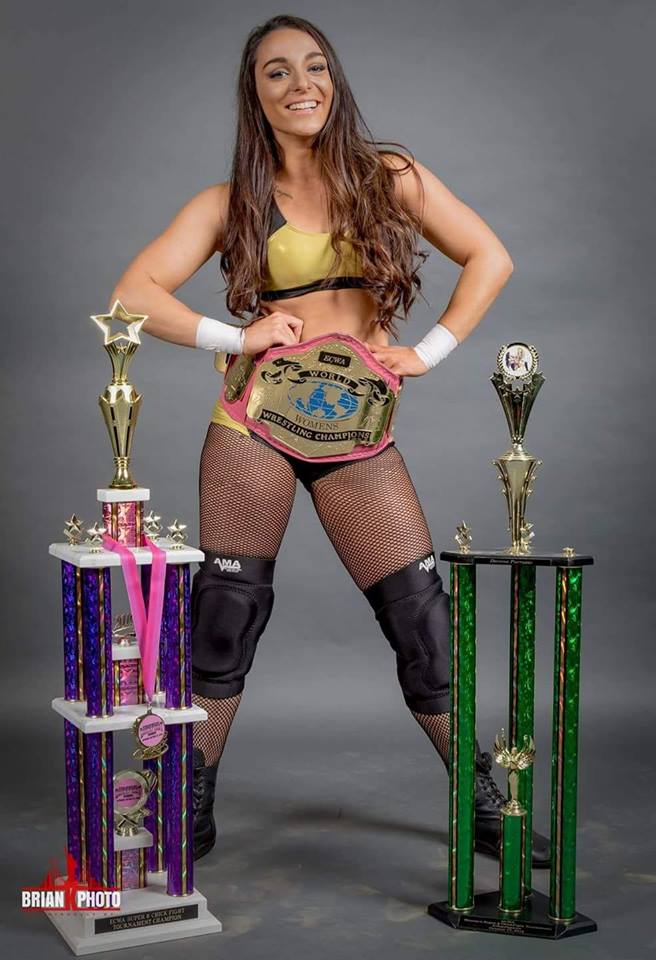 Indy wrestling history made as Deonna Purrazzo wins BACK TO BACK Super 8 Tournaments: First time ever in 20 years!

The ECWA Super 8 Tournament has long been the premiere tournament in all of independent wrestling. When Jim Kettner came up with the idea way back in 1997 there was no way he could have known how important the tournament would become. Young hungry talent with something to prove and veterans alike have all fought for the coveted Super 8 trophy and all that comes with it… exposure, recognition, and almost certainly extensive coverage in PWI magazine. The fast paced, hard hitting style of the tournament inspired a whole generation of wrestlers and even eventually led to the creation of ROH. Listing every major name that has taken part in or won the tournament would take far longer than this articles intent but here’s a brief review:

That is literally just the tip of the iceberg. All those names and a vast majority of them were talents who were just waiting for their first big break. They all went to dizzying heights in the wrestling business! The winners list is almost mind numbing to look at and a true testament to the influence of the Super 8. It’s crazy to think only one competitor has won more than one tournament though (Christopher Daniels) and not one person has ever won back to back tournaments. It had become almost a pipe dream. But as the years have gone by ECWA management, now owned by Mike Tartaglia, wanted to expand. And finally a new idea was created, a Women’s Super 8 Tournament!

Female wrestlers would finally get a grand stage to showcase their talents and show why they could be the next break out star! Flash forward and we just completed the third year! How is that important to the previous paragraphs facts? It’s because of this expansion that the unthinkable has happened… for the first time in 20 YEARS of history there has been someone to finally win BACK TO BACK Super 8 Tournaments!

Deonna Purrazzo herself is one of the fastest rising stars in the world today and certainly the hottest free agent in professional wrestling. She even came into the tournament as ECWA Women’s Champion. Why is she such a hot commodity? Because she was the 2015 Super 8 Chick Fight Tournament Champion! Since then she has traveled all over the place… ROH, TNA, WWE and even has an upcoming trip to Japan in 2017!

In the tournament though, Purrazzo was ALL BUSINESS. Dispatching Tasha Steelz and Kiera Hogan in the tournaments first 2 rounds, she eventually came to face off against Karen Q in the Super 8 Finals with HISTORY ON THE LINE! After nearly a half hour of battling back and forth and the fans literally biting their nails the unthinkable… the MOST SHOCKING… and the MOST UNFORGETTABLE moment in ECWA and Super 8 history took place…

Deonna Purrazzo locked in her arm breaker submission and Karen Q tapped out….

YES! YOU READ THAT CORRECTLY! DEONNA PURRAZZO IS THE FIRST PERSON IN INDEPENDENT WRESTLING HISTORY TO WIN BACK TO BACK SUPER 8 TOURNAMENTS!

Think about all those names previously mentioned… and a look at the full list of past Super 8 participants will give you pause and carries an immense amount of weight. Not a single one of the previous winners, male or female, ever won back to back tournaments!

Deonna has done it! The chiseled, immensely strong beauty has DOMINATED the ECWA landscape… actually indy wrestling in general… for well over a year and now the world will know her name forever! The Super 8 Tournament is all about showcasing talent, giving a wrestler a chance to unleash all they have mentally and physically and forever make their mark on wrestling history.

NO ONE over the last 2 years has emphasized those qualities more than Deonna Purrazzo. She’s sacrificed her body, soul, and mind to become a better, faster, stronger professional wrestler. She’s given up time with her friends and family traveling the country. And she’s proved time and time again she has the best work ethic in the world. All the training day after day after day and she still has a smile and kind word for anyone she encounters. The universe has a way of repaying that kind of determination and will.

And now, her name will become synonymous with the word CHAMPION!

20 years of history and no one accomplished what she just did! Independent history was forever changed last night on the back of one Deonna Purrazzo.