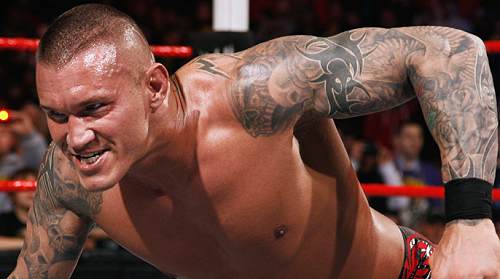 As we saw last night at Money In the Bank, Randy Orton suffered a head wound during the main event. WWE’s Dr. Chris Amann provided the following details on Randy Orton’s injury.

“We had an incident during the WWE World Heavyweight Championship Ladder Match where Randy was struck in the head with the ladder, which caused a laceration to the top of his scalp. I evaluated him immediately after the incident. He did not show any signs of a concussion, so what we did ringside was to stop the bleeding with a mixture of Vaseline and epinephrine – which is also known as adrenaline. By putting that in the wound and by applying direct pressure, we were able to get the bleeding to stop, so he could finish the match.”

“Immediately after the match, we brought him back to the training room where we thoroughly cleaned the wound and put 11 staples in his head. We are going to monitor him for any signs of neurological changes and we’ll follow up with him tomorrow at Raw in Hartford, Conn.”