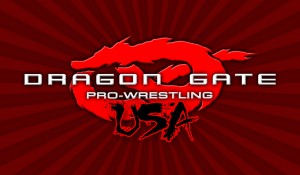 We are just three weeks away from the return of Dragon Gate USA. We have updated lineups for both July 28th in the Detroit area and July 29th in Chicago, an update on EVOLVE and more. No need to hesitate, let’s get to it….

July 6th: The 40% off sale at DGUSA.tv continues until Monday at midnight EST. This will be our last sale this big until Black Friday.  The sale includes all DGUSA/EVOLVE DVDs, shirts and merch.  You can include the new DGUSA Open The Golden Gate DVD pre-order with this huge sale.  There is no minimum order. To take advantage just enter the code “40% off” in the special instructions when you check out in DGUSA.tv Store or say it when you call 267-519-9744

July 6th: The Super Smash Brothers of Player Uno and Player Dos have been added to both the 7/28 Taylor, MI and 7/29 Chicago, IL events. 2012 has been their year and now this cutting-edge tag team is set to debut in Dragon Gate USA. We’ll have more next week.

July 6th: We have four upcoming live iPPVs at WWNLive.com that you can pre-order right now. Check out the debut of SHINE Wrestling all women’s promotion on July 20th. $5 Wrestling: Train Wreck is live on July 27th. Dragon Gate USA returns to action with two live iPPVs on July 28th and July 29th. There are three pricing options for all four iPPVs to fit your budget. You can also make money at no risk on all WWNLive iPPVs. Go to the WWNLive.com Affiliate section for all the info.

July 6th: Former Open The Freedom Gate Champion YAMATO is set to finally return to Dragon Gate USA for the first time since losing the title to Johnny Gargano last November. YAMATO, who was one of the building blocks of DGUSA, has made it clear he’s coming to take his top spot back. He has backed this up by signing two very tough matches later this month. We have all the info right now.

July 6th: YAMATO vs. Ricochet is set for July 28th in Taylor, MI.  The card has Johnny Gargano vs. Akira Tozawa for the DGUSA Title, CIMA & AR Fox vs. El Generico & Samuray Del Sol and YAMATO vs. Ricochet. We’ve only just gotten started and will have most of the card announced next week. The best seats are almost gone so get your tickets now!

July 6th: YAMATO vs. Jon Davis has been signed for July 29th in Chicago, IL.  This is a very interesting match. Davis is coming off the huge Style Battle victory, but still needs wins or he will walk away from wrestling. YAMATO is one of the top names in DGUSA and Dragon Gate. Can Davis defeat YAMATO?  Ricochet & Rich Swann to determine the new Open The United Gate Champions, El Generico vs. Akira Tozawa one-on-one and YAMATO vs. Jon Davis. We’ll have more huge matches announced next week. Don’t miss your only chance to see DGUSA in the Midwest this year! Chi-town is one of our homes and we can’t wait to return!

It’s going to be a busy month for Mad Blankey. Christina Von Eerie is set for the SHINE debut on July 20th. Akira Tozawa will challenge Johnny Gargano for the DGUSA Title on July 28th and then face El Generico on July 29th.  Can Mad Blankey be stopped?

We appreciate you taking a few moments to read the DGUSA/EVOLVE Alerts.  We’ll be back early next week with more matches for Detroit & Chicago, the latest on EVOLVE, a free match and the return of the Deal Of The Day. Have a great weekend!