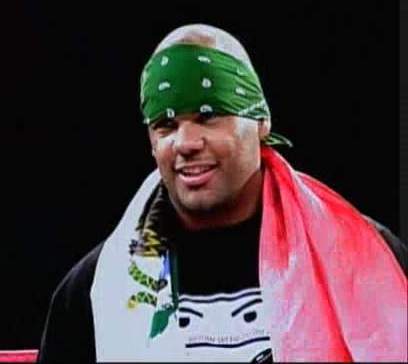 Jon Moxley sent in this promo about Homicide and all of New York City: http://www.youtube.com/watch?v=kipB5sfwNL0

Here’s an article from www.DGUSA.tv looking at the Homicide vs. Jon Moxley feud:

The issue between Homicide and Jon Moxley is personal. The next chapter of this violent feud will be at Dragon Gate USA on January 30th in Union City, NJ at The ACE Arena when Homicide and Moxley collide in a No Rules Match (tickets on sale now in DGUSA.tv Store or 267-519-9744).

First, let’s get some perspective on this feud that has transcends promotions. Before signing with TNA a few years ago, Homicide could be called “The King Of The Independents.” He wrestled everywhere, won titles in all the top promotions and was in some of the era’s most memorable feuds. Homicide vacated his thrown to have a successful run as part of LAX in TNA, although ultimately politics did Homicide in. Just a few months ago he returned fulltime to the independents.

Only now there was a brash, cunning and fearless renegade sitting in his thrown. Jon Moxley spent 2010 working as many independent promotions po ssible, winning titles everywhere he went and being in notable feuds, particularly against Jimmy Jacobs.

The first inevitable face-to-face meeting of Homicide and Moxley came at “EVOLVE 5: Danielson vs. Sawa” on September 11th. The tension was immediately evident. Moxley sent a simple message to Homicide. There was a new king and he was going to make his reputation at the expense of the old king.

Jon Moxley fired the first shot on live iPPV at “Bushido: Code Of The Warrior” on October 29th. Homicide joined World-1 as part of the draft, Moxley jumped him later on the show when Homicide was cutting a promo.

This led to Homicide teaming with Open The Freedom Gate Champion BxB Hulk to take on Moxley and Akira Tozawa at the DGUSA “Freedom Fight 2010” pay-per-view, taped on October 30th. Moxley and Homicide battled back-and-forth during the match, but it was the post match where things got out of control. The two fought around the building in an intense brawl that ended when Moxley took advantage of Homicide’s bad shoulder. Moxley injured Homicide with a vicious attack on the shoulder, causing Homicide to miss bookings the next weekend. Moxley then explained the whole situation in his own terms here: http://www.youtube.com/watch?v=DvUG-_YjNLI

The now boiling feud went back to EVOLVE on November 20th for “EVOLVE 6: Aries vs. Taylor” at the ACE Arena in Union City, NJ. EVOLVE officials, already fearing that this issue would get out of control, agreed to make this a Relaxed Rules Match. After a controversial win by Moxley, Homicide snapped and attacked Moxley. The scene was indescribable as Moxley refused to break EVOLVE rules and fight back, allowing Homicide to brutally assault him for around 10 minutes. You can witness this for yourself with this free download: ht tp://www.megaupload.com/?d=1DLYPD3Z

As a result, EVOLVE fined Homicide his entire night’s pay. Moxley was even rewarded some of Homicide’s pay for showing restraint. Needless to say, this has fueled Homicide’s rage even more.

Now Homicide and Moxley will return to the scene of their last meeting- The ACE Arena, just minutes from the Lincoln Tunnel and right next to Homicide’s hometown of New York City. This time the ante will be upped again. The match on January 30th will be No Rules.

New York City and North Jersey is where Homicide first claimed his throne years ago. Now Moxley is sitting in it. The battle lines have been drawn.